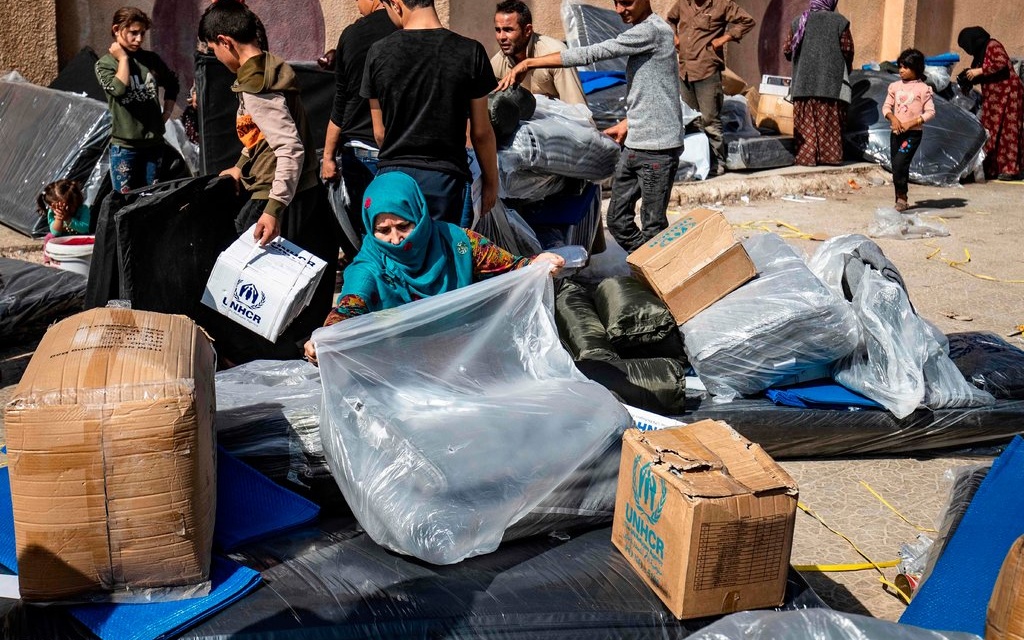 Displaced civilians receive humanitarian aid Tal Tamr in northeast Syria, before the closure of a crossing from Iraq in January 2020 (Delil Souleiman/AFP/Getty)

Russia has rejected the reopening of crossing points for aid into parts of Syria outside Assad regime control.

The UN Security Council discussed the humanitarian situation on Tuesday. Aid chief Mark Lowcock called for renewed authorization of deliveries through two border crossings from Turkey, a “lifeline for millions of civilians”.

But Russian UN Ambassador Vassily Nebenzia cautioned the Council: “Do not waste your time on efforts to re-open the closed cross-border points.”

In January, Russian and Chinese vetoes closed crossing points from Iraq and Jordan. Moscow allowed the continuation of the two Turkish points, used for aid operations since 2014, but only for six months.

The meeting was also hindered by tension between China and the US over the Coronavirus pandemic.

US Ambassador Kelly Craft pressed China “to validate its claims of global leadership in combating COVID-19” by supporting the resolution allowing aid deliveries.

China’s Ambassador Zhang Jun told the Trump Administration to “stop playing political games and really focus on saving lives and stop diverting [from] its own responsibilities to other countries”.

The UN Office for the Coordination of Humanitarian Affairs reported last Friday that, of more than 1 million civilians displaced northwest Syria by an 11-month Russia-regime offensive, about 840,000 are still without a home. Among them are 500,000 children and almost 180,000 women.

Longer-term needs are increasing, including for health, nutrition and education services, even as urgent needs for shelter, food, water, sanitation, hygiene and protection remain.

The OCHA noted that the humanitarian situation in the northwest is “increasingly desperate” because of soaring inflation, fed by the collapse of the Syrian Pound.

Syria has lost 75% of its GDP in the nine-year conflict. The Assad regime has carried out little reconstruction, despite the Russian-enabled reoccupation of much of the country. The crisis is being exacerbated by a cut-off of funds from Lebanon, where the banking system is in turmoil.