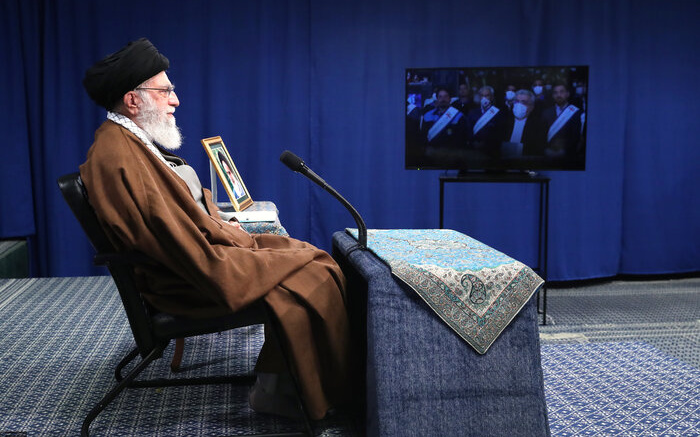 Renewing his emphasis on Iran’s damaged economy, the Supreme Leader has declared that increased production can “neutralize” Coronavirus.

Ayatollah Khamenei repeated his Iranian New Year slogan of a “Surge in Production” in a call to manufacturers on Thursday.

He played down the threat from the virus, as Iran’s death toll nears 6,500 and cases increase after limited re-opening of public spaces in the past month.

This very coronavirus entered people’s bodies, but many did not fall ill. How did that happen?

Should we liken the economy to human body, the defense system that provides the economy with security would be production. In other words, the element that can neutralize invasive viruses and microbes targeting the economy and keep it healthy is production.

Without giving any medical explanation of his theory, Khamenei restated his call for a self-sufficient “Resistance Economy”.

“If we have good production, we can resist these viruses,” he repeated.

The official daily increase in cases, which had fallen to 802 on Saturday, was 1,485 yesterday.

Iran is facing a crisis over production, investment, trade, employment, and currency. Oil exports have fallen between 80% and 95% since April 2018 amid comprehensive US sanctions, and petrochemical exports are down 30%.

In November, protests across Iran challenged economic conditions after the Government suddenly raised petrol prices between 50% and 200%. Security forces killed hundreds of demonstrators.

The Government reopened “low-risk” businesses across Iran on April 11, and in the capital Tehran on April 18. Worshippers were allowed back into mosques and shrines from Monday.