Trump-Russia: Trump and Barr Try to Quash Rule of Law in Flynn Case 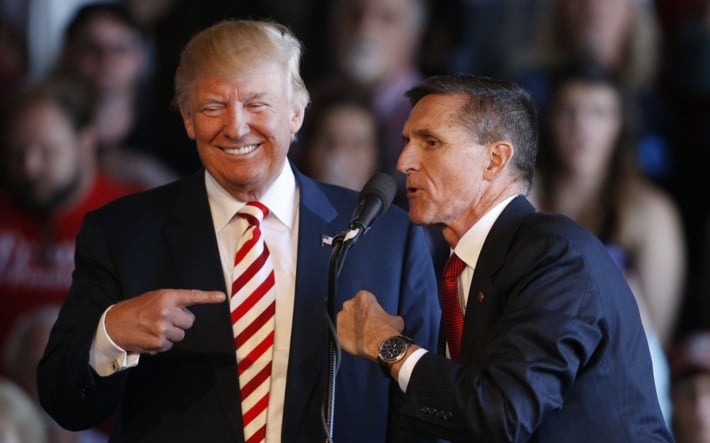 Donald Trump with Michael Flynn during the 2016 Presidential campaign

Donald Trump and Attorney General William Barr tri to quash the rule of law in the case of former National Security Advisor Michael Flynn, with the Justice Department dropping charges despite Flynn’s two guilty pleas of lying to the FBI.

Attempting to bury links with Russia during the 2016 Presidential campaign, Trump has campaigned for months with accusations against the FBI, supported by Barr’s political intervention.

Last month, an extract was leaked of the FBI approach to questioning of Flynn over his December 2016 phone conversations with Russian Ambassador Sergey Kislyak, promising to lift Obama Administration sanctions on Moscow.

Taken out of context, the brief note was represented by Trump’s allies as an attempt to entrap Flynn into lying.

Barr, appointed by Trump in January 2019 in part to limit the Trump-Russia investigation of Special Counsel Robert Mueller, assisted the campaign with a review of the FBI. Flynn’s lawyers handed over documents which they claimed were evidence of prosecutorial misconduct.

On Thursday, as the lead prosecutor in Flynn’s case resigned, the Trump-Barr effort finally paid off.

Acting US attorney in Washington Timothy Shea, a Barr ally appointed in Feburary, argued that Flynn’s lies were irrelevant because the FBI’s investigation of Russia interference was illegitimate:

The government is not persuaded that the Jan. 24, 2017, interview was conducted with a legitimate investigative basis and therefore does not believe Mr. Flynn’s statements were material even if untrue.”

Prosecutors in Shea’s office were stunned by the decision, according to “a person who spoke with several lawyers in the office”.

Judge Emmet Jackson will now decide whether to accept the Justice Department’s retraction.

Last December, Sullivan rejected the claims by Flynn’s attorneys of FBI misconduct and refused to quash the conviction. He found that the investigators had not entrapped the Trump advisor.

The Justice Department’s Inspector General found that the FBI had sufficient evidence to investigate Flynn as part of the Russia inquiry.

Legal experts and former prosecutors said the dropping of the charges, after Flynn’s guilty pleas in December 2017 and in 2018, was without precedent.

Until Thursday the Justice Department’s prosecutors had argued that Flynn’s conversations with Russian Ambassador Kislyak “went to the heart” of the Trump-Russia investigation.

I have been in and around DOJ since 1983. I have never seen a case dropped after someone has pled guilty and the underlying facts demonstrate beyond any shadow of a doubt he is guilty. This is simply a pardon by another name. A black day in DOJ history.https://t.co/UkfdNbY7Ld

Flynn was National Security Advisor for 21 days but was fired in February 2017 over the lies.

But Trump, concerned that his former senior campaign advisor might “flip” and cooperate with investigators, used Twitter and public statements to proclaim that Flynn was a victim of a corrupt FBI.

Trump continued the barrage on Thursday, portraying an Obama Adminstration plot to “take down a President”.

I hope a lot of people are going to pay a big price because they’re dishonest, crooked people. They’re scum — and I say it a lot, they’re scum, they’re human scum. This should never have happened in this country.

“Two people familiar with the discussions” said the White House was prepared as late as last week for Trump to pardon Flynn, despite the political fallout. However, Trump advisors urged him to wait for the judicial developments.

Barr insisted that he was “doing the law’s bidding” and trying to “restore confidence in the system”. He said the Justice Department did not brief the White House before it dropped the charges.

He justified his acceptance of Flynn’s lies: “People sometimes plead to things that turn out not to be crimes.”