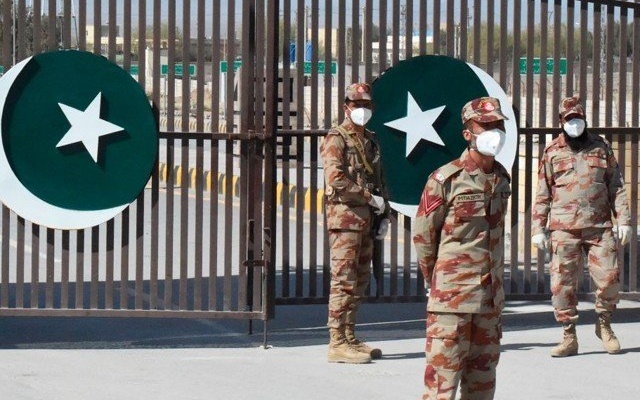 Pakistani soldiers on the closed Iran border in Taftan (AFP/File)

Facing a crippled economy, Iran seeks to reopen borders with neighboring countries amid the Coronavirus outbreak.

President Hassan Rouhani spoke Friday about talks with leaders of the countries about “willingness to resume border exchanges and transportation of goods”. He instructed the Roads and Urban Development Minister to make necessary arrangements.

The Government proclaimed on Tuesday that goods have started to move across land borders with Iraq, Turkey, Armenia, Azerbaijan, Afghanistan, and Pakistan, and that maritime routes have resumed with the UAE, Kuwait, Qatar, and Oman.

Following China, Iran was an epicenter of the outbreak in February. However, with the regime slow to respond as it claimed a “Western plot” to spread fear, neighboring countries blocked movement of people and goods.

But with oil exports sharply reduced and a fall in other trade and investment, the International Monetary is projecting an 11% contraction in Iranian GDP this year, on top of a 7.6% fall in 2019. The Supreme Leader has called for a year of “Surge in Production” despite the virus.

The Government has ordered the reopening of “low-risk” businesses. Last weekend Rouhani divided the country into white, yellow, and red zones for phased resumption of activity.

On Friday, Rouhani emphasized completion of unfinished initiatives, saying “necessary measures should be taken to complete the projects with more than 80% physical progress”.

He said four million tons of basic goods, currently at customs, must be released as soon as possible.