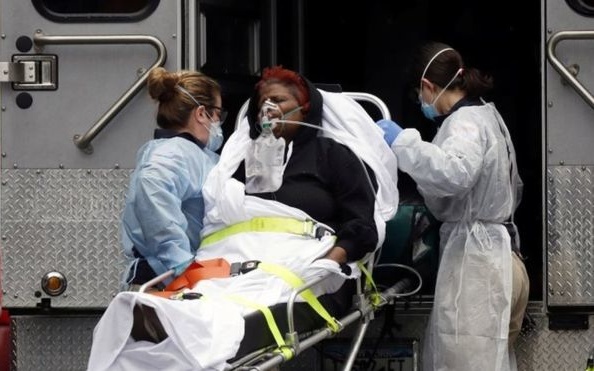 US deaths from Coronavirus pass 5,000, an increase of more than 1,200 in 24 hours, amid fears of an exhaustion of essential medical supplies.

Donald Trump passes the problem to State Governors, saying that it is up to them to get the supplies.

Vice President Mike Pence acknowledges that America could be on the same path as Italy, where more than 13,000 people have died, but pushes back on any blame of the Trump Administration for inaction and mismanagement. Instead, Pence tries to pin responsibility on China and the US Center for Diseases Control and Prevention.

State and local officials have warned for weeks that they need masks, personal protective equipment, and life-saving ventilators as they face the surge of cases. But the Administration has refused to coordinate supply: Donald Trump initially denied any serious situation and then put out disinformation as he assailed Governors for making requests.

Even as he belatedly acknowledged the virus, Trump said on Tuesday, “For some people, no matter how much you give, it’s never enough.”

“We Simply Do Not Have the Capacity”

New York Gov. Andrew Cuomo pleaded on Wednesday, “Really, the only hope for a state at this point is the federal government’s capacity to deliver.” He said that, at the anticipated apex of the outbreak at the end of April, the state would need 37,000 ventilators and 75,000 beds.

“The truth is…we don’t even have a chance at meeting that capacity,” Cuomo admitted.

He estimated that an additional 2,500 to 3,000 ventilators will be required by next week.

California Gov. Gavin Newsom said that, despite aggressive social distancing and a relatively low number of deaths, the state will run out of hospital beds in mid-May. He noted that 774 patients are in intensive care, a 16% increase in one day.

Colorado Gov. Jared Polis said the state is talking to Chinese factory owners and others about supplies:

We know that not having gotten nearly enough from the federal government, we have really taken it upon ourselves as a state to engage in the purchasing of medical equipment.

We simply do not have the medical capacity, the beds, hospital beds, ICU units, ventilators, personal protection equipment to treat everybody who might get sick and have the potential to get better.

Connecticut’s Ned Lamont described a desperate effort: “We’re scrambling at this stuff. We’ve got it on the tarmac, then it’s rerouted we have it ready for delivery and then it’s put off for another week and it’s a bit of a mess out there, and you’re playing with people’s lives.”

One official said, “The stockpile was designed to respond to handful of cities. It was never built or designed to fight a 50-state pandemic.”

A “senior administration official” confirmed the exhaustion. Some states reported that ventilators, finally delivered by the Administration, did not work.

Trump: “Some States Don’t Have A Problem”

The greater New York area continues as the epicenter of the virus. New York State recorded 391 deaths on Wednesday, bringing its total to 1,941 amid 83,712 confirmed cases. New Jersey reported at least 85 new deaths.

But bearing out the warning of new “hotspots” by the Administration’s top medical specialists, Drs Deborah Birx and Anthony Fauci, Michigan confirmed more than 75 deaths yesterday.

Stay-at-home orders spread across the nation, with even reluctant Governors conceding the necessity of the social distancing. Florida Gov. Ron DeSantis a fervent Trump supporter, was among the latest State leaders to join, after resisting calls for the closure of beaches and statewide restrictions.

On Wednesday, Florida’s toll surged to 7,773 cases, fifth-largest in the US. There have been 101 deaths.

Georgia’s Kemp and Nevada Gov. Steve Sisolak also issued orders on Wednesday. More than 80% of Americans are now covered by the State restrictions.

But in the daily White House briefing, Trump balked at any national order. Instead, he flanked himself with security officials and spoke about counter-narcotics operations.

Asked about the shortage of vital supplies, Trump acknowledged that the national stockpile is nearly depleted — “We are sending it directly to hospitals” — and said, “I tell the governors, get it yourself, if you can.”

And when he did address the question of a national restrictions on movement, Trump falsely proclaimed:

Surgeon General Jerome Adams tried to cover the President’s reluctance, in a Wednesday morning interview: “My advice to America would be that these guidelines are a national stay-at-home order. There are guidelines that say, look, the more we social distance, the more we stay at home, the less spread of disease there will be.”

Pressed about why the Administration was so late in dealing with the crisis, Vice President Pence tried to throw the nation’s top disease specialists under the bus.

I will be very candid with you and say that in mid-January the CDC was still assessing that the risk of the coronavirus to the American people was low. The very first [US] case, which was someone who had been in China – in late January around the 20th day of January.

He hailed Donald Trump for actions such as a travel ban on people coming from China, But he ignored Trump’s declaration of a Democrat “hoax” and a virus that would soon pass, as well as the Administration’s bungled attempt to begin testing in February.

Instead, he diverted attention to Beijing: “The reality is that we could’ve been better off if China had been more forthcoming….[The] outbreak was real in China… long before the world learned in December.”

Pence did not note that Chinese officials warned the CDC on January 3 of the seriousness of the outbreak, which began in the city of Wuhan.