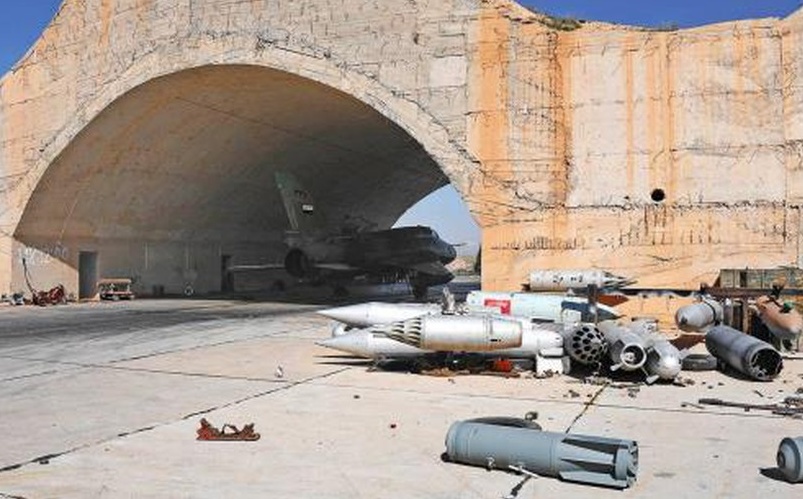 Damage at the Assad regime’s Shayrat airbase in Homs Province after US strikes, April 7, 2017

The report, circulated by Middle East Monitor, offers an explanation for the firing of eight missiles on Shayrat Airbase in Homs Province.

State news agency SANA put out a template statement about the attack, claiming that a “number of missiles” were downed by air defenses. The Israel Defense Forces rarely comment on their operations.

Shayrat launched a sarin attack against opposition-held Idlib Province in April 2017, killing about 90 people and wounding hundreds. The US bombed the base days later. Last August, as Israel was attacking regime and Iranian positions across Syria, explosions inside the base killed at least 28 regime personnel: the regime military claimed the detonation was from an ammunition depot which overheated.

Israel has carried out hundreds of missile strikes inside Syria since the Syrian uprising of March 2011 against Assad regime, Iranian, and Hezbollah targets. Since 2017, as Prime Minister Netanyahu demanded complete Iranian military withdrawal, the Israeli forces have been focusing on Iranian bases and personnel, repeatedly hitting targets near Damascus and in central and northwest Syria.

Regime media makes no further comment on the incident this morning, instead devoting headlines to Coronavirus.

The regime raised the death toll to two and the number of cases to 16.

Health Minister Nizar Yazaji said that the hometown of the second confirmed casualty has been locked down.

He said the victim and her family ran a shop in Mnin in Damascus. He claimed they did not observe a quarantine as they “continued to sell at their shop and got in touch with the locals in the area, including people who had “come from Lebanon illegally”.

He said the husband and children of the dead woman have been tested.

SANA portrays Saeed Abid as being optimistic that regime measures for social distancing will limit the virus if there is “citizens’ commitment to the procedures”.

This week the regime imposed a 6 pm-6am curfew across all its territory and banned movement between provinces. Schools, universities, and institutes are closed; bakeries are shut; and public transport banned. On Sunday, the military suspended the call-up of army reserves.

But UN aid chief Mark Lowcock warned on Monday the regime’s official toll is only “the tip of the iceberg” of the actual spread of the virus.

SANA uses Saeed Abid to chide US and European Union sanctions, imposed on the regime over its deadly repression of the uprising: “The WHO seeks to lift the coercive measures imposed on Syria that affects the health sector in the country.”