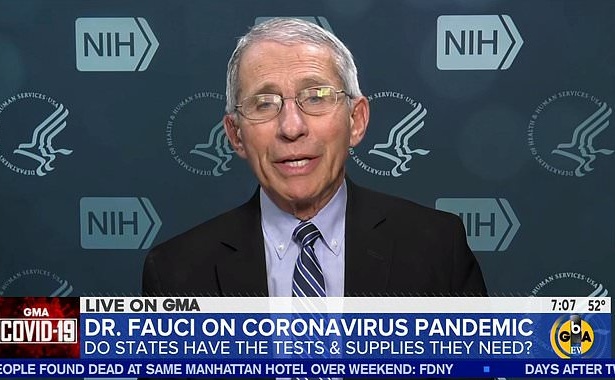 Dr Anthony Fauci: “Unless we get the virus under control, the real recovery economically is not going to happen”

Flailing over his mismanagement of the Coronavirus crisis, Donald Trump declares that he is suspending immigration into the US.

Trump’s Twitter announcement came at the end of a Monday when:

*White House medical expert Dr. Anthony Fauci again knocked back Trump’s aspiration to “re-open” the US by May 1

In light of the attack from the Invisible Enemy, as well as the need to protect the jobs of our GREAT American Citizens, I will be signing an Executive Order to temporarily suspend immigration into the United States!

Trump gave no further explanation of how the immigration ban would check Coronavirus, which has now killed at least 42,364 people in the US, or how it would protect jobs after 22 million Americans have filed for unemployment in the past four weeks.

Led by White House advisor Stephen Miller, the Adminsitration has distinguished itself with its anti-immigration and xenophobic statements and policies. Trump has stigmatized undocumented immigrants as “animals” and justified the separation of children and parents.

However, while the number of visas issued to aspiring immigrants has declined by about 25%, there were still 462,422 granted in 2019.

This action is not only an attempt to divert attention away from Trump’s failure to stop the spread of the coronavirus and save lives, but an authoritarian-like move to take advantage of a crisis and advance his anti-immigrant agenda. We must come together to reject his division. https://t.co/wYEai4rYVY

Rep. Eric Swalwell echoed: “He wants us to think our pandemic is the fault of immigrants & other nations. But we’re in this crisis- 42k-plus deaths & a faltering economy as other nations did better- due to his failures of foresight & leadership, & his ongoing failure to take responsibility & accept reality.”

Fauci, the director of the National Institute for Allergy and Infectious Diseases, told ABC News:

If you jump the gun and go into a situation where you have a big spike, you’re gonna set yourself back. So as painful as it is to go by the careful guidelines of gradually phasing into a reopening, it’s going to backfire. That’s the problem….

Unless we get the virus under control, the real recovery economically is not going to happen.

White House medical advisors have said that the current orders could limit the death toll to 60,000 by August. However, if the measures are lifted completely, up to 300,000 deaths are expected.

Trump has undercut the experts at his daily briefings, and since last Friday he has encouraged illegal protests in several states against the stay-at-home orders.

Trump struggled again over the Administration’s failure to organize the 500,000 daily tests needed for any containment of Coronavirus.

With shortages of testing kits and chemical reagents in parts of the US, testing has plateaued at 150,000 per day.

Trump falsely said that the US leads the world in testing —Germany is at 1.6% of its population, with the US only at 1% — and rambled that the medical experts were excessive in their assessments.

Not everybody believes we should do so much testing. You don’t need so much. We’re talking about maximum, maximum.

The reason that the Democrats and some others, maybe, because they don’t know, they want maximum because they want to be able to criticize, because it’s almost impossible to get to the maximum number, and yet we’ve been able to do it already.

His latest attack on a Governor was on Maryland’s Larry Hogan, a Republican, after the state spent about $9 million to purchase 500,000 tests from South Korea.

The most critical building block of our recovery plan for Maryland is the ability to do widespread testing. The incredible success of this operation has not only put us on track to achieve that goal, but it will literally help save the lives of thousands of Marylanders.

Pence and White House Coronavirus coordinate Dr. Deborah Birx had spoken on Monday morning with governors about the testing capacities of their states.

But Hogan noted, “We already knew where the labs were. Most of the ones on that list were federal labs. We’ve been pushing to get NIH [the National Institutes of Health] to help us with testing for more than a month now.”

He added, “The administration made it clear over and over again they want the states to take the lead, and we have to go out and do it ourselves, and so that’s exactly what we did.”

Trump also lashed out at Illinois Gov. J.B. Pritzker, declaring that the governor “didn’t understand” his own state’s testing capacity.

Former Food and Drug Administration chief Scott Gottlieb said Monday that the US will need about 3 million tests per week, while Harvard researchers assessed that the US must conduct between 500,000 and 700,000 tests per day by mid-May to begin reopening.

But Trump used Twitter to dismiss the medical conclusions:

… “Testing, Testing, Testing,” again playing a very dangerous political game. States, not the Federal Government, should be doing the Testing – But we will work with the Governors and get it done. This is easy compared to the fast production of thousands of complex Ventilators!

Cuomo: A “Descent” in Cases

New York Gov. Andrew Cuomo, another Trump target, offered better news on Monday about the state, where 18,653 people have died amid 253,311 confirmed cases.

Cuomo said that New York appears to be on “the descent” of the curve of cases, with several days of reductions in hospitalizations and intubations.

However, he cautioned, “The number’s coming down, but how fast is it coming down?” And he reminded viewers that, with another 478 New Yorkers dying on Sunday, the daily toll continues to be the worst news.

Cuomo, who has challenged Trump over the lack of Federal assistance, is scheduled to visit the White House today.

In Michigan, with the third-highest US toll, Gov. Gretchen Whitmer continues to hold public support despite Trump’s attempt to stir up protests.

A survey showed 57% of Michigan residents approve of Whitmer’s handling of the crisis, compared to 44% for Trump.

On Friday, Trump tweeted, “LIBERATE MICHIGAN”, and similar messages for Virginia and Minnesota Two days later, hundreds of demonstrators defied social distancing and gathered outside the state capital in Lansing. chigan, a swing state that narrowly voted for Trump in 2016, still trust her over the president amid this crisis.