“Murder Most Foul”: Dylan, JFK, and the Ephemeral “America” 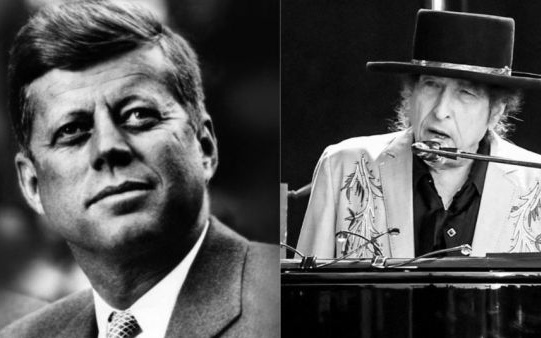 “This is a dispatch from the invisible republic. It is both a balm and a beacon. Today, we need both.”

This is the latest preview from the American Unfiltered project, a partnership between University College Dublin’s Clinton Institute and EA WorldView, which will be launched formally later this month:

Our history has moved on two rivers, one visible, the other underground; there has been the history of politics, which is concrete, factual, practical, and unbelievably dull…and there is a subterranean river of untapped, ferocious, lonely, and romantic desires, that concentration of ecstasy and violence which is the dream life of the nation.

In Kennedy, Mailer saw an “existential hero” who could fuse these historical and mythic currents and potentially renew the nation. It is a perversely romantic vision, doomed to fail in 1963, but also perpetuated by Kennedy’s death.

For many American writers, filmmakers and songwriters, Kennedy’s death marks an abysmal rupture in the fabric of the nation, a primal scene that has had ripple effects across American culture and politics to the present. And now Bob Dylan has revisited that scene in a 17-minute song titled “Murder Most Foul”, which he dropped without fanfare in late March 2020.

Dylan is the bard of America’s dream life. He has been tapping into the national unconscious for nearly 60 years, projecting what Greil Marcus calls an “invisible republic” of alternative American realities, mythic landscapes, and marginal lives. With “Murder Most Foul”, a sprawling, elegiac ballad, he moves freely across that dreamscape, always circling back to Dallas in 1963, marking out its traumatic nature through compulsive return and repetition.

The song begins descriptively if mawkishly with the moment of Kennedy’s death – “Twas a dark day in Dallas, November 63” – and slowly, allusively spins out of that moment and across a deep history of American popular culture. There are several references to Shakespeare along the way, including the song’s title, from Hamlet. It also marks iconic moments of “the 60s”, from “The Beatles are comin’, they’re gonna hold your hand” to the violent denouement in Altamont, and name-checks Little Richard, Johnny Cash, Oscar Peterson, Beethoven, Houdini, Buster Keaton, Marilyn Monroe, Warren Zevon, Stevie Nicks, Lady Macbeth and many, many more.

In lieu of a coherent narrative there are repeated allusions to debts and dread and death, to time running out. Do we want to hitch a ride in “a long, black Linclon limousine”, not only Kennedy’s hearse but America’s? Are we moving towards redemption or a reckoning or both? The language becomes apocalyptic:

The day they killed him, someone said to me, “Son, the age of the Antichrist has just only begun”….

The soul of a nation’s been torn away, and it’s beginning to go into a slow decay… It’s 36 hours past Judgement Day.

The song itself is barely a song, more a dirge with minimal instrumentation. Dylan’s voice is the key instrument, its sardonic tone suggesting a weary witness to humanity’s ruin. The performative effect is a bit flat in the first half but then it turns into something deeper and more captivating as Dylan repeatedly asks for songs to be played, like a preacher asking for prayer.

Play Jelly Roll Morton, play “Lucille”. Play “Deep in a Dream”, and play “Driving Wheel”. Play “Moonlight Sonata” in F-sharp. And “A Key to the Highway” for the king of the harp.

This becomes a litany of requests as Dylan treats the cultural history of the US like a jukebox, asking for songs across genres and periods. Dylan fans have been busy decoding the significance of the requested songs, but the song’s fuller meaning and Dylan’s intent remain elusive as is his wont.

The deeper meaning is in the fluid associations and reverberations, as Dylan rhythmically and lyrically maps the dreamscape of the invisible republic. He underscores the role of jeremiad he has long played, calling the nation to its better self, while recalling Kennedy’s visionary contract, “Don’t ask what your country can do for you,” and its deferral, “I’m never gonna make it to the new frontier.”

No critic better understands and explores this aspect of Dylan than Greil Marcus, who has long been a key guide to Dylan’s distended corpus and has a talent for following songs to their often-hidden roots. He proposes that acted out in the songs and performances is a vision of democracy, but not a democracy of politics and governance. It is instead a democracy of voices from marginalized and disdained communities, “a weird but clearly recognizable America within the America of the exercise of constitutional majoritarian power”.

For Marcus, and I think for Dylan, America is not reflected in popular music, it is produced by it. The music constantly recycles the myths of America, remaking the invisible republic. It is not only redemptive but also constitutive, positing counter-narratives and creating counter-publics, acting both as a balm of empathy and a beacon of protest. Moreover, it creates a national fugue into which Dylan has written and sung himself – the last song request of “Murder Most Foul” is “Play ‘Murder Most Foul’.”

In listening to “Murder Most Foul”, I was reminded not only of many other songs but also of literary representations of the invisible republic. I thought in particular of a novel by Steve Erickson, Shadowbahn, published in 2017.

Shadowbahn is difficult to summarize or to define in genre terms; it is part fantasy, part road novel, part science fiction, part music criticism, and part prose poem. It risks incoherence, if it is about anything it is about a country losing its bearings.

The novel opens in the near future of 2021, with the dramatic and inexplicable reappearance of the Twin Towers in the Badlands of South Dakota. The Towers are empty, though we soon learn there is one inhabitant, Jesse Garon Presley, the stillborn twin of Elvis Presley, who awakes as an adult on the top floor of one of the buliding. In the America of the novel, it is Elvis who died at birth, his absence shaping the subsequent history of popular music.

The apparition of the Twin Towers is also one of sound. As people come to see, “some hear the music and some don’t”. For those who hear, there are different songs. Meanwhile, all over the US, music begins disappearing. 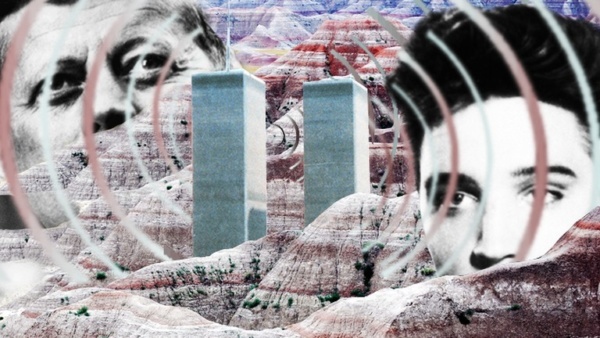 Music is a shadow narrative in the novel, signifying a desire for meaning that hovers at the edges of the textual narrative. This desire is symbolized a doppelganger of the novelist, who compulsively creates and recreates playlists, seeking the sequence that will give up a hidden meaning. His playlists pair selected songs, allowing them to work off each other in their musical and cultural registers. (The playlist is reproduced on Spotify.)

And so Ray Charles’s version of “That Lucky Old Sun” (1963) is paired with the Beach Boys’ song “The Warmth of the Sun” (1963), with the assassination of Kennedy a suggestive link. The Ray Charles song, a cover of a 1949 standard, became a hit after Kennedy’s death and was infused with the mourning of a nation. The Beach Boys song was first conceived and written in the days before and after the assassination, taking on a near-mythic stature as a result. Erickson asks about the Beach Boys song:

Who’s to say what epiphany explodes in the course of that bullet’s trajectory? Can the warmth of the sun, it won’t ever die only have been written before the gunshot, or only after? Is the song transformed […] simply by the moment with which it coincides?

These questions underline the ways in which music, memory, and myth combine, a process with which we are all familiar but rarely stop to analyse.

As the songs speak to each other, they condense the cultural histories of America into a shadow history of the present. Perhaps the most haunting doubling is the American folk song “Oh Shenandoah” with “O Superman” by the US artist Laurie Anderson. The former is a song with uncertain origins in the early 19th century, taken up by frontier traders and as a sea shanty, but also rumored to have been a black spiritual, the lyrics changing over time and use, narrating different American histories. The latter, first recorded in 1981, is an eight-minute performance of menace that would take on new meaning following 9/11, just as Ray Charles’ “Lucky Old Sun” did after the assassination of Kennedy). This is principally due to the lyrics, “Here come the planes/They’re American planes,” but also due to the intense sense of sonic dread that the song imparts.

The symbolic twinning of these songs is endowed with an epiphanic power and prophecy, and in Shadowbahn the history and future of America is poised between these equally haunting visions: the expansive, inclusive perspective of “Oh Shenandoah”, “from across the wide Missouri”, and the dread of imminent disaster expressed by “O Superman”. The tension between these visions remains unresolved in the novel – for Erickson, they represent dialectics of betrayal and redemption that define American national identity.

Dylan and Erickson are drawn to the idioms and conventions of the American romance, and in lesser creative hands, this could veer us into the kitsch territory of Americana.

However, they are not reanimating the long defunct American Dream. Rather they are exposing its dark underbelly, that which has to be disavowed to compel belief in the Dream. What lends depth and resonance to their romantic visions is their understanding of the darkness and dread, “that concentration of ecstasy and violence which is the dream life of the nation”.

While the soundtrack of the invisible republic revisits national trauma, this is not confined to the death of Kennedy. It references multiple violent divisions in the nation, and especially those involving racial difference.

When Dylan sings “Take me back to Tulsa to the scene of the crime” in “Murder Most Foul”, he is counterpointing what happened in Dallas in 1963 with another primal scene of national division: in 1921 a “race massacre” occurred in Tulsa, as an aspiring black community was attacked by white residents. (The recent TV series Watchman starts from the same traumatic scene and follows its own dark arc of alternative history into the present). Erickson may seek redemptive promise in “Oh Shenandoah” but he also recognizes its roots lie partly in white settler colonialism.

For all their weariness and wariness, Dylan and Erickson also valorize the communal power of popular music, its ability to connect an imagined community. When the music stops across America following the apparition of the Twin Towers in Shadowbahn, this signals a profound loss of history and of civic, democratic possibility. For his part, Dylan keeps the music going through his “never-ending tour”, with more than 3,000 shows since 1988.

The timing of the release of “Murder Most Foul” has generated much attention, with commentators suggesting this is a message timed to the pandemic crisis.

Maybe, but trying to read Dylan’s intent is less important than listening to the song as a dispatch from the invisible republic. It is both a balm and a beacon. Today, we need both.