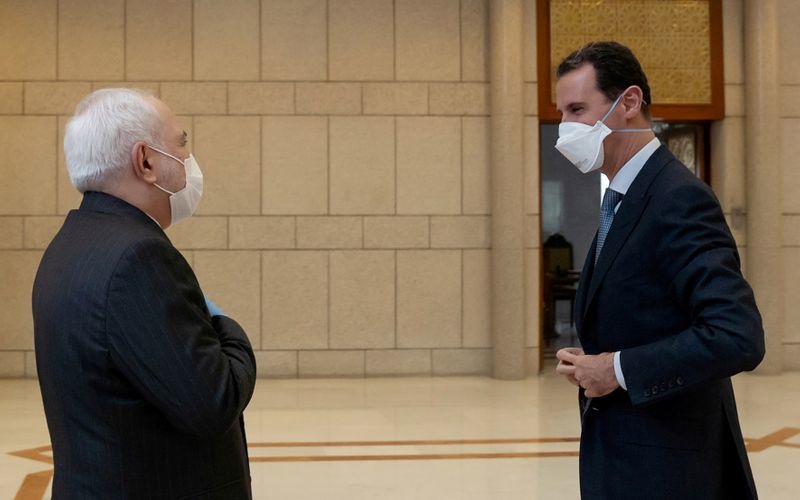 There were no public statements of significance on Monday about Syria’s nine-year conflict or about Iran’s essential military, economic, and political support for the Assad regime.

Instead, Assad used the encounter and Coronavirus to blast the US and other countries: “The Coronavirus crisis has exposed the failure of the Western regimes as well as their immorality, because the pandemic showed that these regimes only serve a select few of individuals with vested interests, instead of serving their people.”

Zarif put out Tehran’s standard denunciation of comprehensive US sanctions, imposed by the Trump Administration on the Islamic Republic in November 2018, “The true intentions of the US with regard to its refusal to lift cruel sanctions on nations under the difficult situation of fighting against this disease has been revealed.”

The Assad regime is in further trouble with Coronavirus’s effect on an economy which has lost 75% of its GDP since the Syrian uprising began in March 2011.

Damascus has only acknowledged 39 cases and three deaths, but curfews have been imposed and many businesses closed. There are widespread shortages of goods, electricity, and cooking gas. Prices are soaring, and the Syrian currency has fallen 96% in value since 2011 and halved since last summer.

Iran has supported the regime with billions of dollars in lines of credit, including for oil supplies. However, Tehran is also in serious economic difficulties, compounded by the virus which has officially killed more than 5,100 Iranians.

The Assad regime has also been frustrated in its vow to regain “every inch” of Syria. A Russian-regime offensive to seize opposition territory in the northwest has been checked by a March agreement between Moscow and Ankara on a ceasefire and effective partition of Idlib Province.

The offensive had reoccupied almost all of northern Hama and parts of southern and eastern Idlib; however, the presence of Turkey’s troops and Russia’s acceptance has rendered the regime powerless to advance farther.

Assad blustered on Monday, “Turkey’s acts of aggression expose its true intentions as it has failed to remain committed to the agreements it entered…all of which call for recognition of Syria’s sovereignty and territorial integrity.”

The two men made no reference to northeast Syria, much of which is under Kurdish control.

A Kurdish administration covers the Kobani and Cezire cantons after the US-supported, Kurdish-led Syrian Democratic Forces pushed the Islamic State out of the area.

In October 2019, Turkish forces crossed the border to take a corridor extending east of the Euphrates River to the Iraq border.