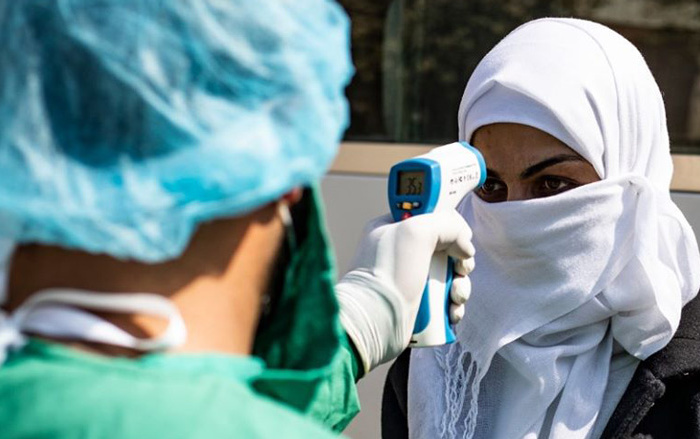 A healthcare worker checks the temperature of a woman arriving in Syrian Kurdistan (Rojava) from Iraqi Kurdistan, February 26, 2020 (Delil Souleiman/AFP)

The Kurdish administration in northeast Syria has reported the first confirmed case of Coronavirus.

Samples were sent on March 29 for testing by the World Health Organisation in Damascus. The positive result was confirmed on April 2, but the administration said it was not told of the results.

A WHO spokesperson said the Assad regime’s Health Ministry reported the case on April 2. He did not clarify if it is one of the 38 case, with two deaths, that the regime has acknowledged.

Inas Hamam added, “Contact tracing of the patient’s close contacts was conducted, and all were reported negative. However, another family member is currently reportedly also in hospital with symptoms of COVID-19 with test results pending.”

Claiming the lack of information was “dangerous”, the administration said, “The international organisation [WHO] knows well that the Syrian authorities do not cooperate with the autonomous administration.”

An official at the Qamishli National Hospital, under the control of the regime, denied earlier on Friday that there were any Coronavirus cases. Regime media did not report the death.

The Kurdish administration has imposed quarantine measures, including in displacement camps and prisons with thousands of suspected Islamic State members and their families.

Earlier this week, the Kurdistan Region of Iraq delivered two testing machines. The WHO airlifted a 20-ton medical shipment to Qamishli.

However, the co-chair of the Syrian administration’s health board said stocks of ventilators and personal protective equipment are inadequate. Almost all Coronavirus tests are carried out at the single central laboratory in Damascus.

Rojava, consisting of the Kurdish cantons of Kobani and Cezire, has effectively been a Kurdish autonomous area since 2017. The US-supported, Kurdish-led Syrian Democratic Forces pushed back the Islamic State, capturing the last ISIS-held village in March 2019.

The Assad regime refuses to acknowledge Kurdish autonomy. It retains oversight of some public services in the territory, paying the salaries of officials and staff.