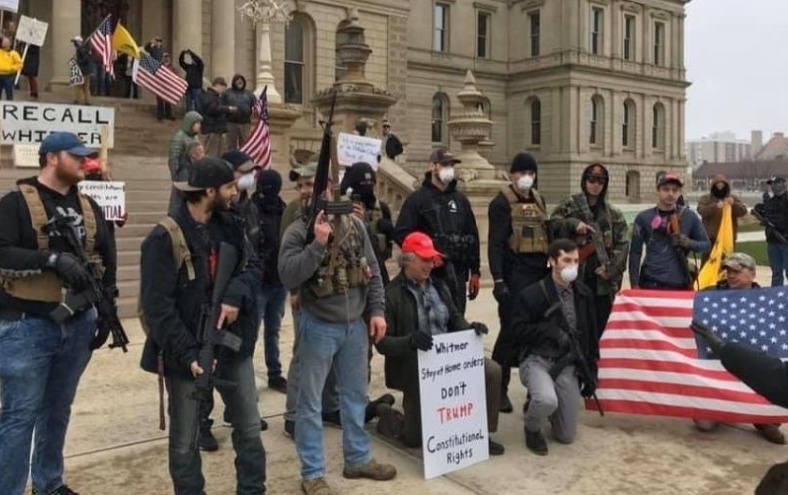 A man protests in Michigan against Coronavirus stay-at-home order, April 2020

Donald Trump supports illegal, armed protests against State stay-at-home orders to limit the spread of Coronavirus in the US.

Amid hours of Twitter ranting on Friday, Trump put out a series of all-caps messages demanding action in Michigan, Minnesota, and Virginia. He punctuated the latter with rejection of gun control.

LIBERATE VIRGINIA, and save your great 2nd Amendment. It is under siege!

The Twitter blast capped five days of twists and turns by Trump as he has tried to dismantle social distancing, even as the US death toll has surged by 57% — from 23,628 to 37,079 — since Monday.

Seeking the “re-opening” of the US by May 1, Trump is trying to lift both his Administration’s social distancing guidelines, stay-at-home orders in 45 states, and partial restrictions in three others.

Knocked back by medical advisors, Constitutional lawyers, and the governors, Trump appeared to concede defeat on Thursday. He said the governors would determine when orders would be removed, as revised Administration guidelines said the rate of deaths must decline on 14 consecutive days before any easing was recommended.

But on Friday morning, Trump watched a Fox TV report about the protesters, some of them armed, who have gathered in Minnesota and other states. He then pushed out his tweets to “LIBERATE” Minnesota, Michigan, and Virginia, all of whom have Democratic Governors.

Earlier this week, more than 1,000 protesters organized by conservative groups blocked traffic on the streets around the State Capitol in Lansing, Michigan. Some carried far-right banners. They derided Gov. Gretchen Whitmer with Trump’s trademark chant, “Lock her up.”

Unsettled by praise of Whitmer during the crisis, Trump has frequently insulted her as the “woman from Michigan”.

Michigan has recorded 2,227 deaths, the third-highest total after New York and New Jersey. Dr. Deborah Birx, the White House Coronavirus Coordinator, has warned that the Detroit area could be the next epicenter of the pandemic if effective measures are not maintained to limit the spread.

A Whitmer spokesperson said on Friday, “Right now the governor is focused on saving lives and protecting Michigan families. As the governor has said, we’re not going to reopen Michigan’s economy via tweet.”

And Whitmer told ABC News, “All I ask is let’s not get overly political here. Let’s focus on the public health. It’s better to be six feet apart right now than six feet under.”

In the Minnesota capital St. Paul, the group “Liberate Minnesota” staged a protest with hundreds of people. Governor Tim Walz has already said that outdoor activities including boating and hiking can resume this weekend, and that golf courses, shooting ranges and bait shops can reopen.

Northam responded to Trump yesterday, “I do not have time to involve myself in Twitter wars.”

Trump had been asked at Thursday’s White House briefing if he would tell the protesters, including those carrying guns and far-right signs, to listen to local authorities.

He was evasive: “I think they’re listening. I think they listen to me. They seem to be protesters that like me and respect this opinion.”

Yesterday he defended the illegal gatherings, echoing his excuse of violence by far-right groups in Charlottesville, Virginia in 2017:

These are people expressing their views. I see where they are and I see the way they’re working. They seem to be very responsible people to me, but they’ve been treated a little bit rough.

See also VideoCast: Yes, Donald Trump’s a Racist — Where Are The Blues Brothers When You Need Them?

Governors offered their support to colleagues as they criticized Trump’s tweets.

Washington Gov. Jay Inslee, another Trump target during the crisis, issued a statement:

The President is fomenting domestic rebellion and spreading lies even while his own administration says the virus is real and is deadly, and that we have a long way to go before restrictions can be lifted.

Inslee noted, “His words are likely to cause COVID-19 infections to spike in places where social distancing is working.”

Republican Governors were careful to distance themselves from Trump. From Missouri to Mississippi, they implicitly rejected his May 1 “re-opening” by extending provisions for social distancing.

Texas Gov. Greg Abbott announced plans to ease restrictions on some retailers and hospitals but said, “We’ll be focusing on all strategies that may open up Texas while also keeping us protected from the expansion of Covid-19.”

Trump jabbed again at New York Gov. Andrew Cuomo, who has been hailed for his management as the State has suffered 17,131 deaths.

As Cuomo spoke of a toll “breathtaking in its pain and grief and tragedy”, Trump tweeted, “Spend more time ‘doing’ and less time ‘complaining’.”

Cuomo responded by noting Trump’s refusal to coordinate Federal action and to provide assistance to states: “If he’s sitting watching TV, maybe he should go to work….He’s doing nothing.”

He summarized that New York cannot fully reopen its economy without risking a resurgence of the virus: “We cannot do it without federal help….We don’t have a testing system that can do this volume or that can be ramped up to do this volume.”