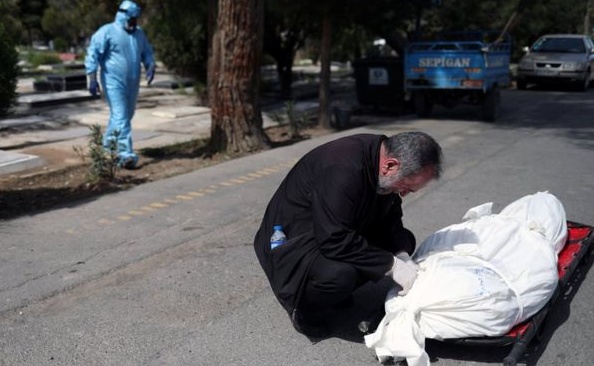 Iran’s regime reacted slowly to the deadly Coronavirus outbreak because of concerns over February’s Parliamentary elections and Tehran’s relationship with China, according to officials and doctors.

The regime’s denial of the crisis was evident from February 23, when the Supreme Leader claimed that fear was due to a “Western plot” seeking to depress turnout in the elections two days earlier. President Rouhani followed by denouncing a “foreign conspiracy” trying to undermine Iran.

Participation in the Parliamentary vote was 42.5%, the lowest in the Islamic Republic’s history.

In early March, the Supreme Leader acknowledged that the virus was real, and the Government began taking measures such as the closure of schools and public facilities, the suspension of Friday Prayers, and finally stay-at-home guidance for some workers.

But the regime continues to insist it acted promptly after announcement of the first cases on February 19. Rouhani said in a televised speech on March 18, “We spoke to people in a honest way. We had no delay.”

“Last Thing We Needed Was A Pandemic”

“%wo health ministry officials, a former ministry official, and three doctors” told Reuters how the regime delayed in February as the virus spread in and from its epicenter in the holy city of Qom.

They dated regime knowledge of the virus to early January. However, they said the priority, amid the Supreme Leader’s calls for a display of national unity, was the election turnout.

“The last thing we needed was a pandemic. The mood was already down,” said a “senior official”.

He and a Health Ministry official added that Iran did not want to disrupt ties with China, vital to support of Tehran’s troubled economy, by highlighting the virus’s origin in the city of Wuhan.

The virus reportedly entered Iran through a businessman returning to Qom from Wuhan.

In early March, Government spokesman Ali Rabaei said President Rouhani was alerted to reports on January 24 that Coronavirus was present in China and some neighboring countries, with the prospect of the return of Iranian tourists. He claimed that Rouhani ordered necessary measures on Janaury 26, although there was no announcement of the steps at that time or subsequently.

Rabaei claimed, “At that time, we did not know that the virus had entered Iran.”

“The Ministry Silenced Everyone”

But a nurse at Qom Hospital said that in late December and early January, the hospital had an increase in patients with respiratory problems.

Dozens of them died in a week,” the nurse said. “Our chief doctor informed senior officials at the health ministry. But we were told to give them medicine and release them.

A senior pulmonologist in Qom, working at a hospital designated for Coronavirus treatment, said large numbers of people with lung problems admitted almost every day, well ahead of the Government’s initial announcement on February 19.

“We did not know what it was. We thought it was influenza. But none of those medicines for influenza worked,” he said.

The Health Ministry official confirmed that by mid-January, senior officials in the ministry had received letters from doctors about the situation in Qom, and warnings from Mashhad and other cities.

“But the ministry silenced everyone,” he explained.

The Health Ministry raised the official death toll on Thursday to 3,160, among 50,468 confirmed cases. Almost 4,000 patients are in critical or serious condition.

Among the latest cases is Parliament Speaker Ali Larijani, who is now in quarantine.

Larijani, a representative for Qom, has served as Speaker since 2008 but did not stand in February’s elections.

Victims of the virus include two MPs, an advisor to Foreign Minister Mohammad Javad Zarif, Iran’s former Ambassador to the Vatican, a Revolutionary Guards commander, two members of the Expediency Council, which advises the Supreme Leader, and a member of the Assembly of Experts.

Two senior aides to the Supreme Leader, including his foreign policy specialist Ali Akbar Velayati; Vice President Masoumeh Ebtekar, two other Ministers, and five MPS are among the ill.