TrumpWatch, Day 1,774: Coronavirus — As Another 2,000 Die in US, Trump Threatens World Health Organization 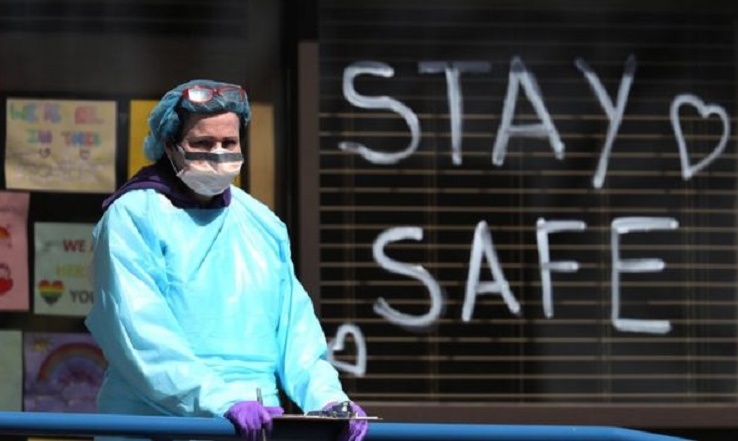 But trying to cover his mismanagement and to use blame of others for his re-election in November, Trump lashed out at the WHO.

He set up his attack with a tweet on Tuesday morning, amplifying blame of China by bringing in the international health organization.

The W.H.O. really blew it. For some reason, funded largely by the United States, yet very China centric. We will be giving that a good look. Fortunately I rejected their advice on keeping our borders open to China early on. Why did they give us such a faulty recommendation?

But 15 minutes later, he stepped back and denied the statement he had just made.

TRUMP: "Were going to put a hold on money spent to the WHO."

REPORTER: Is the time to freeze funding to the WHO during a pandemic?

REPORTER: Yes you did

TRUMP: "No, I didn't." pic.twitter.com/kTtJDktAAQ

The Trump Administration was already looking to halve its annual contribution to the WHO before the escalation of the Coronavirus crisis. It proposed the cuts in an early February budget proposal.

Trump’s animosity towards the WHO was fed by its criticism of the Administration’s ban on entry to the US by non-citizens coming from China. Public health experts feared at the time that such restrictions could lead to other countries under-reporting their cases of Coronavirus.

Yesterday Trump linked the animosity to his regular assertion of other countries and international organizations, such as NATO, “ripping off” the US.

The WHO, that’s the World Health Organization, receives vast amounts of money from the United States, and we pay for a majority or biggest portion of their money. And they actually criticized and disagreed with my travel ban at the time I did it, and they were wrong. They’ve been wrong about a lot of things.

He then built on the claims of some Republican legislators and his favored outlet Fox TV to link the WHO and Beijing: “They seemed to be very China centric, and we have to look into that.”

WHO leaders have been criticized by analysts for their reluctance to criticize China and question Beijing’s reporting of the crisis. However, that reluctance has been part of a pattern in which the organization — from Iran to the US to Syria — has refraining from challenges to national administrations, for fear of jeopardizing co-operation in the Coronavirus fight.

Trump offered no specific example of the WHO’s malfeasance to justify the funding freeze, saying only, “They really called, I would say, every aspect wrong.”

Instead, observers noted that Trump might be in need of finding another scapegoat. He had been attacking State Governors for weeks, but state and local leaders — including Trump’s targets such as New York’s Andrew Cuomo and Michigan’s Gretchen Whitmer — have been widely praised for their handling of the crisis.

Meanwhile, the Administration has been exposed in its playing of politics, withholding essential medical supplies to states with leaders disliked by Trump. Amid revelations that the Strategic National Stockpile is almost empty, Jared Kushner, Trump’s son-in-law, was rebuked last week for chiding Governors over their requests from “our” stockpile.

The exposure of Trump’s mismanagement of the crisis has been bolstered in the past 72 hours by detailed revelations of how he delayed the Administration from responding for more than two weeks.

On Tuesday, he faced the report that his trade advisor Peter Navarro had warned in two memoranda in late January and early February of up to 500,000 US deaths if action was not taken.

A journalist at the briefing read out Trump’s declaration that “within a couple of days, the cases will be down to zero”.

Trump denied that he saw Navarro’s memos, even though one was directly addressed to him.

He insisted, “Well, the cases really didn’t build up for a while,” and then gave a telling insight into his approach which belittled the crisis: “I’m a cheerleader for this country. I don’t want to create havoc and shock and everything else.”

REPORTER: You said in February that within a couple days coronavirus cases would be down to zero.

TRUMP: Well, the cases really didn't build up for a while. pic.twitter.com/ZuC4GVZKj7

In other moments from the briefing and from a Tuesday night appearance with his friend Sean Hannity on Fox TV, Trump:

*Repeated his promotion of the untested drug hydroxylchloroquine

Pres Trump: @NYGovCuomo was wrong about ventilators for NY.

"It's turning out I'm right because they wanted 40K ventilators," he said. "40K. They're not going to need anywhere near that & we said that & now they have plenty & if they need some more we can bring them some more."

“Mail ballots are corrupt, in my opinion,” Trump said, on the day that a court order mandated Wisconsin’s conduct of its primaries through in-person voting at polling stations.

When reporters pointed out that Trump voted by absentee ballot in Florida’s 2018 elections, he responded:

Sure, I can vote by mail. Because I’m allowed to. That’s called out of state. You know why I voted? Because I happened to be in the White House and I won’t be able to go to Florida to vote.