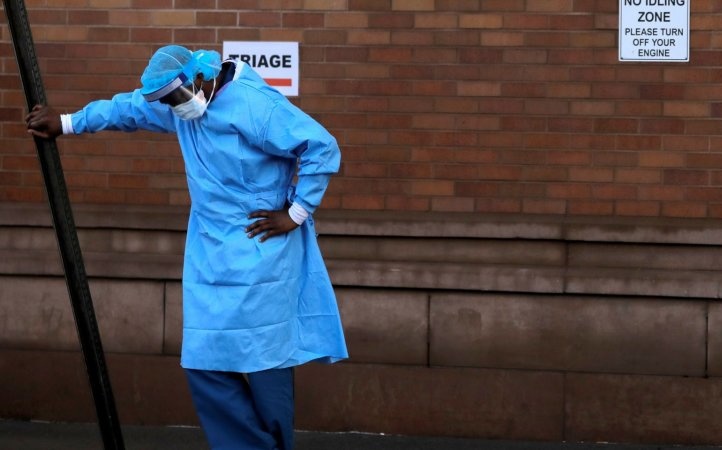 In an interview with BBC Radio Kent this morning, I separated fact from politics in Donald Trump’s blame of the World Health Organization and China.

Let’s be honest here. Donald Trump is lying because the World Health Organization did not cover up the spread of coronavirus in China.

Donald Trump is trying to seize blame and embarrassed because he failed in his gambit for “total power”.

The Government’s top medical and public health advisors continue to pull back Donald Trump from lifting of social distancing guidelines by May 1.

Dr Anthony Fauci, the infectious diseases specialist, said on Tuesday: “We have to have something in place that is efficient and that we can rely on, and we’re not there yet.”

Speaking carefully in his rebuttal of Trump, Fauci said it is a “bit overly optimistic” to speak of re-opening the US: “I’ll guarantee you, once you start pulling back, there will be infections. It’s how you deal with the infections that’s going to count.”

On Sunday night, Trump retweeted a demand for Fauci’s firing, before stepping back in Monday’s White House briefing.

Robert Redfield, the head of the Centers for Disease Control and Prevention, echoed on Wednesday morning:

Redfield also pushed back Trump’s criticism of China on Tuesday, just before Trump cut off funds for the World Health Organization:

Some of the assessments that the Chinese made at that time, were obviously not accurate.

But you know, it’s a testament to them that within a short period of time, as you know, they identified a new Coronavirus, which they basically almost immediately shared online, and allowed us to develop the diagnostic test…that gave us eyes on this outbreak.

Direct payments of $1,200 to tens of millions of Americans may be delayed by several days because Donald Trump has insisted that his names is on the checks.

It will be the first time that a president’s name has appeared on checks from the Internal Revenue Service.

The payments are part of a $2.2 trillion stimulus package approved by Congress in late March.

Trump privately suggested, to Treasury Secretary Steven Mnuchin, that he formally sign the checks, according to three administration officials.

However, the President is not an authorized signer for Treasury disbursements. Instead, a civil servant does so to ensure that government payments are nonpartisan.

Trying to shift blame and headlines from his mismanagement of the Coronavirus crisis, Donald Trump cuts US funding to the World Health Organization, the international body coordinating measures to deal with the pandemic.

Embarrassed by his failure 24 hours earlier to claim “total power”, Trump attacked the WHO in a White House briefing on Tuesday.

The US contributes more than $400 million per year to the WHO’s $4.8 billion annual budget. The cutoff will be a significant blow as the organization conducts vaccine trials, distributes test kits, and advises governments around the world.

Richard Horton, the editor of the prominent medical journal The Lancet, wrote of “a crime against humanity….Every scientist, every health worker, every citizen must resist and rebel against this appalling betrayal of global solidarity.”

Patrice Harris, president of the American Medical Association, said, “Fighting a global pandemic requires international cooperation and reliance on science and data. Cutting funding to the WHO – rather than focusing on solutions – is a dangerous move at a precarious moment for the world.”

Halting funding to the World Health Organization “is a dangerous step in the wrong direction,” says Dr. @PatriceHarrisMD of the American Medical Association.https://t.co/v1ypgDKomV pic.twitter.com/ePAykPQUoL

Senior doctors around the world echoed the warning. Prof. Lawrence Gostin of Georgetown University, explained, “Without a WHO that’s empowered, there will be many, many more deaths, and not just as it marches through sub-Saharan Africa, which is next, but also here in the United States.” Dr Nahid Bhadelia of Boston University spoke of “an absolute disaster. WHO is a global technical partner, the platform through which sovereign countries share data/technology, our eyes on the global scope of this pandemic.”

But Trump was in no mood to listen to medical authorities, after he failed on Monday to take power from State Governors to end social distancing measures and “re-open” the US.

He falsely accused the WHO of “severely mismanaging and covering up the spread of the coronavirus”, pinning it to criticism of China for covering up the extent of the initial outbreak.

While Chinese authorities did try to limit news in early January, the WHO and Beijing’s officials notified the US Centers for Disease Control and Prevention on January 3 of cases in Wuhan, the epicenter. The WHO continued to advise American agencies about the outbreak.

But Trump refused to acknowledge any threat from the virus, saying on in late January, “We have it totally under control….We’re going to be pretty soon at only five people.” When he was told by Health Secretary Alex Azar of a possible pandemic, he said the official was being “alarmist”.

The outcome was a delay for more than two months of any significant Federal Government action, until social distancing guidelines were issued on March 16 — guidelines that Trump tried to remove within a week.

Trump’s claim on Tuesday that, assisted by the WHO, China was not “transparent” about the outbreak was in stark contrast to his endorsement of Beijing’s “transparency” in late January.

China has been working very hard to contain the Coronavirus. The United States greatly appreciates their efforts and transparency. It will all work out well. In particular, on behalf of the American People, I want to thank President Xi!

Trump berated the WHO for its supposed opposition to the Administration’s one notable action, a late January ban on entry into the US to non-citizens coming from China.

But while the organization said travel bans were “ineffective in most situations” in containing the virus, it said the measurees could buy countries time to “to initiate and implement effective preparedness measures”.

On Monday, CBS’s Paula Reid exposed Trump’s failure to use that time: “What did you do in February?”

Trump never answered directly, instead falsely saying there were “no cases in the whole United States” and then blowing up:

Your whole network, the way you cover it is fake, and most of you, and not all of you, but the people are wise to you. That’s why you have a lower approval rating than you’ve ever had before times probably three.

Once we have finally turned the page on this epidemic, there must be a time to look back fully to understand how such a disease emerged and spread its devastation so quickly across the globe, and how all those involved reacted to the crisis.

The lessons learned will be essential to effectively address similar challenges, as they may arise in the future. But now is not that time….It is also not the time to reduce the resources for the operations of the World Health Organization or any other humanitarian organization in the fight against the virus.

Trump began the blame-WHO ploy last week, as US deaths began rising by almost 2,000 a day.

Even before the crisis, the Administration had taken aim at the organization and other international health initiatives. The draft budget submitted to Congress in early February reduced the US contribution to the WHO by 50%.

But the need to carry out the threat was prompted by an alliance of White House medical and public health advisors and State governors against Trump’s attempt to usurp power.

With his priority on the stock market and re-election, Trump is seeking a removal of social distancing guidelines by May 1, having failed to lift them by Easter.

But the White House’s top infectious diseases advisor, Dr Anthony Fauci, warned of “an extraordinary risk of there being a rebound” in Coronavirus “if you just turn the switch on”. Fauci was also quoted in the lengthy New York Times report on Sunday of Trump’s mismanagement: “You could logically say if you started mitigation earlier, you could have saved lives.”

All but eight states have full stay-at-home orders; three others have partial restrictions. On Monday morning, two groups of Governors — six in and near New York State on the East and California, Oregon, and Washington on the West Coast — announced regional initiatives to coordinate any easing of the stay-at-home provisions.

Constitutional lawyers, including conservatives, quickly rejected Trump’s claim that “when somebody is the President of the United States, the authority is total”.

So Trump backed away on Tuesday, saying that governors will determine their own plans. He tried to cover the retreat by declaring that he will be “authorizing each individual governor of each individual state to implement a reopening and a very powerful reopening plan of their state”.

No Presidential authority is needed for State governors to implement measures.

Meanwhile, he continued to rail at journalists who asked about the issue:

President Trump to reporter: "If you keep talking, I'll leave and you can have it out with the rest of these people." pic.twitter.com/TCmfIQlVJG

And White House trade advisor Peter Navarro, who has claimed that he rather than Dr Fauci has the necessary scientific expertise for recommendations, tried to protect Trump over the attack on the WHO: “They failed to call this a pandemic long after others had rightfully done so. There is blood on their hands.”