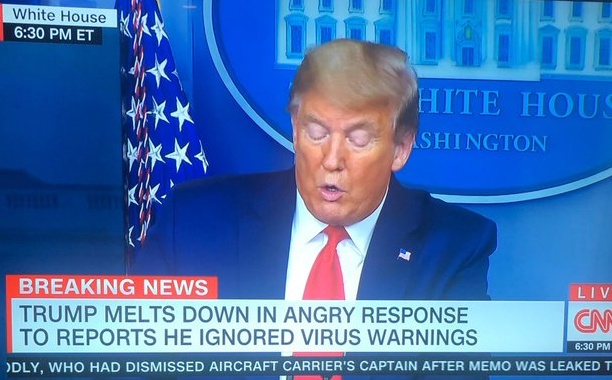 Angered by exposure of his denial and mismanagement of the Coronavirus crisis, Donald Trump falsely claims “total authority” over State governors and stay-at-home orders.

Trump held the first White House briefing in three days, after almost 36 hours of fuming over a lengthy New York Times exposé of an Administration wasting two months as Coronavirus spread across the US.

He had tweeted, “I am working hard to expose the corruption and dishonesty in the Lamestream Media.” He retweeted a demand from a Republican politician for the firing of Dr. Anthony Fauci, the White House expert on infectious diseases, because Fauci said, “You could logically say if you started mitigation earlier, you could have saved lives.”

But he opened by playing a campaign-style video and proclaiming, “Most importantly, we’re going to get back on to the reason we’re here, which is the success we’re having.”

Trump has been chafing at the social distancing guidelines belatedly announced by the Administration on March 16. Medical advisors and governors pushed him back from lifting the measures by Easter, and over the weekend they challenged his intention to “re-open” the US by May 1.

All but eight states have full stay-at-home orders, with three imposing partial restrictions. On Monday, nine governors from states on the East and West Coasts announced their intention to coordinate any gradual lifting of the measures.

So on Monday morning, Trump tweeted his false declaration that he could take control from the governors.

….It is the decision of the President, and for many good reasons. With that being said, the Administration and I are working closely with the Governors, and this will continue. A decision by me, in conjunction with the Governors and input from others, will be made shortly!

TRUMP, April 13: "When somebody is the President of the United States, the authority is total." pic.twitter.com/bIzVMb9rtE

A journalist asked at the briefing, “What provision in the Constitution gives the president the power to open or close state economies?”

Trump offered no specific reference but maintained, “Numerous provisions. We’ll give you a legal brief if you want.”

He implicitly chided the stay-at-home orders saying the State governors who have held out against them have done a “really done a very good job. They’re very much different from a New York or from other places where they’ve been hit very hard.”

When somebody is the president of the United States, the authority is total, and that’s the way it’s going to be.

Vice President Mike Pence covered Trump’s false claim of total power, “Make no mistake about it: In the long history of this country, the authority of the president of the United States during national emergencies is unquestionably plenary.”

TRUMP, April 13: "When somebody is the President of the United States, the authority is total." pic.twitter.com/bIzVMb9rtE

Governors, who have taken the lead in dealing with the crisis amid the lack of Federal Government coordination, took the initiative on Monday with announcements of multi-state planning.

The Democratic governors of New Jersey, Connecticut, Pennsylvania, Delaware and Rhode Island and Massachusetts’ Republican governor announced the formation of a regional working group on a reopening plan.

New York Governor Andrew Cuomo, in contrast to Trump’s sweeping declarations, spoke of the need for care in lifting restrictions:

Because if you do it wrong, it can backfire. We’ve seen that in other places on the globe.

Everyone is very anxious to get out of the house, get back to work, get the economy moving. Everyone agrees with that. What the art form is going to be here is doing that smartly and doing that productively, and doing that in a coordinated way, doing that in coordination with the other states that are in the area, and doing it as a cooperative effort, where we learn from each other.

Massachusetts Gov. Charlie Baker emphasized the need for a “ton of testing” to provide the necessary information for a safe resumption of business.

On the West Coast, California Gov. Gavin Newsom announced that he and the governors of Oregon and Washington will collaborate on their plan.

Meanwhile, Cuomo knocked back Trump’s claim of total authority: “We don’t have a king, we have an elected president.”

He said he would challenge the White House in court if Trump tries to reopen businesses without public health safeguards.

Trump Backs Off Punishment of Fauci — But Blows Up At Journalists

Trump did pull back from his implied threat of Fauci over the New York Times report and the doctor’s statement on Sunday that there could not be a re-opening of the US in the short-term: “If you just say, OK, it’s whatever, May 1, click, turn the switch on, obviously, if you do it in an all-or-none way, there’s an extraordinary risk of there being a rebound [of Coronavirus].”

Fauci took the podium to ease the controversy. He did not retract his comments, but in a carefully-convoluted statement, he said Trump has listened when advisors laid out steps for mitigation of the virus.

The doctor avoided the substance of the article, that Trump had blocked action throughout February and early March, and Trump gave a rambling, evasive answer.

CBS News’s Paula Reid finally intervened to note that Trump’s campaign-style video, lauding his supposed accomplishments, skipped over a month: “What did you do in February?”

Trump responded, “What do you do when you have no cases in the whole United States?” (In fact, as Reid noted, the first US cases were from late January.)

Pressed by Reid, “What did your administration do in February for the time that your travel ban [on entry from China of non-citizens] bought you?”, Trump exploded:

We did a lot. Look, look, you know you’re a fake. You know that. Your whole network, the way you cover it is fake, and most of you, and not all of you, but the people are wise to you. That’s why you have a lower approval rating than you’ve ever had before times probably three.

Late Monday, Trump retweeted a list from the “Trump War Room” of “what the Trump Administration was doing in February to combat the coronavirus”.

None of the entries were of substantial action.