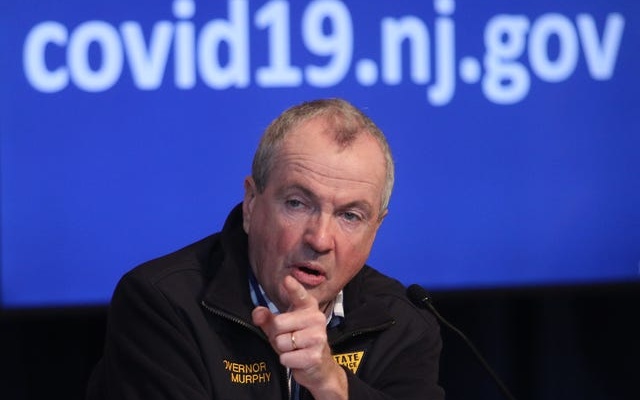 New Jersey Gov. Phil Murphy: “If we open up too early, we could be pouring gasoline on the fire” (Chris Pedota/The Record/AP)

The White House’s top medical advisors on Coronavirus and State governors push back Donald Trump’s desire to lift social distancing by May 1.

The advisors and governors were the featured guests on Sunday morning political talk shows, and they all put out the message that the mitigation effort had to be maintained to limit deaths, prevent the healthcare system from breaking, and ensure there is no resurgence of the virus.

Models show the toll can be limited to 60,000 by August if mitigation continues. However, if stay-at-home orders are lifted, the estimate is of 300,000 deaths.

Despite this, Donald Trump has put his priority on a stock market recovery and his re-election. He initially sought a lifting of social distancing guidelines by Easter, and is now pursuing the May 1 date.

Dr Anthony Fauci, the director of the National Institute of Allergy and Infectious Diseases, said a transition from social distancing could “probably start, at least in some ways, maybe next month”. However, he cautioned that Coronavirus could resurge later in the year.

He pushed back on Trump’s declaration that much of the US will quickly reopen.

It is not going to be a light switch. It is going to be depending where you are in the country, the nature of the outbreak you’ve already experienced, and the threat of an outbreak that you may not have experienced.

If you just say, OK, it’s whatever, May 1, click, turn the switch on, obviously, if you do it in an all-or-none way, there’s an extraordinary risk of there being a rebound.

Fauci bolstered his caution by implicitly chiding the Trump Administration over its failure to prepare for the pandemic.

In line with recent detailed report of the loss of more than two months because of Trump’s Coronavirus denial and mismanagement, the doctor carefully said, “You could logically say if you started mitigation earlier, you could have saved lives.”

Christopher Murray, director of the Institute for Health Metrics and Evaluation, said that removal of all restrictions next month would probably mean that “by July or August, we could be back in the same situation we are now”.

Murray, the creator of a model used by the White House experts, said, “Maybe some states can open up mid-May. But we have to be very careful and make sure that we don’t sort of lose all the effort that the American people have put into closures by premature opening.”

“Gasoline on the Fire”

Gov. Phil Murphy of New Jersey went further in the warning: “I fear, if we open up too early and we have not sufficiently made that health recovery and cracked the back of this virus, that we could be pouring gasoline on the fire, even inadvertently.”

Murphy emphasized that health care recovery must be assured before economic recovery: “It has to come in that sequencing.” He added a note about the strain on hospitals, accentuated by the lack of Federal Government action:

We’re fighting to stay ahead on bed capacity, ventilators that are constantly running thin, the medicine you need for those ventilators, the personal protective equipment, and the relief from the bullpen for our health care workers.

We’re going to make the decisions that safeguard New Mexicans. This is the problem with not having a national strategy. This virus is blind to state borders. If we had better national strategies and universal testing and software-based contact tracing, we could figure out when opening makes sense and we could start to do that in the country.

We’ve looked at recovery options, but we’re not going do anything until the peak occurs and we’re clear about not having hospitalizations and removing the number of people that are positive every day in our surveillance and testing efforts.

Fauci lent weight to the governors’ position: “I am deeply impressed by how much they about the balance, between saving the lives of citizens of their states and at the same time cautiously do this re-entry.”

Food and Drug Administration head Stephen Hahn also carefully pushed back against Trump: “[May 1] is a target. And obviously, we’re hopeful about that target. But I think it’s just too early to be able to tell that.”

Hahn emphasized, “The primary issue here is the safety and the welfare of the American people. That has to come first.”

The advisors and governors benefited from the space of no White House briefing — and thus no misinformation and undermining of their positions by Trump — for the second day in a row.

Instead, Trump spent the day ranting on Twitter about the lengthy New York Times article detailing the Administration’s mismanagement and inaction for more than two months.

He did not counter any of the information in the report, based in large part on e-mails from a discussion group including White House advisors and medical and public health experts.

He fumed, “I am working hard to expose the corruption and dishonesty in the Lamestream Media. That part is easy, the hard part is WHY?”

Officially, Trump cannot lift the stay-at-home orders, fully in place in 42 states and partially in three others. That power is with the governors.

However, his declarations could put political pressure on the State leaders to ease restrictions despite medical advices. And they bolster his allies who have balked at the orders.

Arkansas Gov. Asa Hutchinson, who has refused to implement any restriction, defended his position on Sunday by saying that Arkansans would not adhere to any order: “You’re not going to win simply by a lockdown, because there’s no such thing as a true lockdown where everybody stays at home and does not go out.”

He said there would be no citations for violation of social-distancing guidelines, for example at crowded church services on Easter.