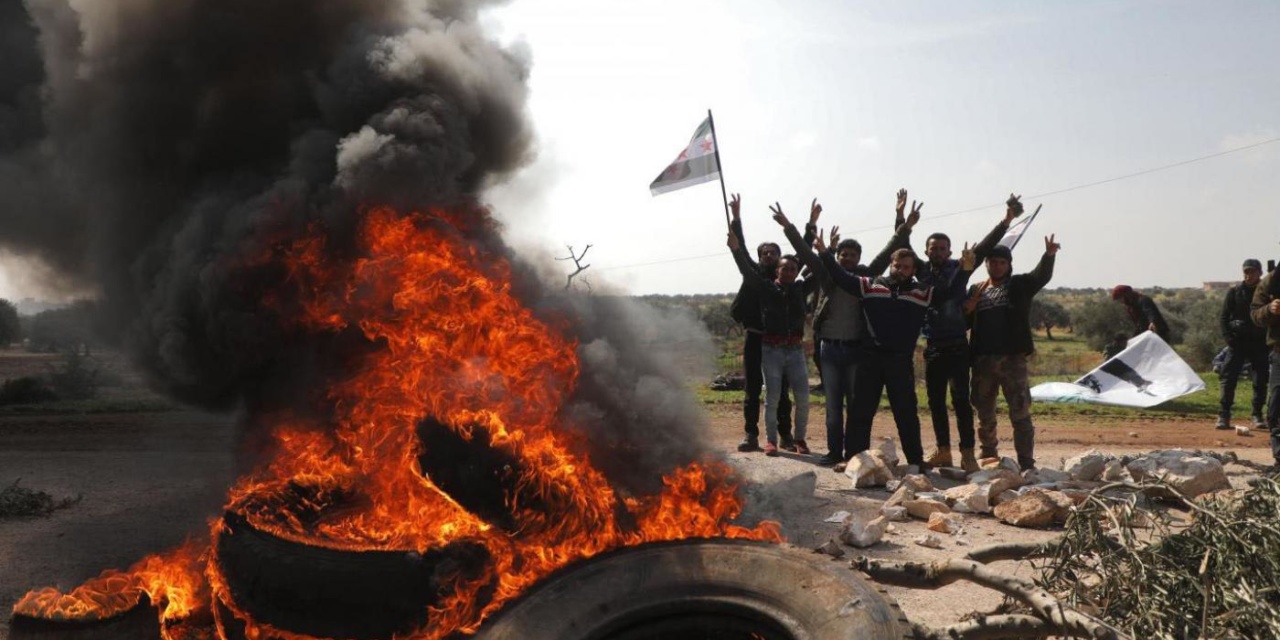 Demonstrators on the M4 highway in Idlib Province in northwest Syria, hoping to prevent Turkish and Russian patrols (AFP)

Protests by residents continue to block Turkey and Russia from carrying out military patrols in partitioned Idlib Province in northwest Syria.

The patrols are part of a March 5 agreement between Turkish President Recep Tayyip Erdoğan and Russian counterpart Vladimir Putin for a ceasefire after a 10-month Russian-regime offensive that seized part of the last major opposition area in the country.

From March 15, Ankara and Moscow were supposed to patrol in a 12-km (7.5-mile) corridor either side of the cross-Idlib M4 highway.

But two days before the first patrols, demonstrators gathered on the M4. They dug trenches and constructed earthen berms blocking the east-west route.

On Monday, the patrols only extended a few kilometers, inside regime-held territory, from Saraqeb — the key town at the junction of the M4 and Damascus-to-Aleppo M5 highways, occupied by pro-Assad forces three days before the Erdoğan-Putin meeting.

Bashar al-Assad met Russian Defense Minister Sergey Shoygu in Damascus, with Assad regime media putting out the template statement that the two men discussed the Russian-Turkish agreements and “the constant breaches of them by terrorist organization”.

The more than 3 million civilians in opposition-held Idlib are awaiting the delivery of the first kits to test for Coronavirus.

World Health Organization spokesman Hedinn Halldorsson said on Monday that 300 kits will reach the area, which includes more than 1 million people displaced by the Russian-regime offensive since last April, by Wednesday.

He said an additional 2,000 tests will be sent as soon as possible.

The WHO representative in Syria, Ni’ma Saeed Abid, initially said earlier this month that the organization could not dispatch kits to the northwest. However, under pressure from medics who warned of a virus outbreak in overcrowded, unsanitary camps, the WHO relented and said the kits would be sent.

On Sunday, the regime announced the first confirmed Coronavirus case in its areas.

Analysts and residents believe Assad’s officials have been covering up the outbreak of the virus for weeks. They note the vulnerability of Syria because of the thousands of people who have entered the country from Iran, one of the epicenters of the virus.

Those entering have including Iranian and Iranian-led fighters propping up regime forces.