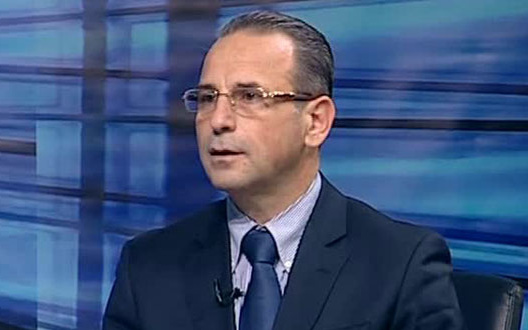 Syria’s Health Minister Nizar Yazigi: “We purified the country of many germs”

The Assad regime’s Health Minister has compared steps against Coronavirus to the regime’s mass killings in Syria’s nine-year conflict.

Nizar Yazigi made the statement in an interview with State TV.

Genocidal language by the Syrian health minister on Ikhbariya state TV. "The Syrian Arab Army purified Syria of many germs… There are no cases of the Corona Virus in Syria until now." pic.twitter.com/Zdxt17dF3W

The regime has killed hundreds of thousands of civilians in a conflict which has displaced more than 11 million — about half of Syria’s population.

Tens of thousands have been executed, tortured to death, or died from inhumane conditions in regime prisons.

Yazigi and the regime continue to deny that Syria has any cases of Coronavirus.

But on Friday, ministers approved the closing of schools, universities, and institutes from today. All cultural, sporting, and scientific events with crowds are suspended.

Work hours in the public sector are being reduced 40%, and businesses ordered to operate with the minimum of staff for 15 days.

Medical staff, aid workers, and activists fear that Coronavirus is already spreading in Syria. They cite the fragmentation of the country’s services, poor conditions in camps for displaced persons, and unrestricted travel from Iran — one of the epicenters of the outbreak — including for Iranian troops and Iranian-backed foreign militias.

A Damascus resident summarized, “There is no way on earth Syria is immune from a globally spread virus. The government lives in denial; it’s bullshit.”

A World Health Organization official said by e-mail, to an EA correspondent, that 1,200 tests have been given to the central public health lab and that technicians have been trained on detection of the virus.

He insisted 1,200 tests were sufficient for the country, considering “regular replenishment” by the WHO. However, he admitted that the organization can do nothing in northwest Syria, where more than 1 million civilians have been displaced since last April by a Russian-regime offensive.

The official wrote on Friday that the WHO has to rely on the regime’s Health Ministry for reports of any cases, although it will then verify them.

He said of the possible spread from Iran, “I know that Iranians put restriction on their nationals to travel abroad and limited it to that absolutely necessary. Anyhow member states do have their own considerations which are not necessarily consistent with WHO travel advisories.”