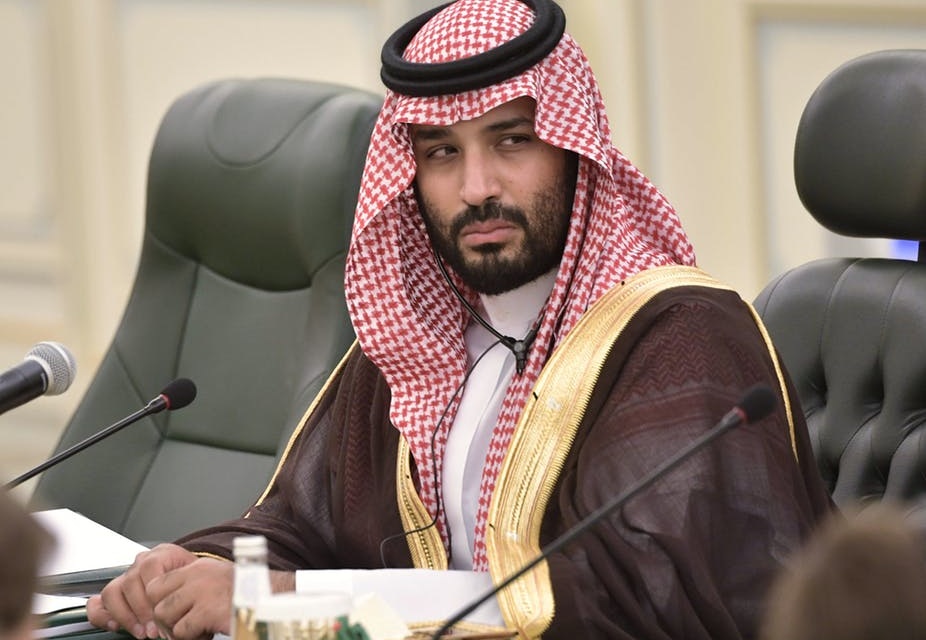 “Mohammad bin Salman does not believe in a fight for another day — instead, the spark should be extinguished before it becomes a fire”

Co-written with Scott Lucas and originally published by The Conversation:

The news seeped out of Saudi Arabia into international outlets last Friday night.

With silence from Saudi official and private media, rumors flew about King Salman’s health and an impending succession. The Saudi Government finally ended some of this chatter on social media and news outlets with images of the King meeting the new Saudi Ambassadors to Uruguay and Ukraine, while Interior Minister Prince Abdul Aziz bin Saud and his father Prince Saud bin Nayef, the Governor of Eastern Province, and other royals were shown doing their jobs rather than plotting a coup.

But the questions remain: why did Crown Prince Mohammed bin Salman, who has emerged as the most powerful man in the Kingdom after his father after sidelining a plethora of senior members of the Royal family and aspirants for power, make his move now with the arrest of potential rivals on the most serious charges possible? And where does his father, the king, stand in this royal power play?

Mohammed bin Nayef was Crown Prince until he was replaced by Mohammad bin Salman in June 2017. He was reportedly put under house arrest, but he was later allowed to travel within the Kingdom, participating in Royal Family events and often flanked by his two younger half-brothers.

Prince Ahmad was Deputy Interior Minister for more than 30 years, under his brother Prince Nayef, and then the Interior Minister until he was replaced in Mohammed bin Nayef in November 2012. But it was in late 2018 that he rose to controversial prominence, as — speaking outside his London home to protesters against the Yemen war — he assigned the responsibility of the military intervention to the Saudi King and his crown prince.

Reports also suggested that in 2017, in the Allegiance Council, Ahmad had declined to support Mohammed bin Salman’s appointment as Crown Province. Combined with the position of Mohammed bin Nayef, that meant two senior members of the Royal Family — both with long-time power in the Interior Ministry — had not given their baya, the oath to allegiance to the newly-appointed Crown Prince, positioning themselves as potential opponents to his rule.

Since the time of King Faisal, power within the Kingdom has always remained distributed within King and a plethora of his senior half-brothers – and decision-making has been a rather consensual affair. The king was considered primus inter pares among his brothers and half-brothers

But as this generation of Saudi royalty gradually died out from 2010 to 2015, a vacuum of power could be foreseen. And so could the new generation, embodied in the 30-something Mohammed bin Salman.

When King Salman took the throne in January 2015, he immediately turned the horizontal, decentralized system into a vertical one. Mohammed bin Salman, a young son of the king, was named as Defense Minister. Two months, he and the King took the gamble of Saudi Arabia’s intervention in the Yemen Civil War.

King Salman then became the first Saudi monarch to replace not one but two of his Crown Princes, and subsequently ended the institutional fiefdom culture where a senior prince, his extended family, and his patronage networks controlled a government body.

Mohammad bin Nayef was displaced from his Interior Ministry power base. The institution was de-fanged by removing counter-terrorism and domestic intelligence from its purview and putting them under a new body, General State Security, directly reporting to the King.

Meanwhile, his brother Prince Saud Bin Nayef was accommodated with an appointment as Governor of Eastern Province, and his nephew Prince Abdul Aziz Bin Saud – a third generation royal- replaced him at the Interior Ministry. An attempt was made to dilute Prince Ahmad’s potential rivalry by naming his son Sultan Bin Ahmad as Ambassador to Bahrain.

Meanwhile, Mohammed bin Salman now promoted to the rank of crown prince, displayed and enforced the new vertical authority of King and Crown Prince, with the detention of other Saudi princes and billionaires in November 2017 in the Ritz Carlton Hotel in Riyadh. Release came only after loyalty was assured and fortunes were confiscated.

But why up the ante with the detentions of Ahmad and Mohammad bin Nayef, since they were already rendered powerless?

The answer is not one-way. Mohammad bin Salman may have wanted to “twist an ear”, setting an example for other potential critics in the family, but the King’s brother gave him the pretext to do so.

In his Majlis meetings, Prince Ahmad reportedly derided royal decisions, such as the closing of the Grand Mosque in Mecca in the effort to contain Coronavirus. Others who were detained were present in the meetings, which appeared to have been monitored by the Royal Court.

Mohammed bin Salman took the matter to his father, known as the family’s chief prefect since his days as Governor of Riyadh. The King endorsed the act of discipline, offering no space for other princes to try and divide him from his son. The arrests of younger family members, alongside their patrons, reinforced the warning that anyone linked to the dissenters face the end of their careers.

With this decision set in regal stone, there is no way back. Mohammed bin Salman has shown that he will not tolerate even a whiff of dissent from within the Family. While the old system of power distribution is shattered, its remnants and those contemplating their reconstruction cannot be tolerated.

The Crown Prince and the King have put in place other safeguards in this power play by garnering the support of other senior royals, notably by appointing their children — some of them among MBS’s “new generation” — to positions of power. The carrot and the stick are both being waved in Riyadh for all to see.

That does not mean Mohammed bin Salman has vanquished all challenges. Far from it.

The Crown Prince was already taking a political and economic gamble, one of the biggest in Saudi history, with the Vision 2030 program to diversify the economy and promote Riyadh as a global power. He has faced animosity from Western quarters over the murder of journalist Jamal Khashoggi and for the quagmire of Yemen war.

As if the political currents were not strong enough, the economy is giving new headaches to the Crown Prince. The effects of Coronavirus effect and a global economic downturn have sent oil prices into free fall. With Russia declining a Saudi offer for production cuts to stabilize the situation, the petro-giants are locked in an all-out price war to get the most out of market shares. Riyadh’s response has pushed back Moscow, but it will not give relief to the Kingdom, already facing a budgetary deficit nearing $50 billion for this fiscal year.

Maybe the arrests could have been delayed amid these fast-moving challenges. But MBS has a habit of opening new battle fronts while previous ones are still active. He does not believe in a fight for another day — instead, the spark should be extinguished before it becomes a fire.

There is no doubt now about his absolute grip on power. And it is a grip that the King is reinforcing.

Whether, beyond the short term, they will hold that grip is another matter.