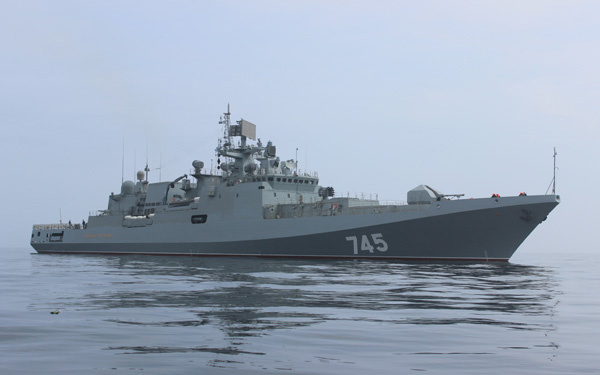 While Syria faces the threat of coronavirus, Russia — the essential backer of the Assad regime — preferred to display its naval force on Friday.

Russian State media proclaimed the might of frigates holding drills in the eastern Mediterranean, including anti-submarine warfare and air defense drills.

The Russian Navy has been largely peripheral during Syria’s nine-year conflict, even after Moscow’s military escalation in September 2015 to keep Bashar al-Assad in power.

However, on occasion the warships have lobbed the Kalibr missiles in opposition territory as Russia carried out air and ground attacks to decimate northwest Syria. And Moscow has upheld the presence as a counter to US power in the Mediterranean.

The effort has occasionally backfired, showing the weakness of an aging fleet. The aircraft carrier Admiral Kuznetsov has been mocked for belching smoke and ensuring that a tug is nearby in case it breaks down. Two warplanes crashed while trying to land on the ship’s deck.

But the Navy emphasized in Friday’s press release that one of the three frigates, the Admiral Grigorovich, was part of a new series of frigates “designed to destroy enemy surface ships and vessels, submarines, and ground installations; carry out patrols; and defend sea lanes”.

The Assad regime added restriction of travel between provinces to its Coronavirus measures on Friday.

The ban will take effect at 2 p.m. on Sunday.

Regime media emphasized disinfection campaigns and a 6 pm-6 am curfew that was announced on Wednesday, with photos of empty streets.

The regime has acknowledged only five cases of Coronavirus. However, schools, universities, and institutes are closed; bakeries are shut; and public transport banned.

No cases have been confirmed yet in opposition-held northwest Syria. However, medics, activists, and residents are warning of a devastating outbreak.

More than half of medical facilities have been damaged or destroyed by Russian-regime attacks, which have displaced more than 1 million people into overcrowded camps with poor sanitation and little or no water.