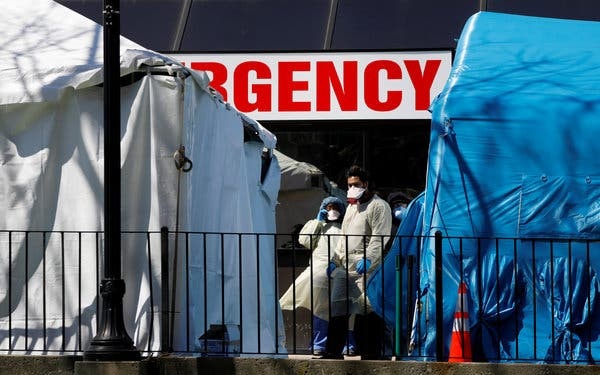 Trying to cover his inaction over Coronavirus, Donald Trump shouts about US governors and General Motors as the number of confirmed cases passes 100,000.

Shredding Trump’s attempt to lift social distancing guidelines by Easter, April 12, the US toll rose even more sharply on Friday. Deaths rose to at least 1,588 from 1,195 in the highest daily increase so far. Confirmed cases reached at least 101,242, compared to just under 86,000 the previous day.

With New York City and State already at risk of being overwhelmed, Chicago, Detroit, and New Orleans faced a rapid increase of cases and shortages of vital medical equipment and supplies. Mayors of 213 cities said in a survey that they do not any way of acquiring personal protective equipment for medics, masks, and ventilators.

Tom Cochran, the chief executive of the United States Conference of Mayors, said, “It is abundantly clear that the shortage of essential items such as face masks, test kits, personal protective equipment, ventilators and other items needed by health and safety personnel has reached crisis proportions in cities across the country.”

Trump had refused to use the Defense Production Act for manufacture and supply of ventilators, needed to provide life-saving oxygen to Coronavirus patients. He declared that the private sector would ensure the required amount was delivered, and said it was up to State Governors to make acquisitions.

But on Friday, he invoked the Act, ordering General Motors for manufacture the equipment after supposedly collapsing a deal with the Government.

General Motors MUST immediately open their stupidly abandoned Lordstown plant in Ohio, or some other plant, and START MAKING VENTILATORS, NOW!!!!!! FORD, GET GOING ON VENTILATORS, FAST!!!!!! @GeneralMotors @Ford

On Wednesday, the White House suddenly withdrew its planned announcement of a joint venture between General Motors and Ventec Life Systems for 80,000 ventilators. The postponement came when the Federal Emergency Management Agency said it needed more time to assess if the $1 billion cost is prohibitive.

Administration officials said an initial promise by the two companies that the joint venture could quickly turn out 20,000 ventilators had contracted to 7,500, with even that number in doubt. General Motors and Ventec said the project, with the retooling of a GM plant in Michigan, was proceeding.

GM repeated on Friday that, contrary to Trump’s claims, manufacture of ventilators was underway.

In the White House briefing on Thursday, Trump questioned if the ventilators were required, aiming at New York Governor Andrew Cuomo’s assessment of an urgent need for 30,000 units.

But State and local officials like Cuomo, who have taken the lead in the absence of Administration action, pleaded for assistance as hospitals faced a breakdown in care.

As late as Thursday, Trump belittled the pleas: “A lot of equipment is being asked for that I don’t think they will need….Some of these governors, you know, they take, take, take, and then they complain. You build them a hospital, and then they’re always complaining.”

Trump took special aim at Governors Jay Inslee of Washington and Gretchen Whitmer of Michigan, both of whom have been praised for their response to outbreaks in their states. He said he had ordered Vice President Mike Pence not to communicate with the pair: “If they don’t treat you right, I don’t call.”

Having failed to intimidate Whitmer on Thursday, he tried again yesterday, referring to her as “the woman in Michigan” in the White House briefing and tweeting:

I love Michigan, one of the reasons we are doing such a GREAT job for them during this horrible Pandemic. Yet your Governor, Gretchen “Half” Whitmer is way in over her head, she doesn’t have a clue. Likes blaming everyone for her own ineptitude! #MAGA

Inslee responded to the tirade, “I’m not going to let personal attacks from the president distract me from what matters: beating this virus and keeping Washingtonians healthy.”

Trump appointed White House trade advisor Peter Navarro, best known for his protectionism and criticism of China, to coordinate use of the Defense Production Act. Trump, having questioned the need for ventilators 24 hours earlier, said, “We will either make or get, in some form, over 100,000 additional units” — more than three times the annual US supply — over the next 100 days.

“We’re going to have plenty,” he asserted.

The House confirmed the measure by voice vote, less than two days after the Senate unanimously passed it.

The measures include a a $500 billion government lending program for distressed companies; Government power to take equity stakes in airlines who receive aid; $377 billion in loans to small businesses; direct payments of $1,200 to millions of Americans; expanded aid to the unemployed, including freelancers and gig workers; and $130 million for hospitals.