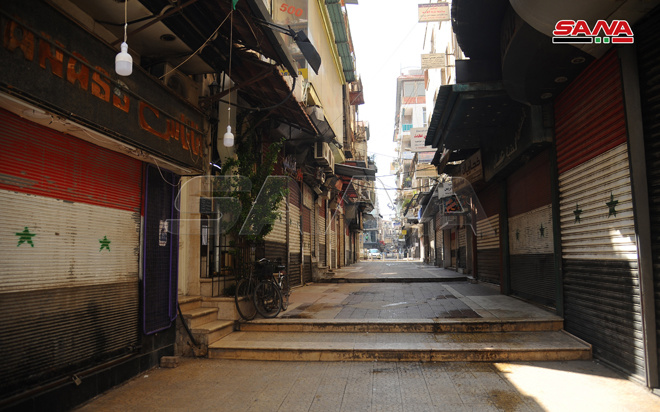 An empty street and shuttered shops in Damascus, Syria, March 2020

Residents of Syria’s capital Damascus — after nine years of conflict, spiraling prices, and a collapsing economy — face further shortages and woes because of Coronavirus.

Ammar Hamou of Syria Direct reports on the dire situation, with people in the capital speaking out despite regime restrictions. “Samer al-Ali” said:

This economic standstill we are living in, which is worse than anything we’ve had before, forces us to choose between isolation to protect ourselves from Corona and going out in search of our daily sustenance.

Despite reclaiming territory — thanks to essential Russian, Iranian, and Hezbollah support — the Assad regime has sunk Syria’s GDP by 75%. More than 80% of Syrians live below the poverty, according to UNICEF.

Rampant inflation has made home ownership and even rent unaffordable for many Damascences, and shortages have led to blackouts and long queues for basics such as cooking gas.

For weeks, the regime denied any Coronavirus in Syria, drawing skepticism from residents — Ali says, “The regime hides the cases and doesn’t disclose them.”

But since Sunday, the Health Ministry has acknowledged five cases, and Bashar al-Assad and his Ministers have issued a series of orders.

Schools, universities, and institutes are closed. Bakeries are shut, and public transport banned. On Wednesday, a 6 pm to 6 am curfew was imposed.

“Clinging to life is a human priority, an innate characteristic. The people of the capital are trying to confront the epidemic by following safety procedures as closely as possible,” said a resident.

But a researcher says there are shortages of “masks, alcohol, and disinfectants”, unaffordable to “large segments of the population”.

Ali points to the struggle for subsistence for many. He says that they “can’t afford a bundle of bread, despite it still being cheap [600 Syrian Lira or $0.49]”, and talks about the photographs he takes for Lens of a Young Damascene:

These pictures and worse, everywhere I turn; widespread deprivation. Those who are helpless, live on the minimum, forgetting about things like fruit and meat. All that matters to them is ensuring the most essential needs….

You have to stand for hours in long lines to get the subsidized goods [such as sugar, rice, and tea], and maybe you won’t get them.