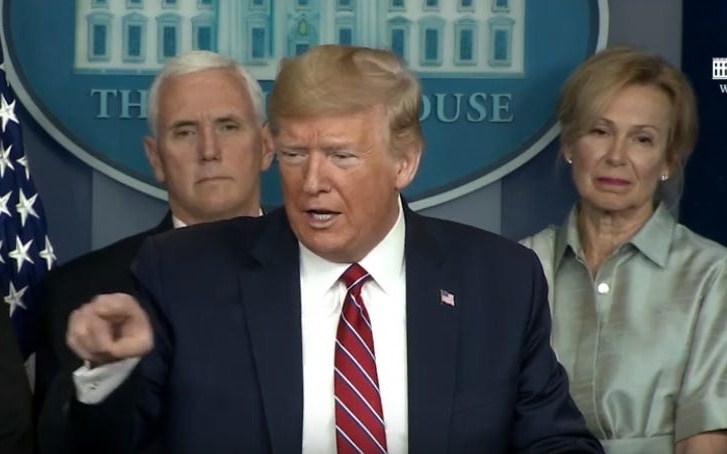 Dismissing reports of Coronavirus as a “hoax”, Donald Trump ignored warnings from US intelligence agencies throughout January and February.

“US officials familiar with spy agency reporting” told The Washington Post that the intelligence tracked the spread of the virus in China.

Health and Human Services Secretary Alex Azar said on Friday that officials were notified of Coronavirus by discussions between the director of the Centers for Disease Control and Prevention and Chinese colleagues on January 3.

By early February, a majority of US intelligence in daily briefing papers and digests were about the virus, officials said.

State Department personnel were discussing the issue by the third week of January, as US diplomats were brought home from Wuhan, China, the initial center of the outbreak.

One intelligence official explained, “Donald Trump may not have been expecting this, but a lot of other people in the government were — they just couldn’t get him to do anything about it. The system was blinking red.”

Health Secretary Azar was unable to speak with Trump until January 18. And when he did make phone contact, Trump shifted the discussion to vaping and when flavored vaping products would be back on the market.

Acting White House Chief of Staff Mick Mulvaney and aides met to discuss how to get Trump to take the issue seriously. But Trump persisted in his belief that the virus had not spread through the US.

By early February, White House officials warned of a shortage of tests to determine the rate of infection. But throughout the month, Trump responded with public declarations such as “it’s going to work out fine” and “we’re going to be pretty soon at only five people”.

Trump’s Friday briefing was marked by his complaint — in a response to an invitation to reassure scared Americans — about the “nasty question” from a “terrible reporter”.

The outburst followed Trump’s promotion of the drug chloroquine, which he falsely said on Thursday had been approved by the Food and Drug Administration for treatment of Coronavirus.

.@PeterAlexander: "What do you say to Americans right now who are watching and who are scared?"@VP Pence: "I would say do not be afraid. Be vigilant." pic.twitter.com/8jJVSJbZNJ

But Secretary of State Mike Pompeo continued to cover for Trump:

After Pompeo asks Americans to rely only on trusted sources of information, @colvinj asks him: "Does it undermine you at all when the president stands up here and he attacks news outlets, calling us untrustworthy?"

Pompeo: “Somebody else have a question?"

Meanwhile, the White House denied that Trump had ignored intelligence throughout the crisis.

President Trump has taken historic, aggressive measures to protect the health, wealth and safety of the American people — and did so, while the media and Democrats chose to only focus on the stupid politics of a sham illegitimate impeachment.

It’s more than disgusting, despicable and disgraceful for cowardly unnamed sources to attempt to rewrite history — it’s a clear threat to this great country.