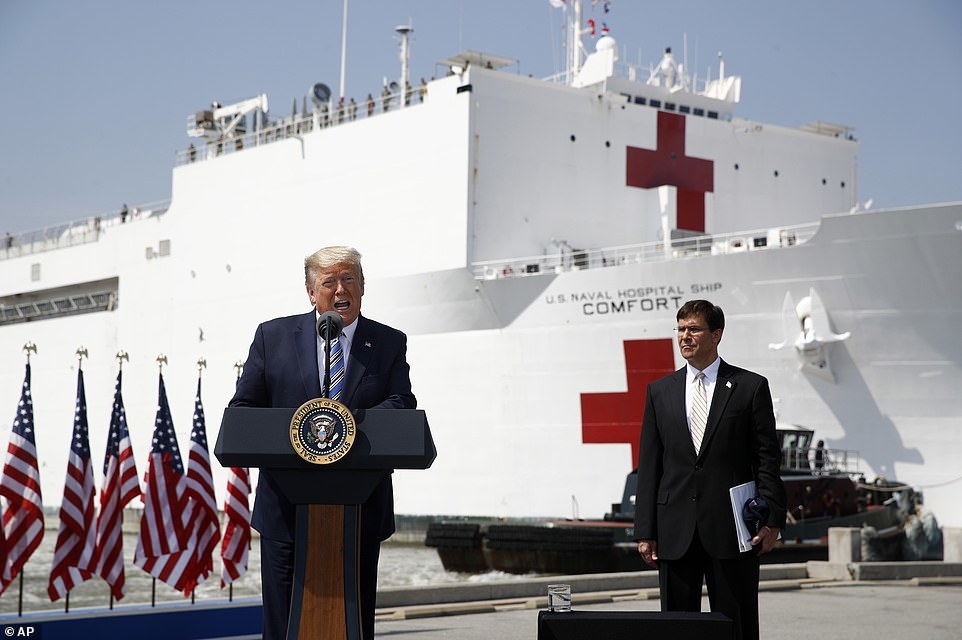 Dr Anthony Fauci, the Director of the National Institute of Allergy and Infectious Diseases, indicates that White House advisors pulled back Donald Trump from the hasty imposition of a quarantine on New York, New Jersey, and Connecticut.

After discussions with the President, we made it clear and he agreed it would be much better to do what’s called a strong advisory.

The reason for that is you don’t want to get to the point that you’re enforcing things that would create a bigger difficulty, morale and otherwise, when you could probably accomplish the same goal.

Fauci said that there may be more than 100,000 deaths and millions of cases in the US.

Claims are circulating that Donald Trump is blocking vital medical supplies to states whose Governors he does not like.

Michigan’s Gretchen Whitmer, insulted by Trump as “the woman from Michigan”, said, “We started procuring every item we could get our hands on. But what I’ve gotten back is that vendors with whom we had contracts are now being told not to send stuff here to Michigan.”

She did not blame Trump but indicated that she could not get a phone call with Trump on Thursday night. Trump said on Friday that he had ordered Vice President Mike Pence not to talk to Whitmer.

Democratic-leaning Massachusetts has received only 17% of protective gear which it requested. Maine has only been given 5%, and the delivery of masks and supplies to Colorado is “enough for only one full day of statewide operations.”

In contrast, Florida — where Governor Ron de Santis has been a vocal defender of Trump — has been sent two shipments fully meeting its requests and is awaiting a third.

Pamela Karlan: “What would you think if, when your governor asked the federal government for the disaster assistance that Congress has provided, the President responded, ‘I would like you to do us a favor.’ I’ll… send the disaster relief once you brand my opponent a criminal.” pic.twitter.com/J96FY30k3y

ORIGINAL ENTRY: US deaths from Coronavirus double in 48 hours, while Donald Trump spends Saturday visiting a ship and bluffing a quarantine of people in New York, New Jersey, and Connecticut.

The US death toll, which was about 250 last weekend, passed 1,000 on Thursday. Yesterday it reached 2,046, with a surge in Illinois accompanying at least 728 in New York State.

There are 121,289 confirmed cases as of Sunday morning.

But Trump was focused on a photo opportunity in Virginia, alongside a US Navy medical ship embarking for New York City, and picking a fight with New York Governor Andrew Cuomo.

Angered at praise for Cuomo’s daily press conferences amid New York State’s crisis, Trump suddenly announced to reporters and on Twitter that he was considering the quarantine.

He gave no details about how the restrictions would be implemented or enforced.

I am giving consideration to a QUARANTINE of developing “hot spots”, New York, New Jersey, and Connecticut. A decision will be made, one way or another, shortly.

See also EA on talkRADIO: Coronavirus — How Much Damage is Trump Doing?

At his press conference, Cuomo said Trump had spoken to him about the despatch of the US naval ship, being used as a floating hospital, but not about the quarantine: “I don’t even know what that means.”

The Governor later told CNN that shutting off entire states was a federal declaration of war” which would lead to “total mayhem”:

If you start walling off areas all across the country it would just be totally bizarre, counterproductive, anti-American, antisocial.

He noted that the financial center of the US would be paralyzed and asked, “How would you ever operationally stop goods from coming to New York, New Jersey and Connecticut?….I can’t believe he’s considering that.”

Trump backed away while trying to save face with a “travel advisory”:

….Federal Government. A quarantine will not be necessary. Full details will be released by CDC tonight. Thank you!

The CDC noted, “The Governors of New York, New Jersey, and Connecticut will have full discretion to implement [the advisory].”

Some states have issued orders for 14-day self-quarantine of visitors from other states. Rhode Island, Texas, Florida, Maryland and South Carolina have issued the measure for those from New York. Florida is also quarantining residents of Louisiana.

Kentucky Governor Andy Beshear said on Saturday that Kentuckians should not travel into Tennessee.

Trump’s failed bluff is part of his escalating fight with US Governors seen as more effective than the Administration in dealing with the crisis.

Trump was agitated that the State leaders, including Cuomo, highlighted the failure of the Federal Government to provide life-saving ventilators. Trump dithered over invocation of the Defense Production Agency, insisting that the private sector would ensure the supply.

But when a White House negotiation with General Motors and Ventec Life Systems broke down over a $1 billion price tag, Trump derided Cuomo’s statement that 30,000 ventilators were needed for New York State alone:

On Friday, Trump reversed course, invoking the Defense Production Act to order GM to make the ventilators — even though the automobile manufacturer said it was proceeding despite the failed negotiation with the White House.

But with Governors noting the lack of action by the Administration, Trump launched into a tirade against leaders such as Washington’s Jay Inslee and Michigan’s Gretchen Whitmer, who have been hailed for their handling of the situation. He said he had ordered Vice President Mike Pence not to communicate with the pair: “If they don’t treat you right, I don’t call.”