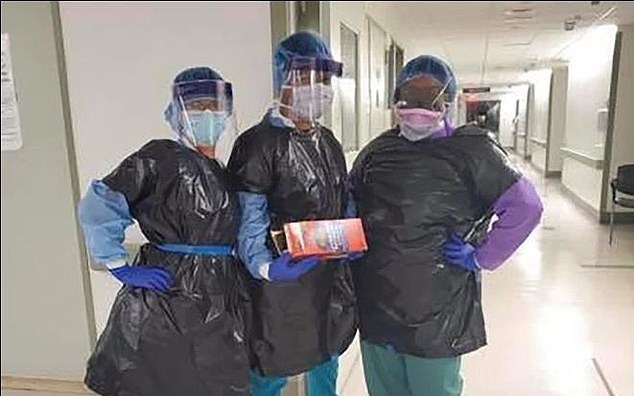 Trump ended his Thursday by attacking US Governors — and scoffing at their appeals in the crisis — in an appearance on his favored outlet Fox.

He told his friend Sean Hannity:

Trump was particularly agitated about Michigan Governor Gretchen Whitmer, who is being praised for her handling of the emergency.

Hi, my name is Gretchen Whitmer, and that governor is me 👋

I've asked repeatedly and respectfully for help. We need it. No more political attacks, just PPEs, ventilators, N95 masks, test kits. You said you stand with Michigan — prove it. https://t.co/FtWlTLZdqW

Donald Trump rambles, diverts, and denies as US sets records for Coronavirus cases and unemployment claims — and deaths surge past 10,000 mark.

A series of announcements on Thursday pointed to the World Health Organization’s warning of America as the imminent epicenter of the pandemic.

The number of confirmed cases reached almost 86,000, surpassing China and Italy. The death toll — only 150 a week ago — is now at least 1,195, with 246 reported on Thursday. Hospitals face exhaustion of masks, ventilators, and supplies with doctors in New York City wearing trash bags for “protection”.

The economic shock was demonstrated by 3.3 million Americans filing for unemployment in the week ending March 21. The total is almost 5x the previous monthly record of 695,000, set in 1982.

The grim news accompanied revelations that the Trump Administration had set aside a 2016 National Security Council playbook for dealing with pandemics, and that it ignored the outcome of a pandemic exercise last year.

State and local officials pleaded on Thursday for assistance; however, the White House cancelled a plan to work with the private sector to produce up to 80,000 ventilators, balking at the cost of $1 billion.

But Trump, having denied the seriousness of Coronavirus for almost two months, insisted in Thursday’s press briefing:

It’s nobody’s fault. Certainly not in this country. Nobody’s fault. We got very lucky when we made a decision not to allow people in from China on a very early date. I say that because some people don’t want to accept it, but this was a great decision made by our country, or the numbers that you’re talking about – we’re a big country – they’d be far greater, far bigger.

Trump says earlier that he's used the Defense Production Act twice. When a reporter asks him if he will explain the instances when he used it, he responds "you'll be notified" when that happens.
No further clarity after weeks on this.

Trump struggled for coherence throughout the presentation, searching for self-defense by denying the latest news and sweeping away the casualties:

Many people have it. I just spoke to two people that had it. They never went to a doctor, they didn’t report it….The people that actually die, that percentage is much lower than I actually thought….The mortality rate, in my opinion, is way down.

Trump said of the unemployment figures:

I heard it could be six million, could be seven million. It’s 3.3 or 3.2, but it’s a lot of jobs, but I think we’ll come back very strong. The sooner we get back to work – you know, every day we stay out it gets harder to bring it back very quickly, and our people don’t want to stay out … I think you’ll see a very fast turnaround once we have a victory over the hidden enemy.

Despite the mounting death toll, Trump clung to defiance of the Government’s medical experts with his insistence that social distancing guidelines — belatedly issued by the Administration last week — could soon be lifted for “large sections” of the US; however, he did retreat from his claim that this could be done by Easter, April 12.

Officials tried to provide cover for Trump by playing down any problem over ventilators and medical supplies. Just before the briefing, Governor Andrew Cuomo of New York State, which has 40% of America’s confirmed cases, said the situation was critical.

Trump says earlier that he's used the Defense Production Act twice. When a reporter asks him if he will explain the instances when he used it, he responds "you'll be notified" when that happens.
No further clarity after weeks on this.

But Dr. Deborah Birx, the coordinator of the White House Coronavirus Task Force, said: “To wake up this morning and look at people talking about creating DNR situations, Do-Not-Resuscitate situations for patients — there is no situation in the United States right now that warrants that kind of discussion.”

“At Our Breaking Point”

As Trump spoke, first-hand testimony from across America countered his diversions and disinformation.

The number of hospitalized patients in New York State rose by 40% in a day to 5,327, with 1,290 in intensive care. New York City hospitals began creating makeshift morgues as the death toll neared 300. There were more than 6,400 emergency calls to 911, surpassing the record on September 11, 2001.

A registered nurse in a Long Island Hospital gave an emotional account on social media:

I haven’t slept because my mind won’t shut off. I cried in the bathroom on my break, as I peeled off the PPE [protective equipment] from my sweaty self, mask indentations on my face. I cried the entire ride home….

I cry for the ones who passed away. I cry because we intubated 5 patients within 10 min and I’m terrified. I cry for my co-workers, because we know it will get worse and I already feel like that is impossible and we are already at our breaking point, I cry for the parents, children, siblings, spouses who cannot be with their loved ones who may be dying but cant have visitors because there is no visiting allowed.

Dr Birx tried to support Trump’s downplaying of the crisis for his “large sections” of the US, saying that40% of the country has “extraordinary low rates” of Coronavirus” and about 19 states have fewer than 200 cases.

However, she said the Chicago and Detroit areas are likely to be the new “hot spots” for the outbreak.

The Administration’s infectious diseases specialist, Dr Anthony Fauci, was not at the briefing. However, in an Instagram interview with Stephen Curry, he implicitly knocked back Trump’s declaration.

“You need to see the trajectory of the curve start to come down” before lifting any social distancing measures, Fauci said.

Stepping Back from Ventilator Pledge

Meanwhile, the White House withdrew its planned announcement of a joint venture between General Motors and Ventec Life Systems for the 80,000 ventilators.

The postponement came when the Federal Emergency Management Agency said it needed more time to assess if the $1 billion cost is prohibitive.

Officials said the deal might still happen but they are examining at least a dozen other proposals. They said the initial promise by the two companies that the joint venture could quickly turn out 20,000 ventilators had contracted to 7,500, with even that number in doubt.

General Motors and Ventec said the project, with the retooling of a GM plant in Michigan, was proceeding.

In the briefing, Trump questioned the need for a mass supply of ventilators:

Continuing his chaotic ramble, Trump flipped during the day from blaming China — a tactic to divert attention from his failings and to bolster his 2020 re-election campaign — to praising it.

In the briefing, Trump defended his pejorative label of “Chinese virus”, even as he spoke of a forthcoming call with China’s leader Xi Jinping:

But after the chat with Xi, Trump’s star-struck love of conversations with leaders took over, as he replaced “Chinese virus” with “Coronavirus”:

Just finished a very good conversation with President Xi of China. Discussed in great detail the CoronaVirus that is ravaging large parts of our Planet. China has been through much & has developed a strong understanding of the Virus. We are working closely together. Much respect!

Trump could also take consolation, amid the barrage of news about the current and future toll, with a continued stock market rebound as Congress neared approval of a $2 trillion economic stimulus package.

The Dow Jones rose more than 6% and the S&P 500 almost matched that increase.

The stock market had plummeted 35% from its February 21 level, erasing all gains during Trump’s Presidency, but is now about 25% lower.