TrumpWatch, Day 1,161: Hospitals at Risk of Being Overwhelmed as Trump & Co. Play Politics with “Wuhan Virus” 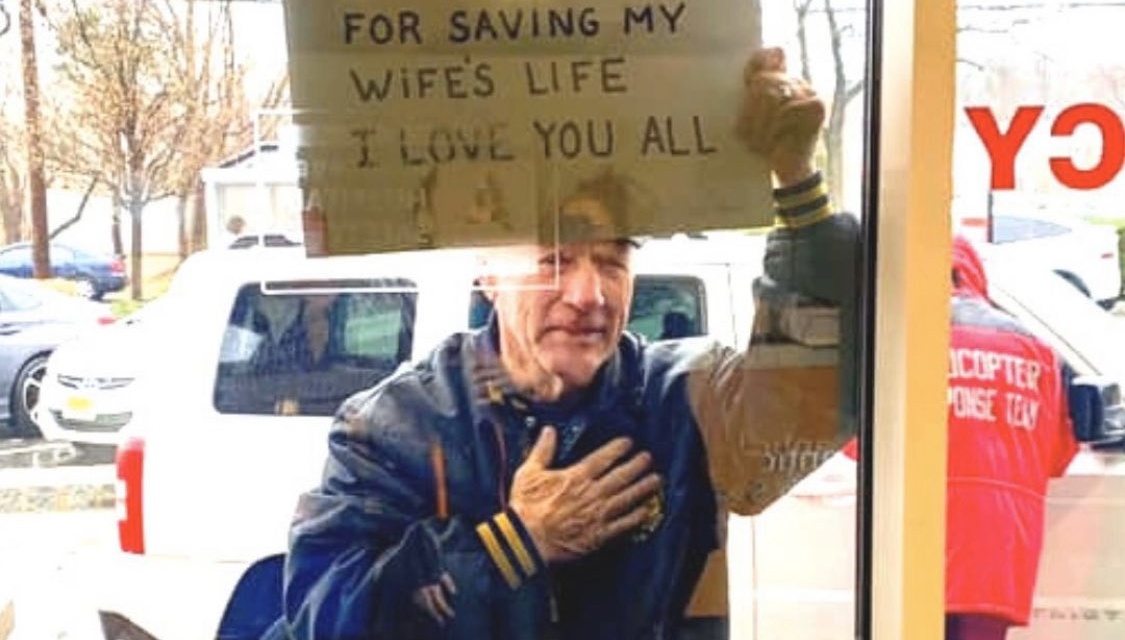 A man in Morristown, New Jersey, thanks emergency room staff for saving his wife’s life, March 25, 2020

Hospitals in the US are at risk of being overwhelmed by the rapid spread of Coronavirus cases.

But Donald Trump and his inner circle play politics on Wednesday, declaring that social distancing can be stopped by Easter and obstructing a G7 meeting with the insistence that the illness is called “Wuhan virus”.

In New York State, where there have been 285 deaths and more than 30,000 cases, a doctor warned CNN:

To think that we’re in New York City and this is happening. It’s like a third-world country type of scenario. It’s mind-blowing.

He emphasized a trend in which patients were mainly over 70, but are now under 50.

The high number of cases — New York City alone has 17,856 with 199 deaths — is in part due to a testing system which is far ahead of any effort by the Trump Administration. New York is now testing more people per capita than South Korea, where the response is being seen as successful in containing the virus.

But the system is facing the shortage of masks, protective equipment, and ventilators. Governor Andrew Cuomo has issued a mandate for an increase of 50% in hospital capacity; however, even if this was doubled, there would be a shortage of 34,000 beds to meet projected cases in the next few weeks.

Cuomo, whose daily briefings are being praised as an alternative to the disinformation of Donald Trump, said Tuesday that social distancing measures have eased the spike in cases from a doubling every 2 days to a doubling every 4.7. But he noted:

The reality is that what we’re seeing right now in our emergency rooms is dire.

Last week when I went to work, we talked about the one or two patients amongst the dozens of others that might have been a Covid or Coronavirus patient. In my shift yesterday, nearly every single patient that I took care of was Coronavirus, and many of them extremely severe. Many were put on breathing tubes. Many decompensated quite quickly.

There is a very different air this week than there was last week.

Other states are reporting critical situations. Some hospitals in Louisiana, notably in Orleans Parish, face an exhaustion of basic necessities by early April. Ventilators, vital to keep patients alive, are scarce.

The US has between 160,000 and 200,000 ventilators, but could need up to a million, according to the Society of Critical Care Medicine. In New York, the epicenter of the outbreak in the U.S., hospitals are already on the verge of running out, Gov. Andrew Cuomo said this week.

The Trump Administration has refused to use the Defense Production Act to assume oversight of the production and supply of ventilators, saying corporations can fill the need and individual State governors should pursue purchase and allocation.

Frank Kendall, Undersecretary of Defense for acquisition and logistics in the Obama Administration, notes:

This is a national crisis. In a time of scarcity, you can’t leave it up to companies and governors to manage it themselves.

As the states become more desperate, someone has to referee the situation. The marketplace isn’t set up to do that.

A “senior Health and Human Services official” told Axios that the Government should have engaged the private sector over the medical supplies in mid-January.

“By waiting to fully appreciate and acknowledge this as a once-in-a-lifetime crisis, this was a colossal missed opportunity,” the official said.

Trump and Co.: Let’s Talk About The Wall and “Wuhan Virus”

There are now at least 65,201 confirmed cases and 928 deaths across the US, according to CNN Health. Dr Anthony Fauci, the Government’s infectious diseases expert, said the pandemic is “accelerating” and “there are other parts of the country which we need to get a better feel for what is going on”.

Fauci spoke of the necessity of stay-at-home orders, now implemented in at least 18 states and cities like New Orleans, Louisiana:

I have spoken to the political officials in New Orleans and in the state of Louisiana. They are now shutting things down in a very vigorous way. It is likely that that should have been done a little bit sooner — not blaming anyone on that but you get caught unaware because the nature of this outbreak.

But in Wednesday’s White House briefing, Trump defied Fauci and continued his dismissal of the situation, repeating that most of the US could be fully open for business by April 12.

Trump maintained his assault on the media, and preferred to speak about topics such as his Wall with Mexico — an irrelevance at the moment, given the closure of the Mexico-US border amid Coronavirus.

President Trump is back talking about a "big beautiful wall" on the southern border and complaining that he had to push NATO countries to pay more during the coronavirus outbreak.

This is quite the briefing today.

When he did speak about Coronavirus, Trump proclaimed that New York Governor Cuomo and New York City Mayor Bill de Blasio were happy with the Federal Government sending 4,000 ventilators to the state.

But the provision is far from the need for 30,000 ventilators, according to Cuomo, and de Blasio responded: “The world we knew is gone. And it’s not coming back, not for the next few months. That’s the blunt truth. We’re gonna lose some people.”

Trump maintained, “It’s hard not to be happy with the job we’re doing.”

While saying that social distancing is “so important”, Trump insisted in defiance of his medical advisors, “There are large sections of our country probably can go back much sooner than other sections and we’re obviously looking at that also.”

Meanwhile, Secretary of State Mike Pompeo hindered progress in a video call among ministers from the G7 countries, insisting on “Wuhan virus” rather than Coronavirus as the name of the illness.

Trump and his supporters have used the label to try and deflect any blame to China, and to propel Trump’s 2020 re-election effort despite the outbreak.

European officials said Pompeo insisted on “Wuhan virus”, even though the World Health Organization and medical specialists have said the pandemic is a global virus.

In a solo news conference after the meeting, the Secretary of State continued to use the label: “Every one of the nations that was at that meeting this morning was deeply aware of the disinformation campaign that the Chinese Communist Party is engaged in to try and deflect from what has really taken place here.”

French Foreign Minister Jean-Yves Le Drian countered, “[I] underscored the need to combat any attempt to exploit the crisis for political purposes and expressed the view that the unity of all in order to effectively combat the pandemic must now take precedence over any other considerations.”