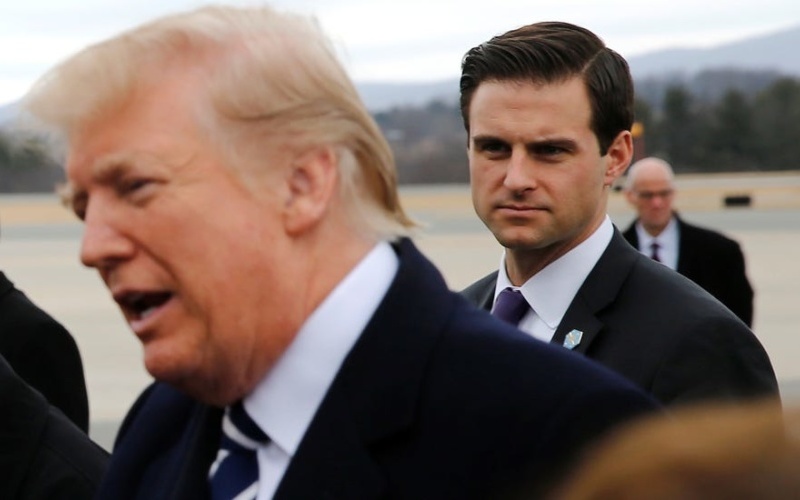 Having fired officials who testified in his impeachment hearings over abuse of power, Donald Trump instructs the White House to identify and removed “disloyal” staff.

Trump has named Johnny McEntee, his former travel coordinator, to carry out the search. McEntee left the White House in disgrace in March 2018 over his gambling debts, but has returned as director of personnel.

“Several administration officials and others familiar with the matter” said McEntee has begun asking for names of political appointees who are not fully supportive of Trump. One source “familiar with the president’s directive” said Trump instructed McEntee to “get rid” of those who fail the test.

The sources did not know of Trump’s specific criteria to prove “loyalty”.

But the officials said the 29-year-old McEntee will make a presentation to Trump, to whom he reports directly.

On February 7, two days after Republican senators shut down his trial, Trump had National Security Council staff Lt. Col. Alexander Vindman escorted from the White House, using Twitter to accuse the decorated war veteran of disloyalty to the US.

Trump fired US Ambassador to the European Union Gordon Sondland, a key figure in the campaign Trump and personal attorney Rudy Giuliani for Ukraine to investigate political rivals.

Both men had defied a White House order not to obey Congressional subpoenas for testimony in the impeachment hearings.

Trump announced the purge on February 13:

DRAIN THE SWAMP! We want bad people out of our government!

A series of dismissals, reassignments and resignations have followed, with staff at the National Security Council, State Department, and Justice Department among Trump’s targets.

The Defense Department’s John Rood, who certified that Ukraine had met anti-corruption obligations — and thus undercut Trump’s freeze on military aid to get Kiev’s statement of investigations — was fired last week. Deputy National Security Advisor Victoria Coates was removed and moved to an advisory position in the Energy Department.

Trump has been marked by his demand for loyalty since the start of his Administration. At the outset of the inquiry into the Trump campaign’s links with Russian officials, he used a private dinner with FBI Director James Comey to ask for a commitment.

Comey would not promise loyalty, and was fired by Trump in May 2017 in an attempt to quash the inquiry.

Last week Trump dismissed Acting Director of National Intelligence Joseph Maguire after an intelligence briefing to legislators that Russia is interfering in this year’s US elections. Trump named US Ambassador to Germany Richard Grenell, a staunch loyalist who has no intelligence experience, as the replacment.

Far from checking Trump, his inner circle are enabling him. Son-in-law Jared Kushner is reportedly leading the quest for dismissals. Chief of Staff Mick Mulvaney used a speech at the Oxford Union to invoke a “deep state” and complain that the Administration cannot fire more officials, including those who testified in the impeachment hearings.