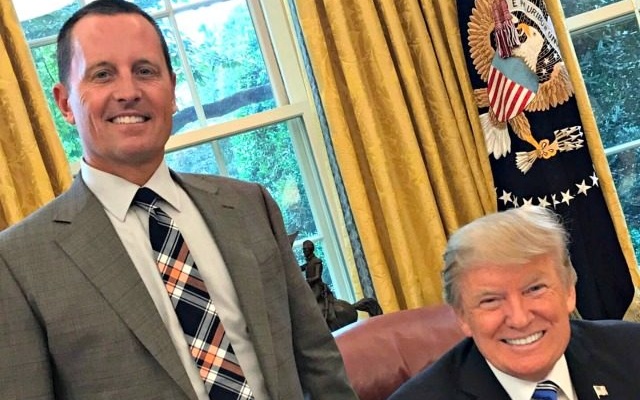 Angered by a warning of Russia’s interference in the 2020 election, Donald Trump begins a purge of US intelligence agencies.

Trump has railed for years against the intelligence services, accusing them of complicity in a “deep state” campaign against him amid the Trump-Russia inquiry. However, his freedom to act has come after Republican senators shut down his impeachment trial earlier this month over his abuse of power.

Trump acted quickly after a briefing of US legislators this week that Russia, having backed Trump in 2016 with the hacking and dissemination of e-mails to damage Hillary Clinton, is trying to intervene this year. The intelligence agencies also say Moscow is looking to cause disruption with assistance for Sen. Bernie Sanders in Democratic primaries.

Sanders revealed the briefing on Friday, calling Russian President Vladimir Putin an “autocratic thug” and warning Moscow to stay out of the election.

Meanwhile, Trump has abruptly dismissed Acting Director of National Intelligence Joseph Maguire, blaming him for the information given to legislators. Trump named US Ambassador to Germany Richard Grenell, a staunch loyalist, as Maguire’s successor.

TrumpWatch, Day 1,127: Stone Gets 30 Months in Prison; Trump Blows Up Over Report on Russia’s Interference

Grenell then replaced Deputy Director Andrew Hallman, a long-time intelligence officer, with Kash Patel, a key actor in the spreading of misinformation and conspiracy theories to protect Trump from the Russia inquiry.

As top aide to Rep. Devin Nunes, Patel pushed “Operation Medusa”, accusing the FBI of a coup attempt against Trump. He was the author of Nunes’ discredited memorandum, released in February 2018, which accused the FBI of illegal surveillance in its monitoring of Russian officials and Trump campaign staffer Carter Page in
2016.

Nunes was forced to step aside as House Intelligence Committee chair in spring 2017, because of his collaboration with the White House. However, he persisted in his conspiracy theories on behalf of Trump and remaining the ranking minority member of the Committee during its impeachment hearings last autumn.

In a further sign of his protection of Trump, Grenell — who has no intelligence experience — has requested the intelligence behind the classified briefing last week to the House Intelligence Committee. And Trump’s camp said Patel has been given oversight of the intelligence community.

Trump told reporters on Thursday that he was considering the appointment of another loyalist with no intelligence epxerience, Rep. Doug Collins, as the permanent Director of National Intelligence.

But Collins, who protected Trump during the House Judiciary Committee’s impeachment hearings by repeating the mantras of “witch hunt” and “hoax”, ruled himself out on Friday.

The legislator is running for a Senate seat in Georgia and is in the midst of a toughly-contested Republican primary.

Three officials said Trump is now considering Pete Hoekstra, a former Republican congressman who is now US American ambassador to the Netherlands.