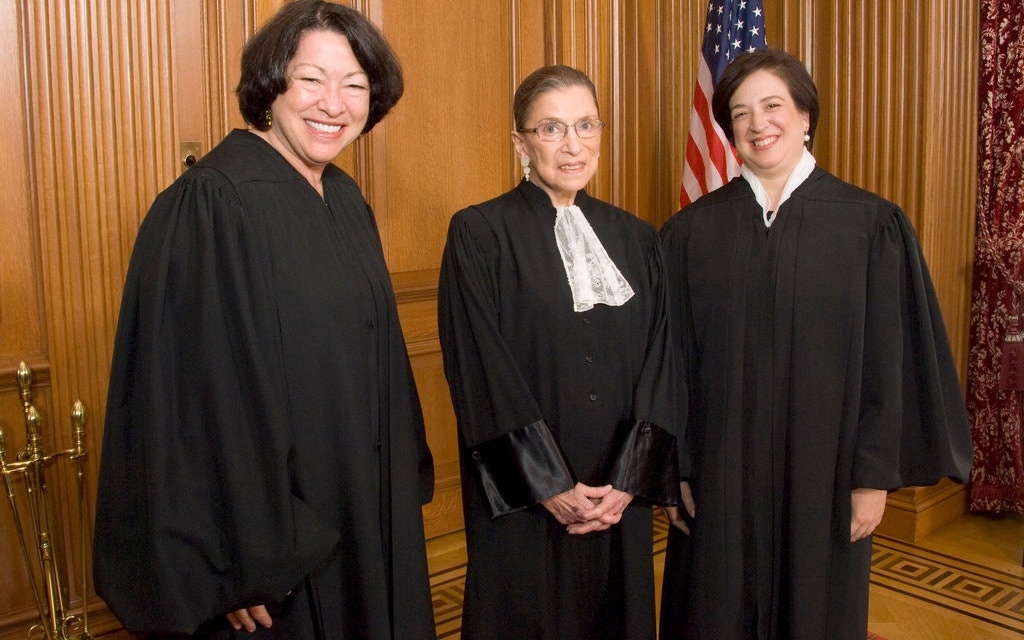 In his latest attack on judges, Donald Trump has denounced Supreme Court Justices Sonia Sotomayor and Ruth Bader Ginsburg and said they should recuse themselves from any case involving his Administration.

Even during a trip to India, Trump’s attention and anger were centered on Washington and courts, days after he failed to get a light sentence for his long-time friend and operative Roger Stone.

Trump was further triggered by Sotomayor’s dissent, in a Friday 5-4 ruling by the Court enabling the Administration’s “public charge” rule to go into effect.

The Administration is seeking to use the “public charge” to deny visas and entry to the US for any immigrants who may receive public services such as Medicaid, food stamps, and housing vouchers.

Critics warned that the provision would not only punish entering immigrants, including those seeking to join relatives already in the US, but legal immigrants already resident in the US. About one in seven adults in immigrant families did not participate in a non-cash safety net program last year because of fear of losing green card status in the future.

According to Julia Gelatt of the Migration Policy Institute, 69% of about 5.5 million people who were granted green cards in the last five years could have been blocked by the public charge restriction.

Sotomayor challenged the majority’s acceptance of the Administration’s emergency motion to override a stay on implementation of the rule, amid a series of legal challenges.

Claiming one emergency after another, the Government has recently sought stays in an unprecedented number of cases. It is hard to say what is more troubling that the Government would seek this extraordinary relief seemingly as a matter of course, or that the Court would grant it.

She went farther by warning that the Supreme Court is being bent to the will of Trump and his advisors: “[It] has been all too quick [to grant emergency requests]….Make no mistake: Such a shift in the Court’s own behavior comes at a cost.”

She argued that this risked the legitimacy of the judicial branch across a series of issues: “Make no mistake. This Court is partly to blame for the breakdown in the appellate process.”

Trump did not take on Sotomayor’s legal reasoning, or even the politics of his anti-immigrant policies. Instead, he quoted the Fox TV polemicist Laura Ingraham and issued his Twitter blast.

….on all Trump, or Trump related, matters! While “elections have consequences”, I only ask for fairness, especially when it comes to decisions made by the United States Supreme Court!

Beating Down the Judges

As a businessman and then as President, Trump has repeatedly insulted judges in an effort to undermine their authority.

Before taking office, Trump derided Judge Gonzalo Curiel — presiding over a class-action suit against Trump University — as a “Mexican”. Curiel, on the bench of the Southern District of California, was born in Indiana.

(Trump University eventually paid out $25 million to avoid a final ruling in the case.)

Within days of his inauguration, Trump tried to push aside judges who held up his “Muslim Ban”, forbidding entry to the US by citizens of seven mainly-Muslim countries. He claimed they were blocking his efforts “to keep criminals and terrorists the hell out of our country”.

Trump later called judges a “laughingstock” and a “joke” over their rulings on cases from immigration to sentencing for violent crimes.
He said those who prevented his attempt to deny asylum to migrants were a “disgrace” and “Obama judges”, bringing a rare rebuke from Supreme Court Chief Justice John Roberts.

Is this the Judge that put Paul Manafort in SOLITARY CONFINEMENT, something that not even mobster Al Capone had to endure? How did she treat Crooked Hillary Clinton? Just asking! https://t.co/Fe7XkepJNN