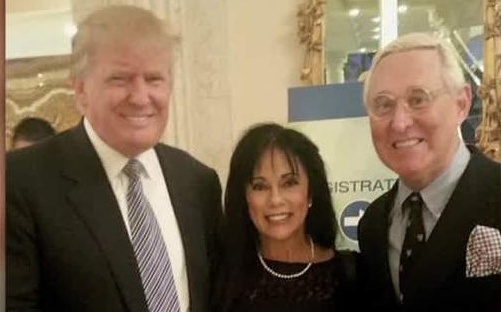 Donald Trump with Roger Stone and his wife Nydia (File)

Jackson issued a six-page order on Sunday night dismissing the defense request that she leave before ruling on their motion for a new trial.

Stone was the 2016 Trump campaign liaison’s with WikiLeaks as the organization disseminated e-mails hacked by Russia to discredit Democratic nominee Hillary Clinton. He was convicted on seven charges of lying to Congress and tampering with a witness.

She defended the prosecutors accused by Trump of working in a “deep state” conspiracy against him: “Any suggestion the prosecutors did anything…improper or unethical is incorrect. The truth still exists.”

Trump responded by attacking Hillary Clinton and former FBI directors James Comey and Andrew McCabe. Stone’s attorneys filed on Friday for a new trial, a move foreshadowed by Trump’s quotation of Fox TV analyst Andrew Napolitano three days earlier: “I think almost any judge in the Country would order [it], I’m not so sure about Judge Jackson, I don’t know.”

Trump’s camp and Stone’s attorneys are spreading the claim that the trial was corrupted by the bias of the forewoman of the jury, with no evidence other than assertions of social media posts criticizing Trump.

That juror is so biased and so tainted, that shouldn’t happen in our criminal justice system.”

Stone’s defense team said Jackson must recuse herself because she said jurors “served with integrity”. The judge spared no words in dismissing the filing:

Judges cannot be “biased” and need not be disqualified if the views they express are based on what they learned while doing the job they were appointed to do.

The defendant has not suggested that the Court said one word about him outside of the courtroom, or to anyone other than the parties, at any time. Its characterization of the jurors’ service was voiced on the record, and it was entirely and fairly based on the Court’s observations of the jurors in the courthouse.

The sharply-worded order was the latest challenge by Jackson to the political pressure to free Stone. She said as she passed sentence last Thursday:

The truth still exists. The truth still matters. Roger Stone’s insistence that it doesn’t, his belligerence, his pride in his own lies are a threat to our most fundamental institutions, to the very foundation of our democracy.

Nine days before the sentencing, Trump tried to lessen the punishment for his friend. Attorney General William Barr, amid a Trump tweet claiming “miscarriage of justice”, ordered senior Justice Department staff to overturn the prosecutors’ recommendation of a sentence of 7 to 9 years.

All four prosecutors withdrew from the case, and Barr tried to cover himself with a TV interview saying Trump’s tweets were making it “impossible” for him to do his job.

EA on Monocle 24: The Trump-Barr Manipulation of Justice