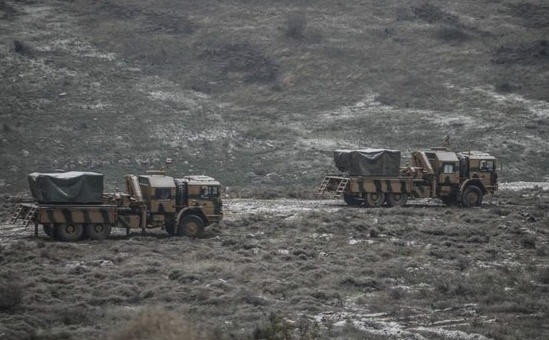 Anti-Assad fighters have downed a second regime helicopter this week.

A unit of the Turkish-backed Syrian National Army said the helicopter was downed with an anti-aircraft missile near Darat Azza in western Aleppo Province, amid an anti-Assad ground assault.

Rebels claimed that they took several villages along the frontline.

#Aleppo
The burning remains of the regime militia helicopter that has been downed in western rural Aleppo. pic.twitter.com/TtyBrY5t16

Earlier this week, the SNA downed a helicopter near Saraqeb, the key town in Idlib Province occupied by the Russian-regime offensive last week.

Protests across Idlib Province have condemned Russian-regime attacks and called on Turkey to intervene.

Civilians march out in demonstrations in several cities in northern Syria calling for an end to the Russian and Syrian bombing and demanded Turkish forces intervene to protect them from the oppression of the Assad regime, Russia and Iran.#syria pic.twitter.com/Q9Eca2Ak5l

A protest in the city of Idlib to support the Syrian revolution and call on the Turkish Army to take action#SYRIA_CALL#Syria pic.twitter.com/vsz9ZCWzXk

A protest demonstration near the "Bab Al-Hawa" crossing, calling on the Turkish army to protect civilians in Idlib pic.twitter.com/73nnEjryU6

ORIGINAL ENTRY: Considering whether to take a military stand against a Russian-regime offensive that has seized part of northwest Syria and displaced a million civilians, Turkey has deployed more forces in and near Idlib Province.

Defense Minister Hulusi Akar said on Thursday that more troops and equipment are being sent into the area where three million civilians — 20% of Syria’s remaining population — are trapped, and multiple rocket launchers are being set up on the Syrian border.

Akar indicated that the forces could be used against the offensive, which began last April and shattered a “de-escalation zone” declared by Russia and Turkey in September 2018, and also the hardline jihadist bloc Hay’at Tahrir al-Sham.

“Turkish troops will use force against everyone who does not abide by the Idlib cease-fire, including radical groups,” he told reporters on the sidelines of a NATO summit in Brussels.

After Russia and the regime seized almost all of northern Hama Province and part of southern Idlib, isolating a ring of 12 Turkish observation posts, Turkish President Recep Tayyip Erdoğan stepped up his rhetoric in the past two weeks. He finally criticized Russia by name and said Ankara would act if Assad regime troops did not withdraw from Idlib.

Hundreds of military vehicles moved in convoys to reinforce the observation posts.

But the offensive continued its assault, occupying the town of Saraqeb, at the junction of the Damascus-to-Aleppo M5 highway and the M4 highway across Idlib. Control of the M5 highway was completed on Wednesday.

Two sets of shelling by regime forces killed 14 Turkish personnel and injured 45. Ankara retaliated with attacks, claiming scores of targets and the “neutralizing” — killing or wounding — of 233 regime troops.

Erdoğan repeated Wednesday that Turkey will strike all threatening positions and that Ankara expects the Assad regime to withdraw behind the ring of observation posts by the end of February. Otherwise, he said, the regime will “face consequences”.

The Defense Ministry proclaimed Friday that another 63 regime troops had been “neutralized”.