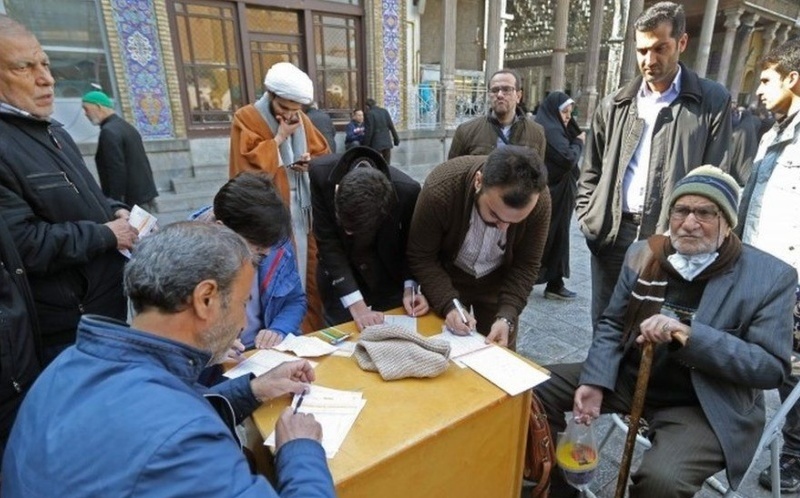 Iran’s regime is considering how to cope with a historic low in turnout for Parliamentary elections, a possible sign of public disenchantment over economic problems and a vote managed to ensure a large majority for hardliners and principlist conservatives.

After more than 36 hours of deliberation over how to handle the announcement, officials finally said on Sunday afternoon that the turnout was 42.5%, the lowest participation since the 1979 Islamic Revolution. In the capital Tehran, only about 30% of voters bothered to show up.

The hardline-principlist “victory” had been arranged by the Guardian Council, whose 12 members are appointed by the Supreme Leader and the judiciary, weeks ago. The Council barred almost 9,000 of more than 16,000 applicants, including more than 90% of reformist hopefuls.

Initially, the Council banned about 2/3rds of the candidates, including 92 current MPs. It reinstated 2,000 after a public protest by President Hassan Rouhani.

Hardliners and principlists were awarded 220 of the Majlis’ 290 seats. Independents took 34, and reformists only 20. The remaining 16 will be decided in run-off contests in April.

The most innovative explanation for the low turnout came from the Supreme Leader, even before the total was announced.

Ayatollah Khamenei tried to blame the reports of coronavirus, after Iranian officials confirmed 43 cases and eight deaths, as a Western plot to depress participation.

Turkey, Afghanistan, Pakistan, and Armenia were not persuaded by Khamenei’s claim: all closed their borders to entries from Iran. Restrictions were imposed by Iran’s other three neighbors, Iraq, Azerbaijan, and Turkmenistan

The medical emergency helped Iranian outlets push down the election news, with coronavirus stories dominating headlines in newspapers and sites such as Iran Daily.

The conservative Tasnim News relegates the election to 8th place, instead featuring a statement by Mohammad Javad Zarif on the troubled 2015 Iran nuclear deal.

Mehr leaves Iran entirely: “US Seeks to Stay in Iraq by Any Means: Iraqi Politician”.

Only Fars, the outlet of the Revolutionary Guards, tries to proclaim triumph, leading with the principlists’ sweep of the Tehran seats.

None of the sites even mention Sunday’s other big news, a 10% drop in the value of the weakened Iranian currency.

The rial tumbled to 156,000:1 v. the US dollar, after the international Financial Action Task Force confirmed that Iran will remain on a blacklist limiting its ability to carry out transactions.

The FATF has been negotiating for months for Iran’s accession, including to protocols against finance of terrorism. However, the Guardian Council and Parliament have continued to block two of four bills necessary for the accession.

The rial was already at a historic low of 45,000:1 at the start of 2018 before a steep descent over the next year. The Rouhani Government was finally able, at the cost of more than 40% inflation, to hold the currency at about 131,000:1 since last summer.