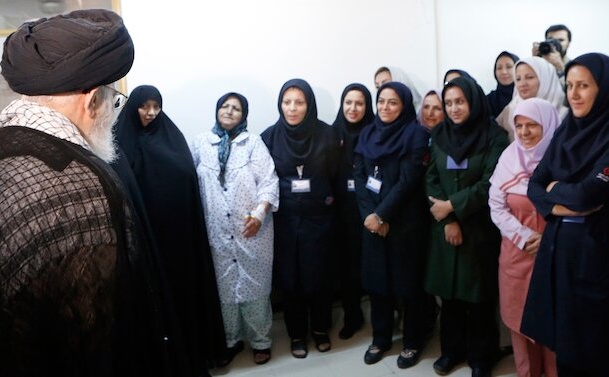 The Supreme Leader has expressed his hope that Iran will cope with Coronavirus, as the official death toll rises to 26 and Vice President Masoumeh Ebtekar tests positive for the illness.

In a brief video statement on Thursday, Ayatollah Khamenei thanked medical workers “for confronting and combating the recent disease, which has come into the country”.

We are hopeful this great and demanding work will not take very long, and that this inauspicious #CoronaVirus will soon be overcome by God’s grace. God willing, you will all be successful. May God’s peace and mercy be upon you.

The statement was a sharp departure from Khamenei’s denial on Sunday of any problem with the virus, even as officials said eight people had perished among 43 cases. He claimed Coronavirus was a Western plot “to discourage people from voting” in last Friday’s Parliamentary elections, where the regime suffered a record low turnout of 42.5%.

On Wednesday, President Rouhani was still declaring that the news about the spread of the virus was a Western “conpsiracy”.

But Iranian authorities raised their official count to 245 cases on Thursday.

Analysts believe the number may be in the thousands. The regime was only pushed into acknowledgement of the virus’s spread after a conservative MP said on Sunday that there had been 50 deaths and 250 suspected cases in the city of Qom alone.

Despite the spread, the Government is refusing to impose any quarantines. Rouhani said the measure would be a capitulation to “one of the enemies’ plots to spread fear” and “the virus is being controlled”.

His words were undercut on Thursday with the confirmation that Vice President Ebtekar is the seventh senior Iranian official to contract the virus.

Ebtekar had attended a Cabinet meeting on Wednesday where Rouhani made his declaration about “enemies’ plots”.

On Monday night, Deputy Health Minister Iraj Harirchi issued a video statement that he was ill, only hours after he — feverish and moppish his brow — told reporters that he would resign if the death toll was more than a quarter of the 50 claimed by conservative MP Ahmad Amirabadi Farahani.

The regime has cancelled some Friday Prayers, including in Tehran. However, mosques and shrines remain open, and events such as football matches have not been cancelled.