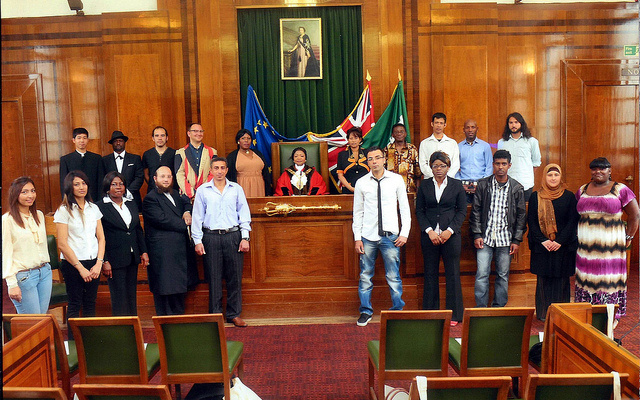 Editor’s Note: This analysis is based on an agenda for citizenship policy, submitted to the independent inquiry launched in August 2019 by the think tank British Future. It is written by Katherine Tonkiss, Agnes Czajka, Tendayi Bloom, Eleni Andreouli, Devyani Prabhat, Cynthia Orchard, Nira Yuval-Davis, Kelly Staples, and Georgie Wemyss.

As the Windrush scandal has shown, when a person is unable to show evidence of their citizenship, the results can be devastating.

Traditionally, UK citizenship has been associated with commitment to and participation in political institutions and traditions. More recently, increasing politicization of immigration and emphasis on “national belonging” have been part of a shift towards association of the legal status of citizenship with socio-cultural interpretations of” “integration”. These are ambiguous concepts and lead to different meanings of citizenship, for those who are born into it and for those who must apply for legal recognition of their citizenship later in life.

Moreover, with the Government’s creation of a “hostile environment” to discourage migration and settlement to those who “do not belong”, there has been a general transformation of citizenship duties for those who supposedly do belong. They are required to become unpaid, untrained border guards, making sure — under threat of criminalization — that they do not employ, rent, teach, or give any health or other public services to those who are not entitled to it by law. This creates a much more divisive and racialized society.

See also After the UK Election: The Government’s “Hostile Environment” Is Here to Stay

For those who do not have access to legal citizenship status in the UK by birth, obtaining that status is an often expensive, complicated, and lengthy process. The rules are complex, the fees are high, the application forms are long, and access to free legal assistance is limited or unavailable. Applicants must also prove themselves to be of good moral standing, and pass written exams to demonstrate their understanding of “Life in the UK”.

The UK is one of the founding members of the United Nations, co-drafter of its Charter, and signatory to all of the core UN human rights treaties. As such it has committed itself to ensure the human rights of everyone within the country and the territories under its control. This means that access to human rights, as found in those treaties, should not depend on legal status and should not be a part of citizenship policy.

Policy on the acquisition of citizenship should focus on ensuring that: (i) everyone making their lives in the UK or UK territories or who has a relevant overseas stake in the country can access citizenship; (ii) no one is inhibited in their access to citizenship on the basis of poverty, race, gender, sexuality, education level, age, or ill health; and (iii) legal citizenship status is full, permanent, and equal, enjoyed without discrimination.

To achieve these aims, access to the legal status of UK citizenship must not be difficult, burdensome, or expensive. Indeed, for those without any other citizenship — stateless people living in the UK — citizenship should be made even more easily available, with significantly reduced documentary requirements. This means that administrative hurdles to legal citizenship status should be reduced and financial costs abolished where possible, particularly for those without economic resources and for children.

Making access to the legal status of citizenship contingent on finances, employment, health, language, or some other factor sets these criteria as barriers to accessing the full political and legal rights and duties of UK citizenship. This has two particularly problematic implications. First, it risks creating a legal underclass in British society. Those unable to secure the legal status of citizenship of the UK risk being consigned to intractable economic and political vulnerability and discrimination. Second, there are people who, in being blocked from citizenship in the UK, remain stateless and unable to access citizenship in any state. This includes growing numbers of UK-born children who have lived their whole lives in the country.

Currently, as part of the citizenship acquisition process, people must take what is called a “Life in the UK” test, as well as prove competency in English or another official language. This undermines the aims of citizenship policy in three ways.

First, the test explicitly makes access to the legal rights and duties of UK citizenship contingent on the ability to recall facts relating to a narrow understanding of British culture and history, one which does not reflect the many ways in which Britishness is lived across the regions of the UK. It requires test-takers to be able to answer questions that relate to contested histories and fails to show equal respect for the expressions of Britishness among minority or marginalized communities.

Second, the need to take a test premised on the ability to recall a list of facts implicitly makes political membership in the UK dependent on study and exam-taking skills, which arbitrarily favors those with particular academic skills, educational background, or the resources for private tuition. This risks consigning people with poorer reading skills, weaker exam techniques, and learning and other disabilities to a lack of legal recognition.

Third, there has always been an expectation of linguistic diversity in the UK. This is evident, for example, in the official languages of the UK’s four nations and the many recognized minority languages. While access to language learning is crucial, linguistic diversity is not at odds with traditional notions of British life. If language requirements are retained, they should be basic, and people should be supported to acquire the necessary language skills through subsidized classes.

*The process of acquiring citizenship should be rational, simple and transparent, with adequate financial and legal support. It should be understood as an inclusive mechanism for ensuring legal recognition of citizenship, rather than a means to make prospective citizens “earn” their status.

*Citizenship as a legal status should be disentangled from integration policy. At the same time, ensuring fair and equal access to legal recognition of citizenship, which is then an equal and secure legal status, would contribute to a strengthened UK citizen identity.

Citizenship policy in the UK should be directed at ensuring that everyone living in the country can participate fully and without discrimination in political, social, and economic life.