After the UK Election: The Government’s “Hostile Environment” Is Here to Stay 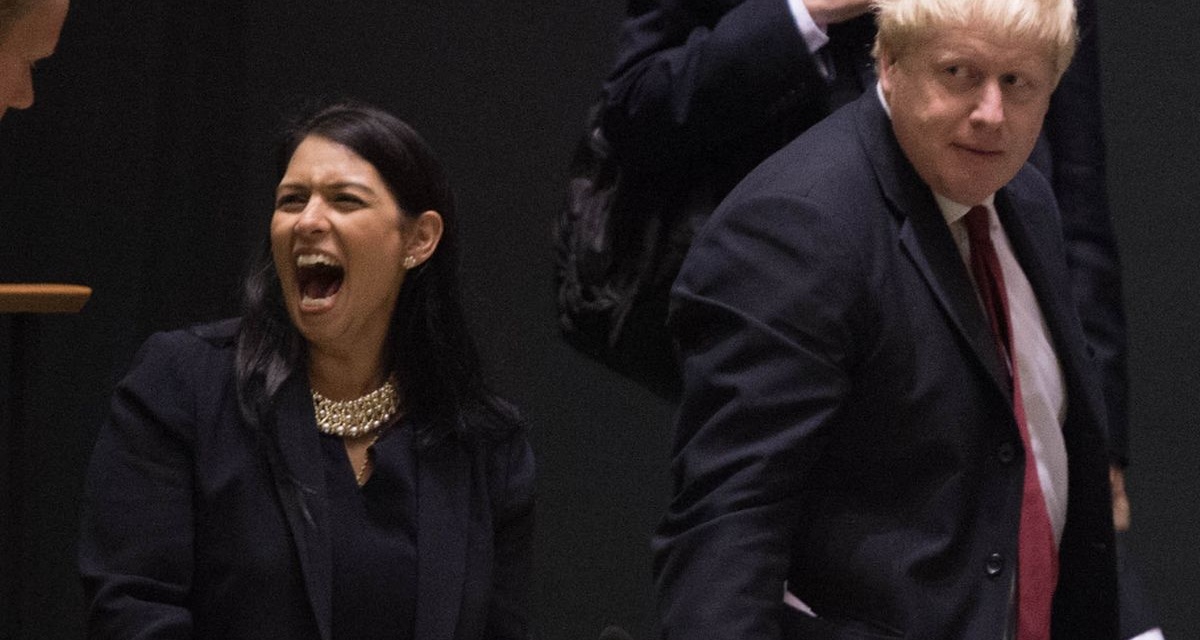 “Let the healing begin,” declared UK Prime Minister Boris Johnson as he celebrated the Conservative victory, the day after the UK General Election on December 12.

It was another deception from Johnson. This was the same man who said only days earlier about immigrants, “We will have control”: a blunt message that power over others, not healing, was the immediate priority beyond “Get Brexit Done”.

Two years after the Windrush scandal exposed the inner workings of the UK Home Office — and 71 years after the Empire Windrush first arrived in Britain — the Conservatives’ hostile environment for immigrants is deeply-rooted.

Apologies have been made and some compensation implemented for those of the Windrush Generation who faced intimidation, loss of jobs, and even deportation. But the bureaucracy poison that poisoned Britain’s political and cultural fabric is now accompanied by the “control” rhetoric of a party which has been willing to put all the UK’s problems on the back of “foreigners”.

Making a Mockery of Pain

Week after week, the heartbreaking stories of those affected by the Windrush scandal continue to be revealed.

When Dexter Bristol died, the UK bureaucracy was absolved when the hostile environment was ultimately ruled out as a contributing factor. But the fact that it was even considered speaks about an inhumanity in which immigration policY could be so brutally enforced —the stress forced upon Bristol to prove his identity was more than an apology can ever cover.

For Roy Harrison, life is still desolate. Despite the fact that he has grown up in the UK and qualifies for indefinite leave to remain, he is faced with deportation due to a conviction for theft. Initially he was given a letter from the Home Office that granted him permission to stay, but this brief period of safety was overtaken in what the Home Office called an “administrative error”. Hardship did not end with eight months in prison and being moved to immigration detention: Harrison is no longer able to access benefits, cannot work, and is resigned to living in a shed on the outskirts of a council estate.

All I can remember about my early life in Jamaica is being an outcast….My life is here in the UK. I have never known anything else.

All I want is to have my freedom back. I’m terrified and I’m always looking over my shoulder for the Home Office.

In this system, the basic dignity of people is no longer a priority. A bureaucratic error can overturn someone’s whole life; a banal mistake can force him or her into hiding. For those deemed targets, the hostile environment provides any excuse to remove those that are deemed unwanted.

While many of the Windrush Generation have been granted citizenship, for those like Sonia Williams the financial insecurity and mental strain will not resolved. They will not disappear with the status of citizen. Anything less than real reform and an overhaul of the system makes a mockery of the pain, humiliation, and disrespect.

In June, the first Windrush Day celebrated the initial arrivals at the Tilbury Docks in 1948.
Early this year, the Government organised a “Windrush engagement” event.

But, as immigration lawyer Jacqueline McKenzie — who has worked directly with those affected — notes, events such as these are further snubs to victims. Compensation and reparations are replaced by drinks, canapes, and photographs of a caring and repentant Home Office.

Paving the Way for Hostility: From May to Patel

The PR campaigns and apologies cannot hide that the ideas and rhetoric behind today’s immigration policies have been passed down from one administration to another.

Theresa May’s term as Home Secretary from 2010 to 2016 saw immigration policy morph into today’s hostility. In Operation Vaken, vans drove around with “Go Home” signs, the intimidating manifestation of immigration targets set at tens of thousands. In 2012, May declared, “The aim is to create, here in Britain, a really hostile environment for illegal immigrants.”

At the time, an official said, “It’s going to be difficult for any Home Secretary to put their own stamp on things.” But each of May’s successors seemed content to continue the policies by any means necessary.

Despite apologies from the Home Office, Amber Rudd refused in early April 2018 to admit that the hostile environment had any role to play in the Windrush Scandal. She denied all knowledge of targets or quotas. But upon the release of two leaked documents, it became clear that Rudd was more than complicit and aware of the goings-on within the Home Office.

Sajid Javid attempted to compensate for his predecessor’s mis-shaped policies and offered compensation for the Windrush Scandal victims. But his declaration of the end of the hostile environment was merely a more respectable face for it. As Gracie Bradley from the human rights group Liberty notes, the hardline policy is so deeply embedded that “the government thinks it can potentially get away with calling it ‘compliant’ now”.

The current Home Secretary, Priti Patel, says she wanted to “end freedom of movement once and for all”. A Home Office spokesperson reframes this as:

Take back control of our border….Ending free movement means we are no longer required to give unlimited and uncontrolled access to those from EU countries when they are coming here seeking to work.

This is not a matter of one politician or one administration, but the long-term construction of an ill-judged immigration policy in which Governments have systematically presided over institutional damage. The hostile environment did not have to sneak into UK politics and society — it walked straight in through the front door.

This has been exemplified by shady data-sharing between the Home Office and the National Health Service, allowing immigration status information to be checked before individuals are treated. Another terrain for immigration surveillance has been established as thousands of people have been wrongly denied healthcare or charged amounts of £2000.

Dr Neal Russell treated a baby with complications that could have been picked up on antenatal visits, but the mother was too scared to visit. Russell wrote, “I have seen how a political agenda has been allowed to stand in the way of patients accessing health care.”

Fringe ideas have become mainstreamed, and immigration monitoring has been outsourced: not only with doctors, but also with landlords, banks, employers, and universities. School children are denied meals if their parents’ immigration status doesn’t comply. Schools have to share pupils’ country of birth with the Department of Education, who in turn share the information with the Home Office.

Immigration policy has moved from face-to-face contact on a per-case basis to catching people out, fragmenting communities and making people feel more and more unsafe.

Immigration policies are now on the warped path of an anti-immigrant culture. Destroying landing cards, leading to limbos for many who had been in the UK for years and even decade, was far from a mistake — it was a calculation. Systems of monitoring and investigation, to contain people, are being institutionalized.

The support organization for European Union citizens in the UK, the 3 Million, has warned that a reckless policy will lead to another Windrush situation. The bureaucratic systems in place for EU citizens to achieve “settled” status point to another disaster.

Classing people as merely visitors rather than residents and building a culture which sees foreigners as aliens is ingrained in these institutional processes. Nicholas Hatton, who arrived in Britain 25 years ago, laments what will come if the law is not clearly set out for European residents post-Brexit:

The Windrush scandal obviously crystallized our concerns — 20, 30, 40 years down the line, when all these politicians and their promises are gone, what will be left is the law.”

Echoes of “Not Your Home”

Perhaps, the scariest message to come out of the Windrush Scandal is also its strongest. Even if you have been living in the UK for 60 years, paying taxes, raising a family, having a job — that is not enough. All British residents are equal, but some are more equal than others.

A new Government is in place, led by a Boris Johnson who has said, “You’ve seen quite a large of people coming in from the EU – 580 million population – able to treat the UK as though it’s basically part of their own country.”

For Johnson, it is irrelevant how long one has been living in the UK: if you are of foreign origin, then this is never your home.

Maike Bohn is a German national and co-founder of the 3 Million. Johnson’s statement caused her personal anguish, as she saw her friends in tears. QUOTE?

Professor Tanja Bueltmann campaigns for migrant rights. In a video after the election, she spoke of the messages of anxiety and despair about what the future holds for EU citizens.

The victory of the Conservatives comes on the back of four weeks of sustained and truly shameful xenophobic dog whistling against us….

[Boris Johnson must] finally do the right thing…treat EU citizens at home in the UK with respect.”

The Government proposes an Australian-style points system for immigration. It is proposing the creation of a department for immigration, separate from the Home Office.

Some experts say there is potential for a fairer and more attentive process. But others, including Bueltmann, see the opportunity to increase the structural power of the Hostile Environment. The director of the Runnymede Trust [NAME?] said the culture of such a department will be driven by the targets that echo the rhetoric of the Home Office from when Theresa May was in charge.

They used us to help them win their referendum. It worked. So they’re carrying on targeting us….I’ve honestly never felt so excluded by Britain’s political class, and I came here in the early days of Margaret Thatcher. We’ve gone backwards.

In post-election, “Brexit” UK, the Windrush Scandal is a chastening reminder of what happens when people are dehumanized and replaced by targets.

In the case of Hubert Howard, the weight of bureaucratic indecency says it all. He battled 13 years to achieve citizenship, repeatedly blocked until the press featured his case. Then it was resolved in 45 minutes.

Leaving the immigration bureau in tears, he stated, “It has been a struggle and it’s destroyed my life.”

For many others, the hostile environment portends more struggles.

And quite likely, more destroyed lives.