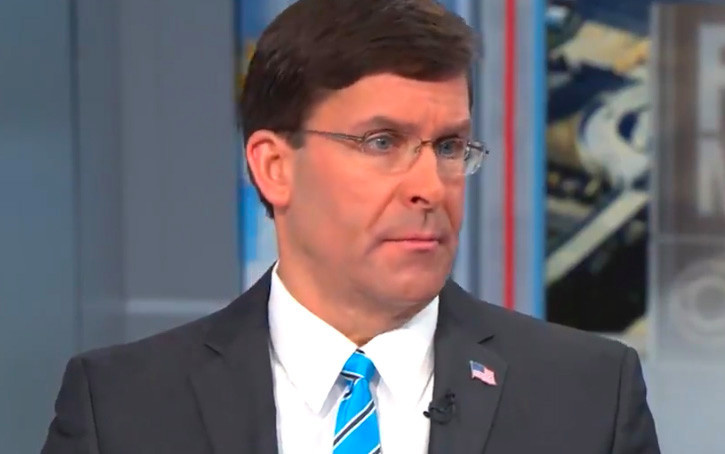 Defense Secretary Mark Esper (pictured) undmrmines Donald Trump and other officials, such as Secretary of State Mike Pompeo, over the US assassination of Iran’s top commander Maj. Gen. Qassem Soleimani.

Esper said in a TV interview on Sunday that he never saw any evidence of an “imminent” Iranian attack on four US embassies, as Trump asserted on Friday.

“I didn’t see one [assessment] with regard to four embassies,” the Defense Secretary told CBS’s Face the Nation.

Soleimani, the leader of Iran’s elite Quds Force which carries out operations outside the Islamic Republic, and the leader of an Iran-supported Iraqi militia were killed by US drones outside Baghdad International Airport on January 3.

Secretary of State Mike Pompeo, who led the push for the assassination, has repeated said that Soleimani — — was planning “imminent” assaults..

The message was central in convincing Trump to act. After the supporters of the Iran-backed Iraqi militias raided the US Embassy compound in Baghdad on December 31, officials told Trump that he might face a “Benghazi” — the 2012 attack on the US Consulate in Libya’s second city which killed four Americans including Ambassador Christopher Stevens — if he did not act.

Pompeo and other US officials have failed to produce any evidence supporting their claims.

Several US officials have said that while they saw a worrying pattern in Soleimani’s action, they did not have enough information to describe the threat as “imminent”. A State Department official privately said that it was a mistake for Secretary of State Mike Pompeo to use the word, as it suggested a specific situation that was not borne out by the intelligence.

After his admission that he had seen no information pointing to an “imminent” attack, Esper tried to cover for Trump: “I share the President’s view that probably — my expectation was they were going to go after our embassies. The embassies are the most prominent display of American presence in a country.”

The Defense Secretary insisted, “We are safer today then we were just a few weeks ago”, repeating the Administration’s mantra that Soleimani was “the world’s foremost terrorist leader…who had the blood of hundreds of Americans on his hands”.

Esper confirmed that the Administration saw Wednesday’s firing of missiles by Iran on two Iraqi bases, which caused no casualties, as a step back from military confrontation: “We do not expect any further attacks.”

The Trump Administration did not consult leading members of Congress, the “Gang of Eight”, or US allies before the drone strikes that killed Soleimani as he arrived in Baghdad from Damascus.

The commander led Iran’s effort to prop up the Assad regime amid the Syrian uprising since 2011, and Tehran’s support of Iraq’s Popular Mobilization Forces, created in 2014 after the Islamic State quickly captured 1/3 of the country.

Look, it’s always difficult, even with the exquisite intelligence that we have, to know exactly what the targets are. We knew there were threats to American facilities, now whether they were bases, embassies — you know it’s always hard until the attack happens.

He maintained, “We had very strong intelligence.”

Legislators denounced an Administration briefing last week as one of the “worst” they had ever had. Sen. Mike Lee, a fervent supporter of the Administration, has broken with it over the description of the Iran threat.

Lee said on Sunday, that he is worried about the quality of the intelligence and had not “been able to yet ascertain specific details of the imminence of the attack”:

I believe that the briefers and the president believed that they had a basis for concluding that there was an imminent attack, I don’t doubt that, but it is frustrating to be told that and not get the details behind it.

House Speaker Nancy Pelosi said, “I don’t think the administration has been straight with the Congress of the United States.”

Rep. Adam Schiff, the chair of the House Intelligence Committee, assessed, “Frankly, I think what they are doing is overstating and exaggerating what the intelligence shows.”