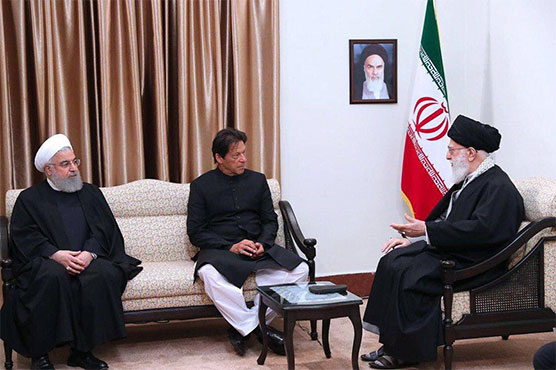 On January 3, after the US assassination of its top military commander Maj. Gen. Qassem Soleimani, Iran raised the red flag over the Jamkaran Mosque located in the holy city of Qom. It was the first time in the history of the Islamic Republic that the symbol of vengeance flew over its holiest sites.

Five days later, to fulfill the Supreme Leader’s pledge of “crushing revenge”, Iranian missiles struck two Iraqi bases with US personnel. But the strikes were calibrated, with advance warning through the Iraqi Prime Minister, to ensure there were no casualties. Donald Trump could declare that Iran was “standing down” from military confrontation. But Tehran assured that the revenge on the US would continue through political maneuvers, notably the effort at expulsion of American forces from Iraq and throughout the Middle East.

So how does Pakistan, carving out a foreign policy under Imran Khan’s government with all regional powers and trying to deal with economic challenge, balance between its relationship with the US and its links with Iran?

Foreign Minister Mahmood Qureshi responded to US Secretary of State Mike Pompeo by distancing Islamabad from any confrontation: “Pakistan would neither let its soil be used against any other State nor become part of any regional conflict”.

The quick reply showed Pakistan’s conspicuous attempt to maintain its neutral position in the US-Iran tension as well its strategic and diplomatic ties with its neighboring states such as Afghanistan. Since the 1980s, tension along the 909 km (514 mile) border with Iran — including Baloch insurgents attacking Iranian security forces — disturbed Islamabad’s relations with Tehran.

There is an ongoing conflict and politics in the two countries’ mutual neighbor, Afghanistan. More than 18 years after the US-led operations to remove the Taliban from Kabul, the US, Pakistan, and Iran are all involved in initiatives which could lead to negotiations between the Kabul Government and the Taliban — or which could collapse as insurgency and killings continue.

While Pakistan’s ties with Afghanistan had never been smooth, the likelihood of Afghanistan falling between the Scylla and Charybdis cannot be rooted out if Iran chooses to settle its scores with the US in Kabul. As Iran today is on better terms with Taliban that it was prior to 2002, it could support the insurgent group, which still has close to 8,000 US troops in the region.

Pakistan’s historic relations with the Taliban brought India close to Iran, unsettling Islamabad. Meanwhile, in 2018 the kidnapping of Iranian security personnel along the border with Pakistan’s Balochistan threatened conflict between Tehran and Islamabad.

But, perhaps ironically, the Trump Administration’s “maximum pressure” on Iran has spurred reconciliation between the Rouhani and Khan Governments.

When India stopped buying oil from Iran, after US sanctions waivers expired in May, Iranian Foreign Minister Javad Zarif offered to connect Iran’s Chabahar port — which had been developed with Indian investment — with Pakistan’s Gwadar port, backed by Chinese and Saudi money.

In October, Khan paid a high-profile visit to Tehran, including an audience with the Supreme Leader, with the headline of discussions to defuse US-Iran tensions. The talks also allowed the Prime Minister to bring together the other issues: border security, the Afghanistan talks, and the benefits to both countries of economic links amid US sanctions.

See also Pakistan’s Leap of Faith: An Offer to Iran

Pakistan is also keen for the resumption of military assistance, suspended from May 2018. Pakistan officers have been excluded from the International Military Education and Training initiative, and removed from programs at the US Naval War College, Naval Staff College, and courses including cyber-security studies.

Hours after Soleimani’s assassination, Washington lifted the block on Pakistan’s involvement in the International Military Education and Training program, implementing a decision taken in December.

Navigating The Conflict Ahead

Chief of Army Staff Bajwa has reiterated Pakistan’s position of the need for maximum restraint and constructive engagement to ensure military de-escalation.

But while the immediate crisis appears to have been averted, Trump’s muddled speech on Wednesday — mixing threats to the Iranian regime and an offer of discussion — and the hostility of the Supreme Leader to the US Government could always restore conflict.

US Secretary of State Mike Pompeo proclaimed, after talking with Bajwa, that they had spoken about American “defensive action” in the assassination of Soleimaini, confronting Tehran’s “destabilizing” actions.

But if Pakistan is keeping channels open with the US, it is also looking for other paths to navigate the conflict. On Wednesday, the Prime Minister signaled Islamabad taking the diplomatic initiative:

I have asked FM Qureshi to visit Iran, KSA & USA to meet with respective foreign ministers, Secretary of State; & COAS Gen Bajwa to contact relevant military leaders to convey a clear message: Pakistan is ready to play it's role for peace but it can never again be part of any war

By Friday, Foreign Minister Qureshi was speaking with Russian counterpart Sergey Lavrov about the situation. Hours later, Islamabad announced that Qureshi will go to Tehran as Pakistan and Russia pursue a mediating role.

Through US-Iran conflict, the Pakistani Government has found an issue which connects its interests: Afghanistan, military assistance, links to deal with economic challenges, and even the always-fraught relationship with India. Imran Khan, who has pursued an assertive foreign policy ever since he took office, sees the opportunity to gain advantage in all those areas. But with a conflict that could always escalate, will the move pay off?