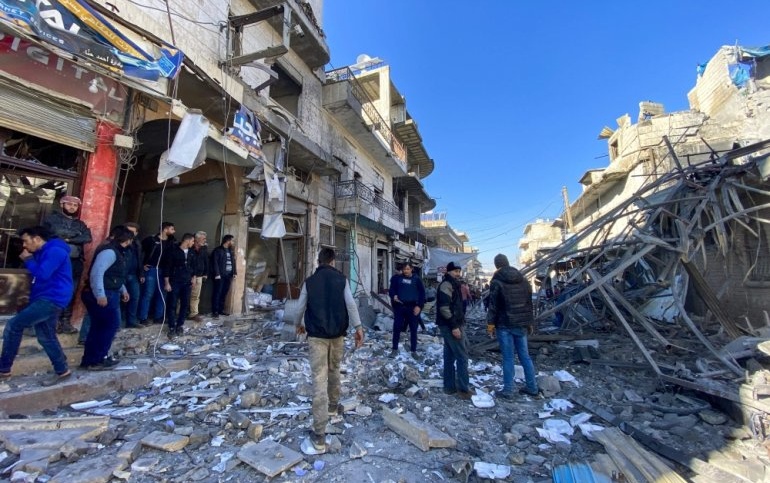 Residents of opposition-held Idlib Province in northwest Syria said Russia halted airstrikes on Sunday as Moscow and Turkey declared a ceasefire after a nine-month Russian-regime offensive to overrun the area.

Turkey’s Defense Ministry said the situation was calm “except for one or two separate incidents”.

But local sources in Idlib said they expected the Russian-regime assault to resume soon. They noted that pro-Assad forces are massing on frontlines and regime helicopters are dropping leaflets calling on civilians to surrender and evacuate parts of Idlib.

Witnesses said that, despite the ceasefire, the regime shelled at least a dozen towns. White Helmets rescuers warned that “Idlib is on the verge of a humanitarian catastrophe”, with the “ghost city” of Ma’arat al-Num’an — emptied of its 70,000 residents last month — among Sunday’s targets.

“Aerial bombing stopped but many towns and villages continued to be targeted by artillery rounds,” activist Mohamad Rashid said.

Despite the truce declared by the guarantor parties #Russia and #Turkey, the regime forces continued yesterday their bombing on the cities of northern #Syria, targeting 15 regions, with more than 138 artillery shells, 10 rocket launchers, without recording any casualties. pic.twitter.com/EwyMOnG77s

Russia and the Assad regime launched the offensive to retake the opposition area, the last in Syria, shattering a “de-escalation zone” around Idlib and northern Hama Province which was announced by Moscow and Ankara in September 2018.

The offensive has killed almost 1,200 civilians, wounded thousands, and displaced more than 600,000. Russia and the regime have seized almost all of northern Hama and part of southern Idlib, with Turkey unable to check the assault and the advance.

Russian President Vladimir Putin declared a pause in operations in early September, but they resumed with even greater intensity in November. Within two weeks in December, more than 235,000 people fled the area in and near the city of Ma’arat al-Num’an.

On Saturday, pro-Assad airstrikes killed at least 20 people and wounded more than 40 in strikes on four towns and cities in Idlib.

"Please take me out, please" calls from a terrified mother who was buried with her children under the rubble of their home after the regime raids yesterday on Neirab village, in #Idlib. 5 people were killed. The mother and her children were rescued alive by our White Helmets. pic.twitter.com/QKesiYVy2s

The Syrian army said on Sunday that insurgent rockets had killed two people during shelling of residential areas in Aleppo city. Rebels and witnesses said that at least a dozen towns were hit by artillery bombing from army posts.

“Aerial bombing stopped but many towns and villages continued to be targeted by artillery rounds,” Mohamad Rashid, an activist said.

Rebels said pro-government forces were massing on the front lines and army helicopters had dropped leaflets calling on civilians to surrender and evacuate rebel-held areas.