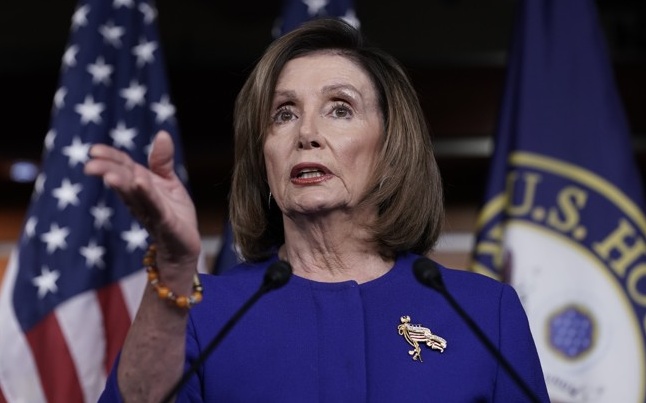 House Speaker Nancy Pelosi will send the articles of impeachment against Donald Trump to the Senate next week.

Pelosi told Democrat legislators on Friday that, despite the refusal of Senate Majority Leader Mitch McConnell to allow witnesses and documents, she will ensure the trial can proceed: “I have asked Judiciary Committee Chairman Jerry Nadler to be prepared to bring to the floor next week a resolution to appoint managers and transmit articles of impeachment to the Senate.”

McConnell has said that he is abandoning the Constitutional obligation to be an “impartial juror” and will work with the White House to ensure Trump is not convicted.

The Majority Leader has refused to permit witnesses such White House Chief of Staff Mick Mulvaney; Mulvaney’s aide Robert Blair; Michael Duffey, the top political appointee at the Office of Management and Budget; and former National Security Advisor John Bolton — all of whom have first-hand knowledge of Trump’s freeze on military aid until Ukraine announced investigations to tarnish Presidential candidate Joe Biden and cover up Russia’s involvement in the 2016 US election.

On Thursday, Pelosi tried a final time to get a commitment to witnesses: “We want to say what [the Republican leadership] are willing to do, and the manner in which they will do it.”

But McConnell would not budge, jabbing that Democrats were “too embarrassed” to proceed — a remark that brought Pelosi’s firm challenge: “Documents, documentation, witnesses, facts, truth: that’s what they’re afraid of.”

Yesterday Pelosi suggested a timetable in which the Senate trial could begin on Wednesday. She said, in an implicit reference to McConnell’s all-in commitment to the White House:

Trump has been charged with abuse of power over his attempts, in a 10-month campaign led by his personal attorney Rudy Giuliani, to get the Ukrainian announcement of investigations. He is also charged with obstruction of Congress over White House orders to officials — including Mulvaney, Duffey, and Blair — not to comply with subpoenas from House committees.

Despite the orders, 17 current and former US officials testified to the Trump-Giuliani campaign as an “irregular channel of foreign policy” threatening both American and Ukrainian security.