TrumpWatch, Day 1,082: Confusion and Pushback on Trump Over Iraq and Iran 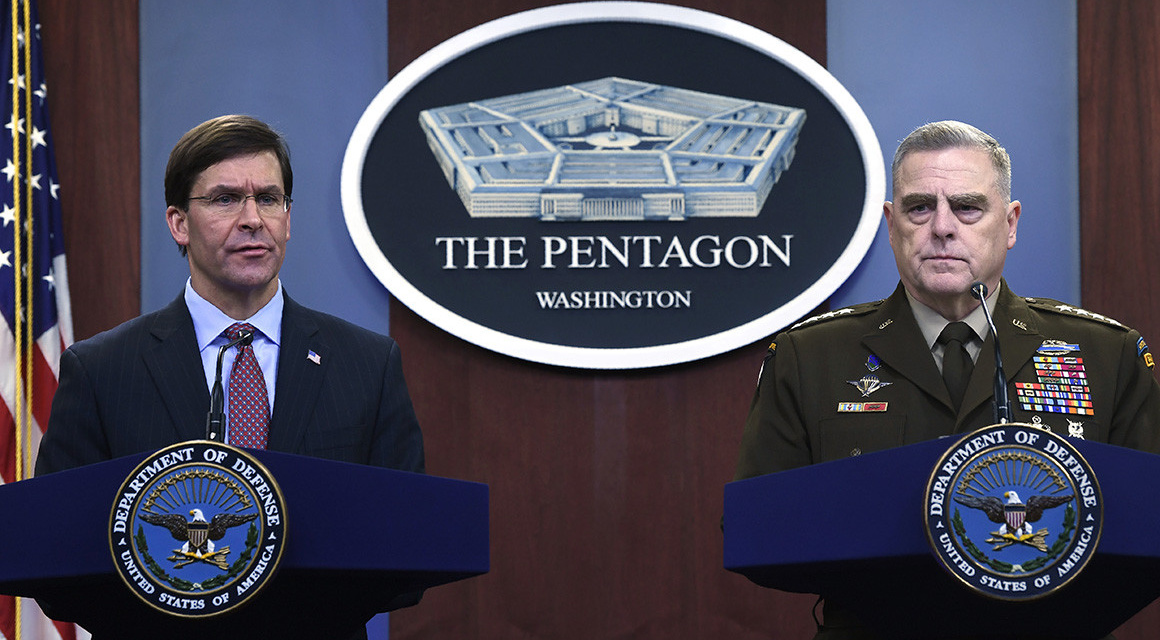 The Trump Administration falls into confusion over its next steps, four days after the US assassination of top Iranian commander Maj. Gen. Qassem Soleimani.

Defense Secretary Mark Esper and the chairman of the Joint Chiefs of Staff, Gen. Mark A. Milley, were forced into a quick denial after an official Defense Department letter said the US is “repositioning forces” for “movement out of Iraq”.

The letter was from Marine Corps Brig. Gen. William Seely, the commanding general of the US forces in Iraq, and addressed to Iraq’s Defense Ministry.

In a hastily-called news conference, the two men denied any withdrawal, two days after the Iraqi Parliament demanded the expulsion of American troops.

“It was an honest mistake,” Milley said. “That letter is a draft, it was a mistake, it was unsigned, it should not have been released.”

Esper asserted, “There’s been no decision made to leave Iraq, period. There is no decision to leave, nor did we issue any plans to leave.”

Meanwhile, the Defense Secretary pushed back against Donald Trump’s Twitter threat to bomb Iranian cultural sites if Tehran targeted US positions and personnel.

“We will follow the laws of armed conflict,” Esper assured, following international criticism of Trump’s assertion.

See also EA on BBC: How Is Iran Responding to Assassination of Gen. Soleimani?

Esper said the US military is “moving forces around” to consolidate positions, including the redeployment of personnel who had been based in Kuwait.

The Defense Secretary repeated standard lines that the US wants Tehran to de-escalate the situation, “but if Iran chooses to go the other path, we are prepared to deal with that and will respond forcefully.” He cited the reasons for the killing of Soleimani and the head of the Iran-supported Iraqi militia Kata’ib Hezbollah: the December 27 rocket attack by Kata’ib Hezbollah which killed a US contractor and wounded four troops, and a raid on the US Embassy compound in Baghdad after American missiles killed 25 militia and wounded 51.

Both Esper and Milley defended the killing fof Soleimani. The Defense Secretary said, “He has the blood of hundreds of Americans; he’s wounded thousands of American coalition partners. He is a terrorist, a leader of a terrorist organization who’s been killing and attacking Americans for 20-some years, and the blood is on his hands.”

The general added, “We would have been culpably negligent to the American people had we not made the decision we made.”

But Esper implicitly distanced himself from Trump’s position by responding to criticism that the Administration did not consult any allies or Congress before the assassination and trying to shift the focus from confrontation with Iran:

“Over the last several days, I’ve had many conversations with our partners and allies about the situation in Iraq and the region.

It’s been uniform support for our position and our actions, and I continue to convey to them the importance we continue to place on the defeat-ISIS [Islamic State] position.

Esper’s effective rebuke of Trump was a response to Trump’s Twitter threat on Saturday to target “52 Iranian sites (representing the 52 American hostages taken by Iran many years ago), some at a very high level & important to Iran & the Iranian culture, and those targets, and Iran itself, WILL BE HIT VERY FAST AND VERY HARD”.

Trump followed with a statement to reporters on Sunday that Iran could not “kill our people” while “we’re not allowed to touch their cultural sites”: “It doesn’t work that way.”

Even Trump’s Congressional allies rejected the warning. His close friend Sen. Lindsey Graham said, “We’re not at war with the culture of the Iranian people. We’re in a conflict with the theology, the ayatollah and his way of doing business.”

Democrat Sen. Jack Reed, a former Army platoon leader, said Trump’s threats would open the way for other leaders to attack cultural sites: “America is better than that, and President Trump is flat-out wrong to threaten attacks on historic places of cultural heritage. Destroying some of these culturally significant Iranian sites wouldn’t be seen as just an attack against the regime in Tehran, it could be construed as an attack on history and humanity.”

UK Prime Minister Boris Johnson, reportedly angered at the lack of an American message before the assassination, used his first public statement on the crisis to chide the targeting of antiquities.

Trump’s inner circle responded by saying that Trump hadn’t said what he said. White House counsellor Kellyanne Conway maintained, “He didn’t say he’s targeting cultural sites. He said that he was openly asking the question why in the world they’re allowed to maim people, put out roadside bombs, kill our people, torture our people.”