TrumpWatch, Day 1,077: Trump Vacations Amid Threat to US Embassy in Iraq 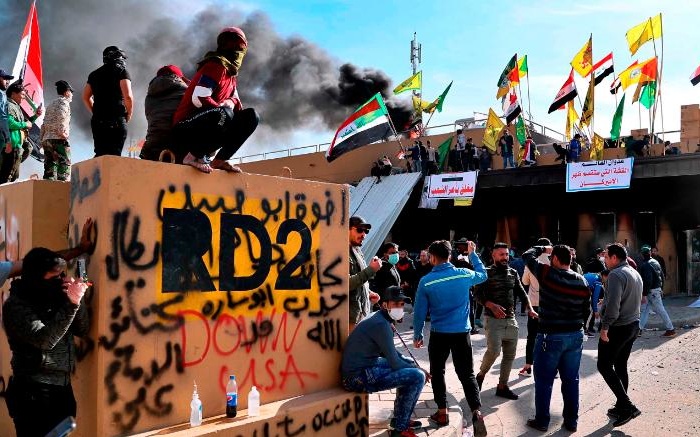 Supporters of an Iran-backed militia set a fire during a sit-in in front of the US Embassy in Baghdad, Iraq, January 1, 2020 (Khalid Mohammed/AP)

Donald Trump has a Twitter-filled vacation in Florida as his officials consider the response to an attack on the US Embassy in Iraq.

On Tuesday supporters of the Iran-backed, Iraq-based Kata’ib Hezbollah militia entered the heavily-protected Green Zone in Iraq’s capital Baghdad. They broke into the US Embassy compound and set fires. The demonstrators withdrew but then joined thousands chanting “Death to America”, throwing rocks, and covering walls with graffiti.

The demonstration was sparked by Sunday’s US airstrikes on five Kata’ib Hezbollah sites, three in Iraq and two in Syria. The US military said the militia had been carrying out rocket attacks on American troops in Iraq, with a US contractor killed and four American troops wounded last Friday near Kirkuk.

Iraq’s Popular Mobilization Units, which include Katai’ib Hezbollah, said at least 25 fighters were killed and 51 wounded.

On Wednesday night, the militia supporters pulled back from the entrance to the Embassy compound, after a day after throwing rocks and trying to set fire to walls and security booths. Iraqi security forces responded with tear gas and rubber bullets.

“We have issued the order for everyone to withdraw, because America should have received our message,” said a Kata’ib Hezbollah spokesman.

Trump’s sole contribution to the episode was a tweet on Tuesday: “Iran will be held fully responsible for lives lost, or damage incurred, at any of our facilities. They will pay a very BIG PRICE! This is not a Warning, it is a Threat. Happy New Year!”

Iran’s Supreme Leader responded on Wednesday with a series of message denouncing Sunday’s US strikes and responding to “that guy”:

1st: You can’t do anything. 2nd: If you were logical — which you’re not— you’d see that your crimes in Iraq, Afghanistan… have made nations hate you.

Ayatollah Khamenei repeated the false claim that Washington “created” the Islamic State, said the US strikes were revenge on Kata’ib Hezbollah and the Popular Mobilization Units for defeating ISIS.

If the Islamic Republic decides to challenge & fight, it will do so unequivocally. We’re not after wars, but we strongly defend the Iranian nation’s interests, dignity, & glory.

If anyone threatens that, we will unhesitatingly confront & strike them.

More US Troops to Middle East

Trump, who is at his Mar-a-Lago for more than two weeks, spent Wednesday retweeting messages from his social media director Dan Scavino — “Americans Are Winning” — Republican activists, and Twitter accounts such as @HeatherJones33. He insulted CNN and continued to rail against his impeachment and imminent trial.

In his only references to the Iraq situation, Trump tried to claim a victory by insisting that he had prevented another “Benghazi”: the September 2012 attack on the US Consulate in Benghazi, Libya which killed four Americans, including Ambassador Christopher Stevens.

Meanwhile, US officials were implementing a response to the challenge in Baghdad. Defense Secretary Mark Esper said about 750 troops will be sent soon to the Middle East.

“his deployment is an appropriate and precautionary action taken in response to increased threat levels against US personnel and facilities, such as we witnessed in Baghdad today. The United States will protect our people and interests anywhere they are found around the world.

Kata’ib Hezbollah spokesman Mohammad Mouhiye said this week’s events were only the start of the contest with the US.

The American Administration should understand the following: the first step was to protest near the American embassy, we are waiting their reactions to determine the second step.

First, close the doors of the evil embassy, which we consider a spy building and an operations room to administer and sabotage Iraq’s well-being. We also call on the US to withdraw their military forces which are in Iraq illegally.