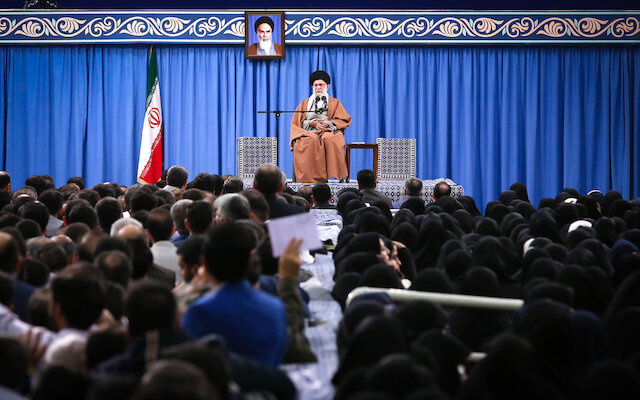 Iran’s Supreme Leader notes the “economic demands” of Iranians during November’s mass protests but puts them behind his presentation of a “sedition” created by foreign actors.

Ayatollah Khamenei issued the statement to an audience of nurses in Tehran on Wednesday. He pointed used “sedition”, the regime label for mass demonstrations in 2009 against the disputed Presidential election, to justify the repression of the protests.

People have economic demands, mostly rightful ones. In the events of November, people had demands but the enemy had prepared agents to cause sedition. It used the opportunity to harm the country. With their insight and astuteness, people withdrew and the seditionists were left alone.

The protests were sparked on November 15 by the Government’s midnight announcement of a 50% to 200% rise in petrol prices. They were initially peaceful, with motorists parking their cars on highways, but security forces soon tried to disperse them. In the ensuring confrontation, hundreds of banks — a target of anger because of corruption and loss of personal savings — and Government buildings were burnt.

Khamenei did not mention the killings on Wednesday. Instead, he maintained his line of foreign instigation of violence:

Those who abuse people’s demands, attack fuel and wheat warehouses to set them on fire and destroy infrastructures, which belong to the people, some of them may do this based on emotions. But, the main orchestrators are linked to foreign intelligence services.

The Iranian economy has been beset for years by internal issues and US sanctions. Productivity, employment, and trade have been crippled. Inflation is at 40% per year, and the currency is at a historically-weak level.

With official oil exports down 80% to 95% since spring 2018, the Government is struggling to fund its budget. The Supreme Leader’s declaration of a self-sufficient “Resistance Economy” has been further challenged by a 14% fall in non-oil exports.