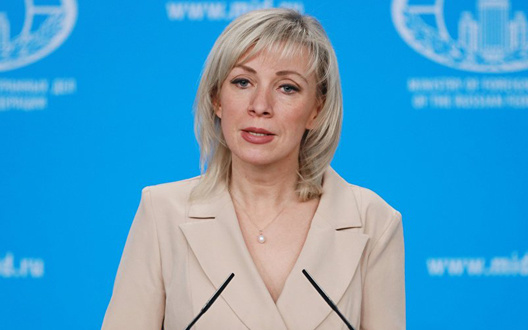 Russia has pressed again for the removal of 13,000 displaced civilians from the Rukban camp in southeast Syria, despite the residents’ concerns about return to regime-held areas.

Foreign Ministry Spokeswoman Maria Zakharova (pictured) put out the message on Thursday, in the guise of blaming the “US occupation” and “terrorists” for a 15-month Russian-Assad regime siege seeking the removals.

Without any evidence, Zakharova asserted that American troops and anti-Assad fighters are holding the residents against their will.

#Zakharova: Tensions remain in the area occupied by the #US around Al-Tanf. The @UN plan to evacuate the remaining residents of the #Rukban camp has been delayed for almost 5 months, due to the #US and US-controlled militants refusing to provide the necessary security guarantees. pic.twitter.com/Xi7fgnWfQc

Her statement was prompted by the UN’s indication that it is not carrying out any transfers in the near future, amid concerns that residents are harassed, intimidated, and detained when they are back in regime-held Homs Province.

The Assad regime cut off Rukban, in a barren area near the Jordanian border, in October 2018. Damascus has only allowed three convoys of aid in the past two years.

Zakharova implied that the siege would continue, again trying to shift blame to the Americans and the anti-Assad fighters: “This problem cannot be solved by sending humanitarian convoys only, especially as aid doesn’t reach the displaced persons, rather it remains at the hands of militants.”

She pressed on with the claim that residents who left would be well-treated: “The displaced citizens receive all the humanitarian and health support upon leaving al-Tanf area into lands under the control of the Syrian Government.”

In UN surveys, more than 90% of those in the camp say they wish to return to home areas, but almost all fear detentions, forced conscription, and harassment by the regime. The Rukban camp council have called on the UN to ensure transfers to opposition-held northwest Syria, rather than regime-held Homs, but have had no success.

Last month the regime seized 174 of Rukban’s men who were forced to return to Homs Province. The Syrian Association for Citizen’s Dignity issued a statement that the men were taken from shelters and “transferred to ‘terrorism courts’, despite having previously received security clearances from the regime”.

Local sources in Rukban confirmed to EA that the men were being taken away for interrogation, detention, and court appearances. They cited calls from families in Homs, denied visits with their relatives.