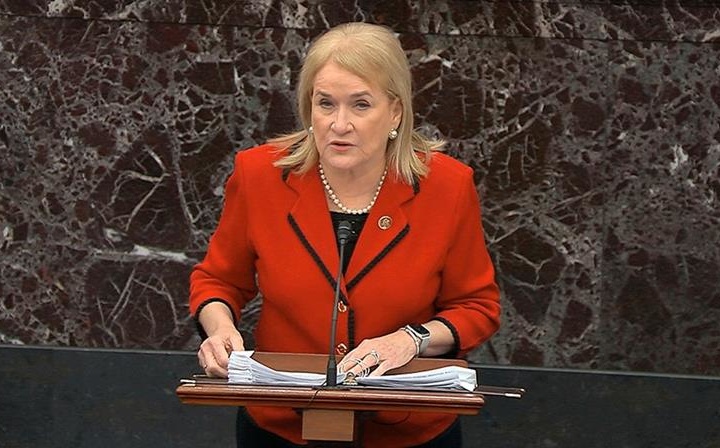 In the second day of their presentation, House managers build the case for Donald Trump’s conviction in his impeachment trial on charges of abuse of power and obstruction of Congress.

Rep. Adam Schiff, the lead manager, concluded after another eight hours of evidence and appeal to the Constitution rather than politics:

Most of the Senate’s 53 Republicans are thought to back Trump against conviction, irrespective of the weight of the evidence. But the House managers are hoping that four will join Democrats to ensure that Senate Majority Leader Mitch McConnell cannot block documents and witnesses with first-hand knowledge of Trump’s pressure on Ukraine for investigations to tarnish Presidential candidate Joe Biden and cover up Russia’s involvement in the 2016 US elections.

The witnesses include former National Security Advisor John Bolton; White House Chief of Staff Mick Mulvaney and his chief aide Robert Blair; and Michael Duffey, the top political appointee at the Office of Management and Budget. Mulvaney, Blair, and Duffey — who implemented Trump’s order to freeze $391 million in Ukraine security assistance — have been ordered by the White House to defy subpoenas.

Schiff summarized the 10-month campaign by Trump and his personal attorney Rudy Giuliani for the investigations, bringing together the 17 former and current US officials who testified of an “irregular foreign policy” threatening US and Ukraine national security:

“You Can’t Trust This President”

Schiff and the other six managers pre-empted arguments by Trump’s attorneys, which begin on Saturday.

Using Trump’s words, they swept aside the argument that he was only seeking to deal with corruption in Ukraine. They detailed how, to achieve Trump’s personal goals, he and Giuliani spread disinformation against US Ambassador to Kyiv Marie Yovanovitch — a diplomat praised for her anti-corruption efforts — and recalled her from Ukraine in April 2019.

The managers also sought to defuse the Trump’s camp shift of focus to Biden and his son Hunter, a board member with the Ukrainian gas company Burisma.

Trump and his supporters have invested much of their effort into the false assertion that Joe Biden pursued the firing of Ukraine Prosecutor General Viktor Shokin in March 2016 to protect his son. In fact, Shokin was dismissed by the Ukrainian Parliament for failure to pursue corruption inquiries.

The president has confirmed what he wanted in his own words. He has made it clear he didn’t care about corruption, he cared only about himself. Now it is up to us to do something about it, to make sure that a President, that this president, cannot pursue an objective that places himself above our country.

Rather than rebuffing the evidence and arguemnts, Trump’s personal attorney Jay Sekulow insisted that the Bidens must be called as witnesses. GOP Sen. Josh Hawley, a fervent Trump defender, said, “If we’re going to call witnesses, it’s now clear we absolutely must call Hunter Biden, and we probably need to call Joe Biden.”

A Handful of Key Republicans

The House managers drove home the evidence over Trump’s freeze of security assistance until Ukraine announced the investigations, a suspension which the Government Accountability found was illegal last week.

President Trump exploited our ally, Ukraine, for his own political benefit to the detriment of American national security. Is that conduct impeachable? The answer is categorically yes.

But some Republican Senators appeared to shut down any consideration, despite taking the Constitutional oath to be attentive, impartial jurors. Rand Paul did crossword puzzles and doodled a picture of the US Capitol. Thom Tillis left his seat and went to the third-floor visitors’ gallery.

Sen. Roy Blunt dismissed the 16 hours of evidence and argument so far: “They spent a lot of time, they’re well prepared — I just don’t think they have much to work with. They’ve got about a one-hour presentation.”

But the House managers, who complete their presentation Friday, centered on the handful of Republicans who could open up the trial to a full examination of Trump’s behavior and actions. They include But Mitt Romney, Cory Gardner, Lisa Murkowski , Lamar Alexander, and Susan Collins.

In contrast to some of their colleagues, Murkowski and Collins were studiously taking notes at their desks on Thursday.

House manager Rep. Jerry Nadler drew on Thomas Jefferson, Alexander Hamilton, and George Washington to assess, “No President has ever used his office to compel a foreign nation to help him cheat in our elections….Impeachment is the Constitution’s final answer to a president who mistakes himself for a king.”

Donald Trump, who flew to Florida on Thursday, spent his Twitter day bemoaning “Shifty Schiff”. In a bold deception, he used his orders to officials to defy House subpoenas — part of the charge of obstruction of Congress — to allege Democrat duplicity:

The Democrat House would not give us lawyers, or not one witness, but now demand that the Republican Senate produce the witnesses that the House never sought, or even asked for?