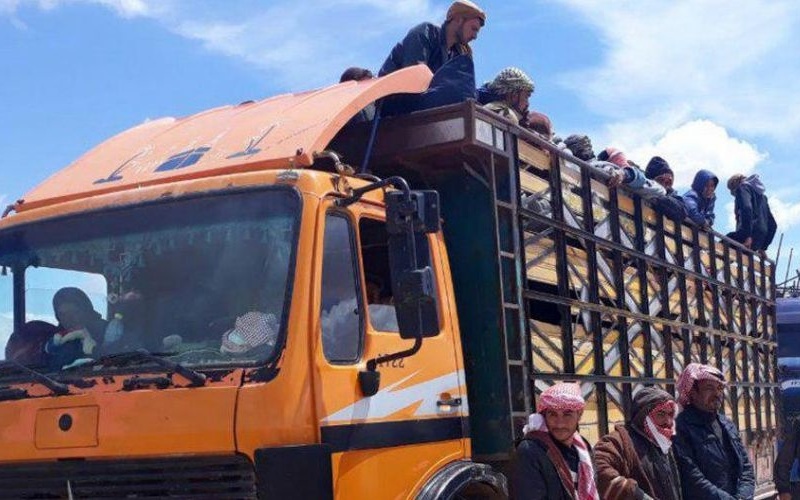 A leading Syrian activist group reports that the Assad regime seized 174 of the men who were forced out of the Rukban displaced persons’ camp in southeast Syria.

The Syrian Association for Citizen’s Dignity issued a statement on Saturday that the men were taken from shelters in Homs and “transferred to ‘terrorism courts’, despite having previously received security clearances from the regime”.

Local sources in Rukban confirmed to EA last week that the men were being taken away for interrogation, detention, and court appearances. They cited calls from families in Homs, denied visits with their relatives.

The SACD said the men, 16 of whom were named with the permission of familieis, fell into two categories:

*Youth who never reported for compulsory military service. They were sent to prison in Adra, north of Damascus, or to the Homs Central Prison.

Most of those seized originally came from Palmyra city or eastern Homs Province.

The activists emphasized that all of the men had been given guarantees and commitments from the regime and the Russian military Russian allies they could reach a “personal settlement” protecting them from persecution and forced conscription.

“Russia must be held accountable to explain why the arrests were possible, despite the security guarantees received by those arrested,” the SACD summarized.

SACD has repeatedly warned about the dangers facing those forced to return from Rukban under Russian guarantees. We issued detailed, documented reports about the targeting of Rukban returnees by Assad’s security apparatus. 10/ https://t.co/P7uc4awK4q

Assad regime forces cut off the main route into Rukban in October 2018, leading to shortages of food, medicine, and vital supplies. Damascus has allowed only three UN aid convoys into the camp since January 2018. Activists and residents that even this assistance has been curbed by regime forces refusing or confiscating vital supplies.

In UN surveys, more than 90% of those in the camp say they wish to return to home areas, but almost all fear detentions, forced conscription, and harassment by the regime. The Rukban camp council have called on the UN to ensure transfers to opposition-held northwest Syria, rather than regime-held Homs, but have had no success.

Syria Daily, May 3: More Departures from Rukban Camp — and More Claims of Disappearances

The SACD repeated the call on the UN to take action to prevent the detentions, avoid forced transfers, and possibly save lives:

The UN must ensure they have a full and ongoing access to the “IDP shelters” in Homs to document and report on the status of the people kept there.

The UN must find out the circumstances of all arrests of returnees from these “IDP shelters” and promptly report to the all relevant international bodies, as well as provide appropriate information to Rukban residents to inform their decisions.

All parties involved in the evacuations from Rukban must increase aid to camp residents, find a third location for evacuation of those that don't wish to return to Homs, and pause evacuations until UN's ongoing access to returnees and protection guarantees can be confirmed. 15/15