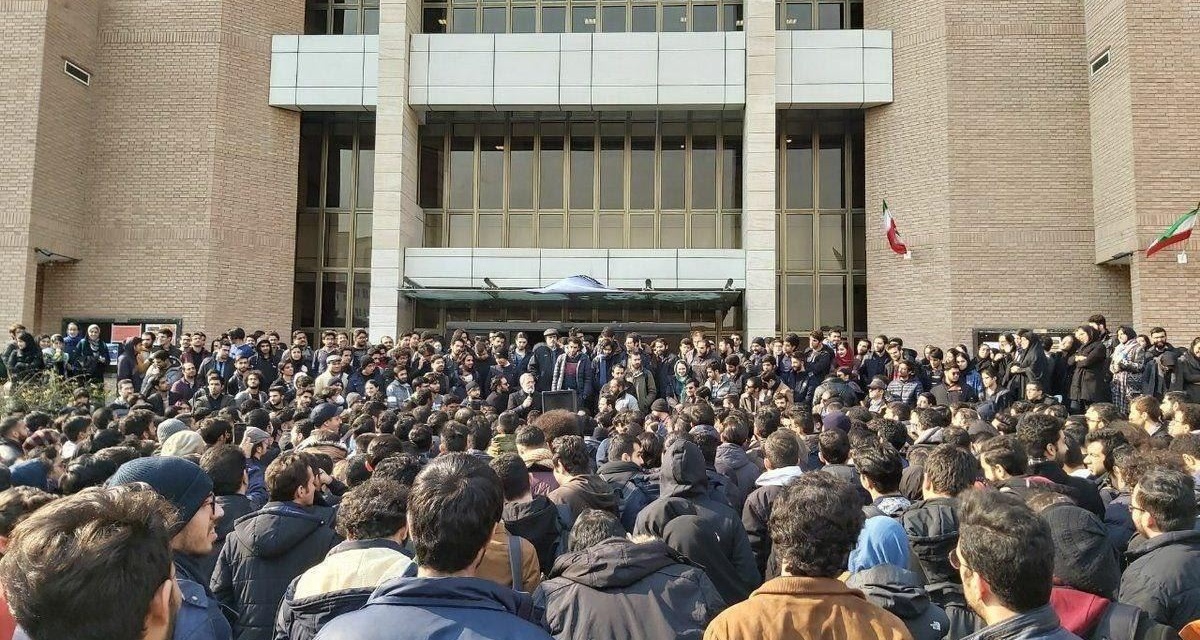 The November protests provoked an unprecedented state crackdown that killed hundreds of people — the deadliest response to protests in the 40-year history of the clerical regime, which arose after Iran’s 1979 Islamic Revolution.

Iran has been rocked for months by a string of anti-government protests, fueled by misrule and a spiraling economic crisis, provoking deadly state crackdowns in which demonstrators have been killed and jailed.

The internal turmoil calmed with the US killing of Major General Qassem Soleimani in a drone strike in Iraq on January 3. Anger over the assassination of the popular general, one of the most powerful men in the country, briefly united Iranians.

But a new wave of anti-government protests, this time spearheaded by angry youth, has exploded to life following the Iranian military’s shooting down of a Ukraine International Airlines passenger plane near the capital, Tehran, on January 8 that killed all 176 people on board.

Iranian authorities have been accused of attempting a cover-up after originally denying their involvement in the disaster, only to admit they shot down the plane — citing human error — after three days of mounting international uproar.

“While there are issues of accountability bound up with those economic issues, the cover-up of the Ukraine plane crash strikes at the heart of this: can Iranians trust the regime, even the Supreme Leader, in matters of life and death?” said Scott Lucas, an Iran expert at the University of Birmingham in Britain and editor of the EA WorldView website.

“Death to the Dictator”

The student protests began on the evening of January 11 following a vigil held at a university in Tehran for the victims of the downing of the Ukrainian plane. The passengers included many young Iranians who were on their way to Canada, via Ukraine, for studies.

The vigils soon turned into anti-government demonstrations as young Iranians took to the streets and gathered in squares in the capital.

Protesters shouted, “Death to the liars,” “You have no shame,” and “Death to the dictator,” a reference to Supreme Leader Ayatollah Ali Khamenei. Images also showed some protesters ripping up photographs of Soleimani.

Images on social media showed police and security forces firing tear gas, rubber bullets, and live ammunition to disperse demonstrators in Tehran. On January 12, the unrest spread outside the capital to at least a dozen cities across the country.

Anti-government protests broke out for a third consecutive day on January 13. Rallies took place at Tehran’s Sharif University of Technology and Amir Kabir University, with demonstrators chanting slogans such as “Clerics get lost,” according to social-media posts.

Images on social media showed bloodied protesters and blood on the streets. Witnesses have claimed that dozens of protesters have been wounded.

Iranian authorities have come under a storm of criticism from across the divide in Iran. Even conservatives and hard-liners have criticized the government’s handling of the disaster, accusing authorities of misleading the public.

Iranian authorities initially blamed the downing of the plane on mechanical problems and said accusations that Tehran had shot down the airliner were US propaganda. Then it admitted Iran’s military shot down the aircraft when it was mistaken for a “hostile target.”

The shootdown came days after a US drone killed Soleimani in Baghdad, an incident that led the Iranian military to fire missiles at bases housing US troops in Iraq.

In a rare public apology issued on January 12, the head of Iran’s powerful Islamic Revolutionary Guards Corps (IRGC), General Hossein Salami, begged for forgiveness. Meanwhile, Khamenei on the same day expressed his “deep sympathy” to the families of the 176 victims and called on the armed forces to “pursue probable shortcomings and guilt in the painful incident”.

But their words have done little to quell the outpouring of public anger.

Lucas said the student demonstrations had been fueled by “anger and a sense of betrayal”.

“If they think they can ‘contain’ anger at what they’ve done through crackdowns, they’re only going to fan the fires,” Bajoghli said on Twitter.

One constant in past 40 yrs is that the IRI always has the capacity to make things worse. That is one area in which their capabilities are truly bottomless.

If they think they can “contain” anger at what they’ve done through crackdowns, they’re only going to fan the fires. https://t.co/87i4QfqweQ