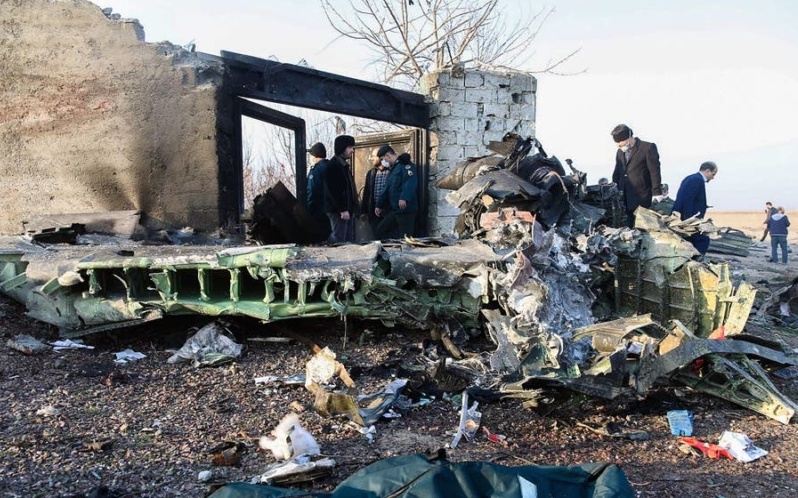 A Ukrainian investigator has given an initial assessment from Tehran:

Is Iran interested in a quality investigation? It’s not clear. The details of the aircraft continue to be bulldozed and delivered to the assembly pile.

He echoed a CBS News reporter (see below) that “hundreds of people were collecting and taking away fragments of the plane”. Investigators have not been given any fragments by Iranian officials.

“To date, we have not been provided with any evidence of the version that Iran originally put forward about the technical reasons for the incident,” he said.

Iranian authorities have been accused of bulldozing evidence at the crash site of Ukraine Interational Airlines Flight 752.

Elizabeth Palmer of the US outlet CBS News tweeted:

CBS crew just visited the #Ukrainian airlines crash site west of Tehran. Nine am local time. Virtually all pieces of the plane were removed yesterday – say locals. Scavengers now picking site clean. No security. Not cordoned off. No sign of any investigators. pic.twitter.com/hhNJyokhjq

The investigative journalism site Bellingcat is trying to reconstruct the site, using videos and photographs.

Due to this, we @bellingcat are now working to place all images and videos of this site into an interactive map, so we do not lose vital information about what was where. https://t.co/uvvd1juZqu

Iran’s Ambassador to the UK Hamid Baeidinejad has insisted, “We are fully committed to have a conclusive report on the reasons for the incident with experts on the ground from concerned countries.”

He reiterated Tehran’s line that it will work with investigators, included from the UK.

But he also derided the assessments of Western intelligence agencies, including the UK, of a shootdown of the passgenger jet, claiming they were “rushing to judgment” which “only adds to the anxiety of the families”.

He denied the crash site was being bulldozed.

Iranian ambassador to London raises voice to @SkyNews reporter who asks him about bulldozing evidence: "How told you so? How dare you accuse us based on some media reports?"
Reporter says "We saw the footage"
Ambassador: "Journalists are irresponsible"

Ukraine President Volodymyr Zelenskiy, who met Secretary of State Mike Pompeo this afternoon, welcomed the provision of US intelligence about the crash.

Zelenskiy said he was neither confirming hor denying a missile strike at this point.

ORIGINAL ENTRY: A Ukrainian jet which exploded on Wednesday, killing 176 passengers and crew, was downed by Iranian missiles, according to Western intelligence services.

The Ukraine International Airlines flight to Kyiv was seen on fire minutes after takeoff from Tehran’s Imam Khomeini Airport. Iranian officials quickly declared that the cause was engine failure.

But US intelligence services began telling media outlets on Thursday that they had “high confidence” in their information that two Russian-made missiles struck the aircraft. They said they believed that the jet was accidentally downed by an Iranian anti-aircraft battery which mistook it for a hostile warplane.

The Boeing 737 was struck hours Wednesday morning, hours after Iran’s Revolutionary Guards — retaliating for last Friday’s US assassination of Maj. Gen. Qassem Soleimani — fired more than a dozen missiles at two Iraqi bases with US personnel. The Iranians calibrated the attacks so there were no casualties, and the American military made no response.

Soon after the first reports in US media, Canada’s Prime Minister Justin Trudeau said a preliminary review pointed to the accidental downing of the jet and called for a full investigation “to be convinced beyond all doubt”.

Most of the passengers were Iranian, but 63 were Canadian or Iranian-Canadian dual nationals. Many of them were flying to Kyiv for a connecting flight to Toronto.

Donald Trump said he suspected that the downing of the plane was the result of “a mistake on the other side”.

And UK Prime Minister Boris Johnson said intelligence had identified the Iranian missiles and that the downing of the jet “may well have been unintentional”.

Video showed a missile exploding near the plane. Bellingcat geolocated the location above Parand, a Tehran suburb near the international airport, and said photographs indicated a Russian-made Tor-1 missile might have been used.

After the explosion, the flight turned back towards the airport but then plummeted to the ground.

US officials said their confidence came from satellite information combined with that from intercepted calls. The American infrared system had also detected the anti-aircraft missile fired by Russia-supported separatist fighters in eastern Ukraine that brought down Malaysia Airlines Flight MH17 in 2014, killing 298 people.

The jet that crashed from Tehran's airport on Wednesday, killing 176 people on board, was carrying entire families, award-winning scientists, university students, and a young married couple who had traveled back to Iran for their wedding. https://t.co/aGfydHtSGn pic.twitter.com/kYZIvvg4sl

The Iranian Government immediately rejected the reports. Spokesman Ali Rabaei said it was a “big lie” which was part of “psychological warfare”: “The United States is making the pain of the families worse.”

Iranian officials said the plane would have exploded if it was hit by a missile. Head of Iran Civil Aviation Organization Ali Abedzadeh insisted, “From a scientific viewpoint, it is impossible that a missile hit the Ukrainian plane.”

However, the Russian-made missiles are designed to explode near aircraft, with their shrapnel knocking a plane out of the sky, rather than directly striking the target.

Iranian State media also noted that, as late as Thursday morning, Reuters was citing “five security sources” who said the initial assessment of Western intelligence agencies was that the Ukraine jet “suffered a technical malfunction and was not brought down by a missile”.

Later versions of the Reuters story did not refer to those sources.

Suspicions were raised Wednesday with reports that Iranian authorities were refusing to turn over the black boxes from the passenger jet. But on Friday, Tehran said it would work with Ukrainian investigators and invited the US National Transportation Safety Board and Boeing to assist.

Canadian investigators are also reportedly planning to travel to Iran.

The Iranians said the black boxes were damaged by the crash and fire. However, investigators can retrieve data from damaged recorders.