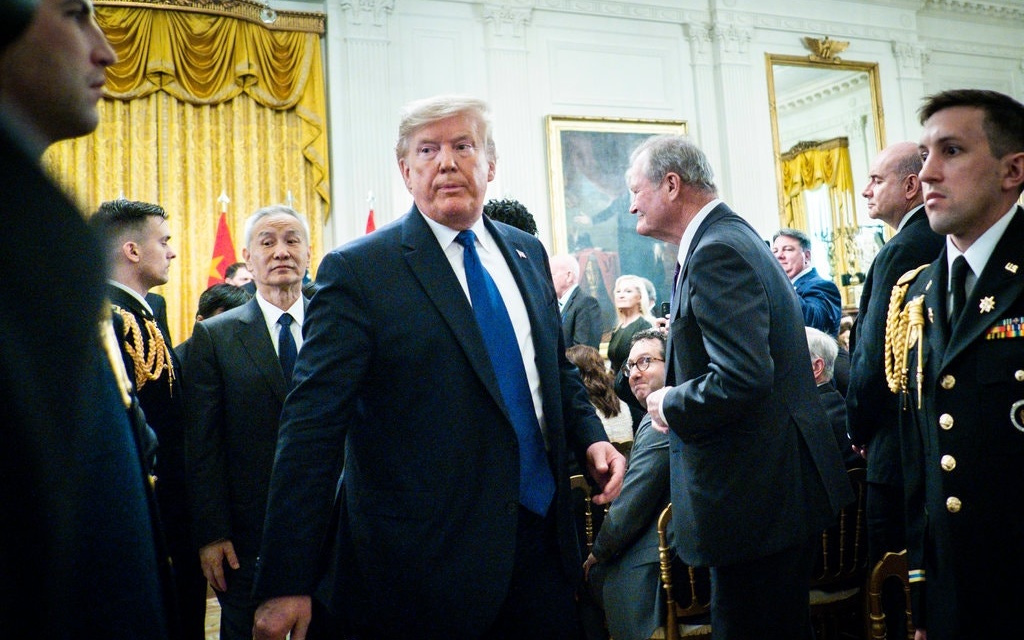 As Donald Trump goes on Senate trial for abuse of power and obstruction of justice, the Government Accountability Office says Trump broke the law by freezing Ukraine security assistance as he sought investigations to tarnish Presidential candidate Joe Biden.

The GAO said on Thursday that the Office of Management and Budget, ordered by Trump to withhold $391 million in aid, acted illegally for “a policy reason” when it defied Congress’s allocation of the funds.

“Faithful execution of the law does not permit the president to substitute his own policy priorities for those that Congress has enacted into law,” the GAO summarized. “The withholding was not a programmatic delay.”

The GAO is an independent, nonpartisan agency that works for Congress, including audits of federal spending and issuance of decisions on questions about federal contracts and budget matters.

But the GAO ruling corroborated documents and the testimony of current and former US officials that Trump defied the law when, from mid-June, he sought the aid freeze amid a 10-month campaign — led by his personal lawyer Rudy Giuliani — for the investigations damaging political rivals and covering up Russia’s involvement in the 2016 US election.

By early July, at Trump’s direction and through White House Chief of Staff Mick Mulvaney, the OMB was telling US officials of the freeze. Michael Duffey, the top political appointee at the OMB, gave the order to the Pentagon only 99 minutes after a July 25 call between Trump and Ukraine President Volodymyr Zelenskiy — the call that led to a formal complaint and then the impeachment hearings.

Despite the repeated concerns of officials that the defiance of Congress was illegal, Duffey told the military on August 30: “Clear direction from POTUS [Trump] to continue to hold.”

It was only on September 11, after the House received notice of the complaint over the July 25 call, that the White House released the assistance.

The GAO report sumamrized, “When Congress enacts appropriations, it has provided budget authority that agencies must obligate in a manner consistent with law. The Constitution vests lawmaking power with the Congress.”

Democrats used the finding to challenge the efforts of Senate Majority Leader Mitch McConnell, abandoning the Constitutional obligation of impartiality and working with the White House, to prevent any witnesses and documents at Trump’s trial.

House Speaker Nancy Pelosi said, “This important ruling further strengthens the House’s case for impeachment and removal, and reinforces the need for a fair trial in the Senate that includes documents and witnesses.”

Senate Minority Leader Chuck Schumer explained, “The GAO opinion makes clear that the documents we requested in our letter last month are even more needed now because GAO confirmed the president broke the law.”

The Senate formally opened the impeachment trial on Thursday. Supreme Court Chief Justice John Roberts, who will preside, vowed to act “according to the Constitution and the laws”.

He then administered the oath of impartiality to the 100 senators. McConnell swore to deliver “impartial justice” despite his statements dismissing the obligation.

House Intelligence Chair Rep. Adam Schiff read aloud the charges against Trump: abuse of power in the attempt to get Ukraine’s investigations and obstruction of Congress as the White House ordered current and former officials to defy subpoenas. accusing the president of a scheme to solicit foreign interference in the 2020 election for his own benefit by pressuring Ukraine to announce investigations into his political rivals, withholding $391 million in military aid and a White House meeting as leverage, and then by trying to conceal his actions from Congress.

“President Trump warrants impeachment and trial, removal from office, and disqualification to hold and enjoy any office of honor, trust, or profit under the United States,” Schiff summarized

In the 48 hours before the opening of the trial, more evidence of the Trump-Giuliani campaign came through the documents and statements of Lev Parnas, Giuliani’s now-indicted business associate who arranged and conducted meetings with current and former Ukrainian officials.

Meanwhile, the Ukraine Government announced Thursday that a criminal investigation had beenopened into “possible violations of Ukrainian law and of the Vienna Convention” by Trump’s allies in light of the documents. They cited Parnas’s staetment that US Ambassador Marie Yovanovitch, a target of the Trump-Giuliani effort, was under surveillance.

Giuliani spread disinformation to undermine Yovanovitch, who was prominent in challenging corruption. She was recalled for her post by Trump in late April.