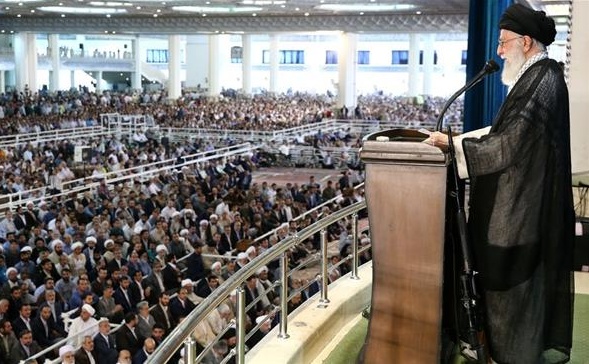 Highlighting the crisis faced by Iran’s regime after its military shot down a Ukraine passenger jet, the Supreme Leader is leading Tehran Friday Prayers.

In the address, Ayatollah Khamenei continued his effort to regain the initiative by blaming the US — an “arrogant power” — for his difficulties.

Khamenei said little about the downing of the jet, only briefly offering condolences to families of the victims, more than 100 of whom were Iranian.

Instead, he played up a token Iranian missile strike on two Iraqi bases with US personnel, retaliating for the US assassination of leading Iranian commander Maj. Gen. Qassem Soleimani but ensuring there were no American casualties.

The Supreme Leader said he had delivered on the promise of a “slap in the face” of the Trump Administration. He dismissed mass protests, after the belated regime admission of its responsibility for downing the jet, saying participants were “stooges of the United States”.

These two weeks were extraordinary and eventful. Bitter and sweet events. Lessons we learned. The Iranian people went through a lot. We delivered a slap to the US’s image as a superpower.

See also Beginner’s Guide: US-Iran Conflict…and Where It Goes Next

Khamenei’s appearance was his first at Tehran Friday Prayers since the 33rd anniversary of the Islamic Revolution in February 2012. Before that, he addressed the congregation on July 19, 2009, seeking to quell mass protests over the disputed 2009 Presidential election.

On January 3, the US assassinated Maj. Gen. Qassem Soleimani, the head of the elite Quds Forces of the Revolutionary Guards, and the leader of the Iran-backed Iraqi militia Kata’ib Hezbollah, Abu Mahdi al-Muhandis.

Five days later, Iran carried out the token retaliation on the two Iraqi bases. But hours after the attack, an Iranian air defense unit fired two missiles at Ukraine International Airlines Flight 752 soon after it took off from Imam Khominei Airport outside Tehran. Fragments from the exploding missiles downed the Boeing 737 jet, killing all 176 passengers and crew.

Iran’s military lied about the incident for three days, claiming that the cause was catastrophic engine failure and removing evidence. But under international pressure, the armed forces and President Hassan Rouhani admitted on Saturday that the flight was shot down.

The admission set out four days of protests challenging the regime, including the Supreme Leader, with chants such as “Down with the Dictator” and calls for resignations and prosecutions.

The expressions of anger and betrayal checked Iran’s political advantage after Soleimani’s assassination, with the Iraqi Parliament passing a bill for the expulsion of US troops and Tehran — seeking leverage with the European Union, Russia, and China — suspending commitments under the 2015 nuclear deal with the 5+1 Powers.

Perhaps more seriously, the demonstrations revived mass protests from November over the Government’s announcement of a sharp rise in petrol prices. On the Supreme Leader’s orders, security forces repressed the protests, killing hundreds of people and detaining thousands.

The incident has also renewed tensions between President Hassan Rouhani and the military, with the Government saying it was not informed for two days about the circumstances around the downing of the Ukraine jet.

Iranian State and semi-official media, quoting officials, said that on Friday “the Iranian nation will once again demonstrate their unity and magnificence”. The regime is hoping to bring out mass rallies of supporters.

Khamenei told his audience, “As much as we were sad about the crash, our enemy was happy about it. They thought they found an excuse to undermine the Islamic Revolutionary Guards Corps and our armed forces and question the Islamic Republic.”