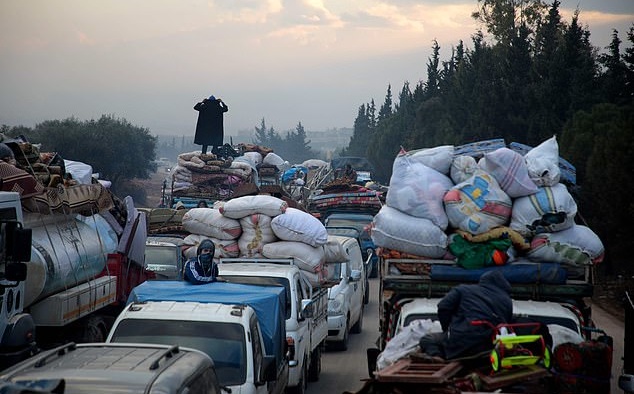 As a Russia-regime offensive kills and injures thousands of civilians and displaces more than 600,000 in northwest Syria, Donald Trump has put out a tweet.

On vacation at his Florida resort, Trump posted his first message about the renewed offensive which has forced more than 210,000 civilians to flee in Idlib Province, the last major opposition area in Syria.

“Russia, Syria, and Iran are killing, or on their way to killing, thousands of innocent civilians in Idlib Province. Don’t do it!” Trump wrote.

See also Syria Videos: The Emergency Evacuation of Ma’arat al-Num’an in the Northwest

But having ordered the withdrawal of all 1,000 US troops from Syria in October, Trump offered no possibility of American action. He did not indicate any intervention by American aircraft, whose occasional strikes in Idlib have been on hardline Islamists with suspected connections to Al Qa’eda. Nor did he suggest humanitarian assistance, days after Russia vetoed an extension of UN cross-border aid.

Instead, Trump assured, “Turkey is working hard to stop this carnage.”

Russia, Syria, and Iran are killing, or on their way to killing, thousands of innocent civilians in Idlib Province. Don’t do it! Turkey is working hard to stop this carnage.

In fact, Ankara has been powerless to halt the Russia-regime offensive, which began in late April and shattered the Turkish-Russian arrangements for a “de-escalation zone” in Idlib and northern Hama Province.

The offensive has taken almost of northern Hama and part of southern Idlib. It was paused in September by Russian President Vladimir Putin; however, it was renewing last month, with bombing and shelling killing scores of civilians, injuring hundreds, and forcing the hundreds of thousands of displacements deeper into north Idlib.

The UN estimates that more than 3 million people — about 20% of Syria’s remaining population — are in the greater Idlib area.

Russia and the Assad regime did not react to Trump’s tweet and continued to ignore the civilian toll in Idlib. The offensive is poised to occupy Ma’arat al-Num’an, 33 km (21 miles) south of Idlib city, whose 70,000 population have been evacuated from the devastated city.

Trump spent the rest of Thursday playing golf and on Twitter. He put out a series of tweets and retweets railing against his imminent trial, He insulted House Speaker Nancy Pelosi and Canadian Prime Minister Justin Trudeau, and proclaimed that he is presiding over a record US stock market.